As always, our host shared a photo prompt to guide us. This week's prompt is this inspiring image here: 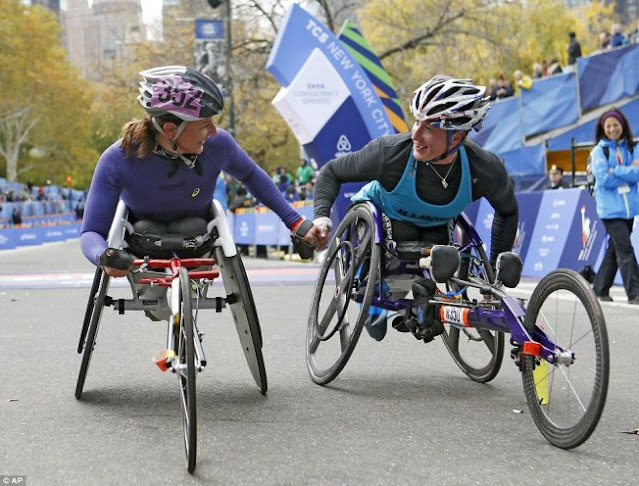 I wanted to maintain the inspiring nature of this photo, but I'm also in an autumnal mood. So, I just sort of melded those two together, added a couple of furry friends, and ended up with the poem below. It's certainly no masterpiece, but I had fun writing it nonetheless. This is one of the longest rhymes I've written in a while, and I apologize for its wordy nature. If you'd nevertheless like to read it, feel free to do so now.

The fall festival was approaching.
After all, it was autumn, not winter, summer, or spring.
Young Davey knew all about that festive, fall day,
Because his mother was planning it, right down to the parade.

After arriving home from a day of festival planning,
Davey's mother turned to her son, who sat in the yard with headphones, jamming.
Removing the music from his ears, his mother said,
"Guess what, dear? The festival's race is all set!"

The young boy shrugged and replied,
"The race isn't for people like me, and that's no lie."
"That is a lie," Davey's mother said with a frown on her face.
She added, "So, how about you sign up for the race?"

A shake of his head was Davey's only reply.
A cat jumped onto the boy's lap just as he sighed.
Petting it, Davey said, "At least you won't nag me about some race, Wilmer."
The boy ruffled the cat's fur as it curled up and purred.

Before his mother could say any more about the fall festival,
He spun around and headed to where the front porch ramp was accessible.
Just then, though, something thudded and banged as loud as a roar.
Looking that way, Davey caught sight of a moving truck at the house next door.

Wilmer stood from where he had been sleeping on Davey's lap.
Then the cat jumped off and ran to the new neighbor's, just like that.
"Wilmer, get back here!" Davey shouted after his furry friend.
He shot forward, but the cat he could not apprehend.

With a shake of his head, Davey muttered,
"You best be home before dark, Wilmer."
Though he could not see the cat, he heard its distant meow.
The boy could not help but smile, but then he frowned.

"Davey, come inside!" the boy's mother called from the door.
"It's time for supper! We're having pizza!" she said from the porch.
Given that pizza was his favorite food,
Davey spun around, sped up the ramp, and into the house he did zoom.

The next day, the moving truck was still parked next door,
And to that home's yard Wilmer did immediately run and soar.
"Wilmer!" Davey shouted, his tone far from pleased.
Whatever was drawing Wilmer away, Davey was now determined to see.

Making his way down the sidewalk and up the neighbor's driveway,
Davey could not believe his eyes when he saw Wilmer's playmate.
It was a dog, but not just any old dog, that was a fact.
A small little wheelchair was strapped to this dog's back.

A bit shocked and awed,
Davey felt his jaw drop.
He thought, This dog is just like me.
This dog uses wheels in the place of feet.

As Davey watched, his eyes wide,
A woman stepped through the front door and made it outside.
"Well, hello there!" she said to the boy.
"I just moved in here," she added. "I'm Joy."

Davey introduced himself, trying to be polite,
Which was difficult, since the dog on wheels distracted his eyes.
Finally, he was able to say, "Oh, I'm sorry about Wilmer, my cat.
He never listens to me, and, well, that's that."

The woman named Joy smiled and asked,
"That little fella is your cat?"
She added, "I was hoping I'd get to meet his human.
He's become fast friends with my boy there, whose name is Truman."

"There you are, Davey," the boy head his mother's voice say.
Then to the other woman she said, "Oh, what a pleasure to meet you! I'm Kay."
Davey's mother welcomed Joy to the neighborhood and chatted up a storm.
At one point, she even brought up the fall festival, which was her norm.

"There's nothing you won't find at the fall festival," Davey's mother said.
"There's even a race," she said with a nod of her head.
Joy pointed to Truman the dog, who spun and sped on his wheels' tread.
"My furry boy would probably love to enter that race," the woman said.

Davey's mom clapped and replied, "He'd be more than welcome to enter!"
Joy asked, "He'd be allowed even as a dog, and with his excitable temper?"
"Anyone and everyone is welcome to join!" Davey's mother said,
And then she smiled at her son and patted him on the head.

From that day on, Wilmer and Truman never missed a chance to play.
In fact, they did so nearly every day.
One morning, Davey told Wilmer he couldn't play with Truman, though.
Instead, to the fall festival his mother was making them go.

Wilmer seemed disappointed to be kept from his canine friend.
Soon enough, though, Wilmer's sadness came to an end.
Just as Davey, his mother, and Wilmer were getting in their car,
Joy came outside with Truman and walked to her own vehicle, not far.

"Will we see you at the fall festival?" Davey's mother asked the neighbor.
Joy smiled and said, "That's where we're headed now, so we'll see you sooner than later!"
Wilmer mewed and purred at the sight of his canine friend.
Even Davey himself had to smile knowing he wouldn't feel so alone at the festival then.

Davey had to admit that the fall festival looked a tad bit fun.
There were pumpkins and scarecrows and even hot cross buns.
His mother was most excited for the race, which would occur at the setting of the sun.
Davey, for one, was not all that excited to watch a bunch of people run.

When it came time for none other than that race,
A smile spread across his mother's face.
Joy joined them at the starting line,
Which was when Davey noticed that Truman wore a race tag with the number 9.

"Is Truman going to race?" Davey asked.
"Of course he is. Why wouldn't he?" Joy said, matter-of-fact.
The dog pranced and spun and barked with excitement.
Davey's mother said to her son, "There's still time to sign up, dear, if you've changed your mind."

As he continued to watch Truman the dog eagerly await his chance to dash and zoom,
Davey wondered if joining the race would be fun, or if it would be his doom.
Finally, the boy nodded and rolled his own wheelchair to the signup booth.
He placed his racing tag on his shirt, displaying the number 22.

The boy and the dog waited next to each other near the starting line.
Davey still felt uncertain, and he could only hope this would all turn out fine.
Truman licked the boy's hand as they were waved at by Joy and Davey's mother.
The boy felt camaraderie with the dog, like a brother.

Before they knew it, the race was about to start.
The boy and the dog stayed side-by-side, not willing to part.
A man standing off to the side shouted, "Ready! Set! Go!"
Davey, Truman, and the other racers started off, toe-to-toe.

As the race went on, Davey lost track of what place he was in.
He was too busy laughing as he watched Truman smile, run, and spin.
It wasn't until they reached the final curve that Davey realized the facts.
He and Truman were at the head of the pack!

Wilmer was trotting and meowing at the sidelines,
As if telling the boy and the dog to keep up with their time.
The cat ran here, there, and everywhere at his own determined pace,
No interest in following any rules of any race.

Wilmer was waiting on a bail of hay at the finish line.
He meowed and spun when Davey and Truman crossed at the same time.
There was applause and congratulations and Davey had never felt so proud.
With Truman's help, his own capabilities were now quite clear and loud. 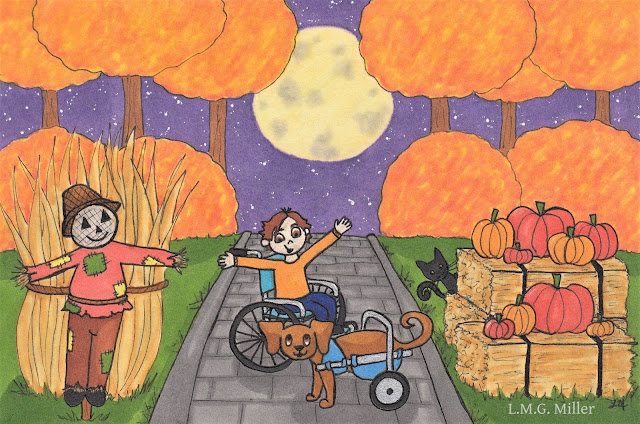 Today is also, of course a day for giving thanks. In other words, it's time for the Brian's Thankful Thursday Blog Hop.

As always, Thimble is here to share some gratitude. Can you guess what this tabby girl is thankful for today? 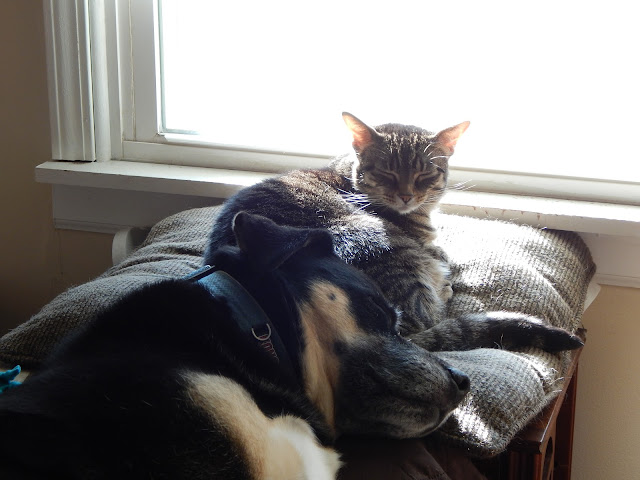 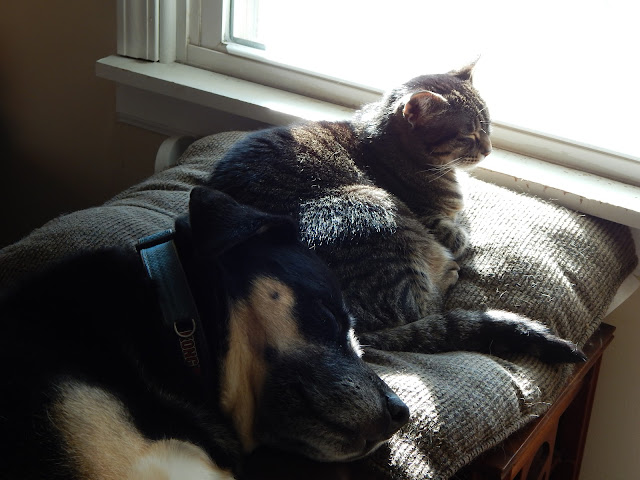 Thimble is grateful for naptime, and sunny windows, and of course her puppy sister Astrid. These two often snooze next to each other. Let's pretend it's because they truly enjoy each other's company and not because they're always fighting over the window. As you can see, though Astrid has something like 70 lbs on her, Thimble nonetheless usually wins.
***
Last but not least, how about we share the fill-in statements for tomorrow's Friendly Fill-Ins challenge? Ellen of 15andmeowing came up with the first two, and I came up with the second two.
1. I like being _________.
2. I don't want to _________, but I have to.
3. I'm counting down the days until _________.
4. _________ is a lot like _________.

Today's Pet Diabetes Awareness Month tip is to make sure you understand the factors that can affect blood glucose, especially if your furbaby has diabetes. For example, as you certainly know, food intake largely affects blood glucose levels. If your furbaby has a decreased appetite and is not eating, administering insulin can potentially lead to hypoglycemia. This is because an animal gets glucose from their food. If your furbaby is not eating and is therefore not taking in food as a source of glucose, then administering insulin, which lowers blood glucose, can lead to even lower levels of glucose. So, be sure to discuss all such factors with your veterinarian, and be sure to hold off on administering insulin if your furbaby is not eating so that hypoglycemia does not result. At the same time, also be aware of other factors that could potentially affect a diabetic cat or dog's blood glucose levels, such as vomiting and diarrhea, or even dental or other issues. Again, discuss any such concerns with your veterinarian as needed.

Posted by The Menagerie Mom at 9:42 AM

Adorable photos and pawsome poem! Mudpie is thankful she doesn't have to share her windows with anyone MOL.

Such a happy, hopeful poem! It’s good to see the pets getting along, even if it takes some doing.

What a wonderful poem for Poetic Thursday. I knew you'd have something spectacular for that photo and you sure did. A great tale (tail?). It's always a delight to see what literary confection you've whipped up for us every week. Next week will be fun I think.