As always, our poetic host shared a photo prompt to help guide. This week's prompt is this image here: 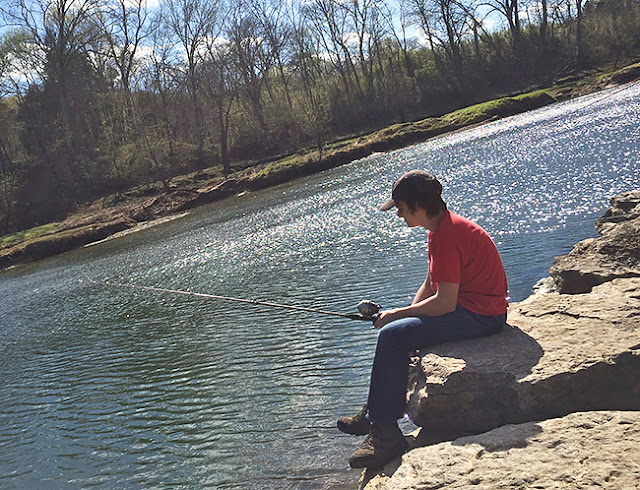 You might be annoyed but not surprised to learn that I yet again went in a kind of spooky, Halloweenish direction with this one. How? In a really weird and random way. If you'd like to read about it, here you go.

Once upon a time, I was tricked.
I thought I was invited to the lake to fish.
But that was not, in fact, the truth.
I was, instead, nothing if not duped.

When I arrived at the lake,
It was not fish we were fishing, for goodness sake.
Rather, Old Lady Laura's apple tree was right there, standing tall,
And she asked for help fishing out the apples that into the water did fall.

With a sigh, I proceeded to fish not for fish,
But instead fished for apples like the old lady wished.
Dozens upon dozens of apples were fished from that lake,
And when we were done, Old Lady Laura asked if for a treat we wished to stay.

I almost turned down the offer,
But then I smelled what she did proffer.
The scent of pastry and apples and sugar wafted to my nose,
And toward those smells my feet did make me go.

Old Lady Laura's home was, well, a bit creepy.
As if her pointy hat and robes were not freaky,
She also had black cats galore,
And, well, so much more.

Were those potion bottles over there on that shelf?
Perhaps stirred up by Old Lady Laura herself?
And what about that—my gosh, is that a skull?
Then off of the shelf one of the black cats that skull did pull.

"Please, take a seat," Old Lady Laura did say.
If it wasn't for the aroma of fresh apple pie I would not have stayed.
Then, when the pie appeared on the table, I kind of cringed.
Honestly, how scary the pie looked actually made me flinch.
That's not to say it didn't also look and smell tasty.
I simply had to look past the skull—yet another—that was the shape of the pastry.

And then the cookies were added to the table.
Can you guess what shape they were in? Are you able?
The cookies also smelled of delectable apple and cinnamon,
But they were also in the shapes of skulls, yet again.

At least Old Lady Laura had a way with flavors,
Because the look of her desserts really did them no favors.
Perhaps I was tricked a couple of times today,
But at least the reward was apple treats with a most delicious taste. 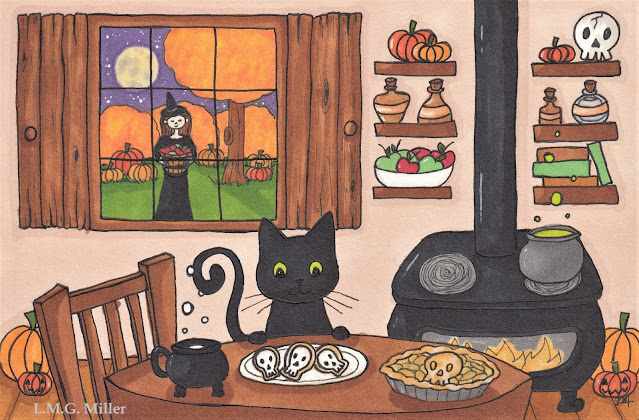 As always, Thimble is here to express some gratitude, and today she's thankful for cozy fleece blankets that she can steal from this mom of hers. 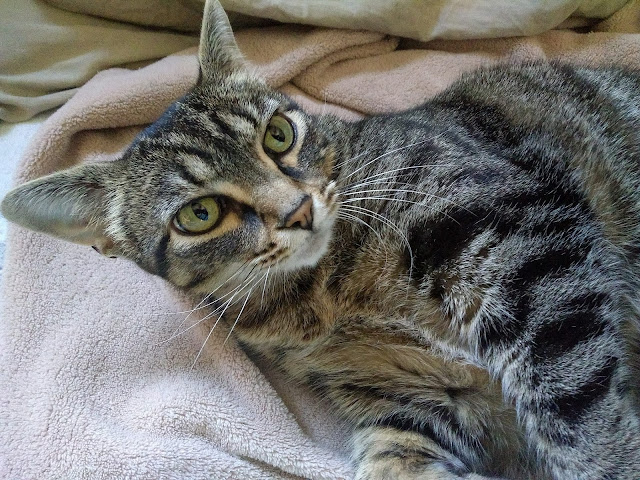 ***
Tip of the Day
Today's autumn pet safety tip is about candles. As the weather cools and holidays begin to approach, many folk feel compelled to light some cozy, deliciously-scented candles. That being said, always be careful with candles, and any open flames, around your furbabies. If you do light candles, keep them only in areas where your furbaby cannot reach. For some furbabies, putting lit candles up on a high shelf might suffice. Many cats, though, might still be able to reach candles on shelves and other similar surfaces. If you do have such a furbaby capable of this, yet you also wish to light a candle, then consider measures such as keeping your kitty or pup out of the room where the candle is lit. The long and short of it is to never leave lit candles anywhere that a furbaby can reach, and certainly not unattended. Otherwise, a kitty or pup might find themselves burnt, or might knock a candle over and increase the risk of fire. If you cannot ensure the safety of your furbaby and home, then simply refrain from lighting candles.

It's also worthwhile to note that certain items associated with candles should also be considered dangerous and off-limits to furbabies. This would include matches and lighters, for example. These items should be kept tucked safely away, just as lit candles should.
Posted by The Menagerie Mom at 11:57 AM

Thimble is a beauty!
Your story poem reminds me of the huge apple tree we had in our front yard, and how us little kids had to pick up all of the fallen apples in the grass before Dad could mow the lawn!

Cozy fleece blankies are the best! And there's nothing wrong with Hallowwen-izing everything! MOL

Great poem and drawing. And Thimble is a cutie. Excellent tips too. No candles here except battery operated.

Nice poem, i think i could look past the decorations and eat the treats, perhaps.

Thimble is a beautiful blanket thief.

Love how you worked a bit of SPOOKY into your poem for Angel Sammy's Poetry day......only you could pull that off so well!

Great job on the poem! It definitely has that Halloweenish vibe. :) Your artwork is a great accompaniment. :)