Doggie's Date with the Doctor

This poor gal has perfectly good reason to be a pouty puppy. 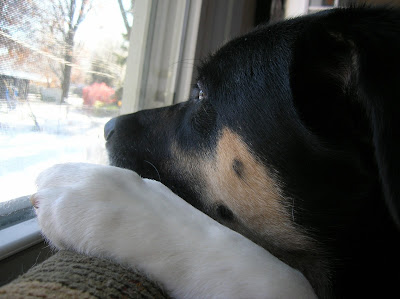 Astrid hasn't gotten to go for a walk in a few days, and she has an appointment with her vet this afternoon. And both for the same reason.

She has a sore on her paw pad that refuses to heal, the poor girl. It actually first made an appearance in October, back when my sister and I one day noticed that Astrid had a scab on one of the paw pads of her right hind leg. We didn't think much of it then, as Astrid is admittedly a bit of a klutz sometimes and has on more than one occasion given herself cuts and scrapes from run-ins with sticks, furniture, and other feisty objects she has the misfortune of crossing.

But, recently, the sore on Astrid's paw has had a significant flare-up. The worst of it really started last week, when it rained relentlessly and Astrid's paws got wet during her walks. The sore got pretty angry and began to bleed frequently, and at that point Astrid also began licking at it and thereby irritating it further, especially the more we cleaned it and drew attention to it.

So, late last week I called the vet and an appointment was scheduled for this afternoon. In the meantime, as we've been waiting for Astrid to be seen, when the sore really gets to acting up we keep it wrapped so as to protect it from further irritation. I really don't like to wrap it any more than I have to, though, as I fear the dressings will keep the sore too moist and aggravate potential infection. But, given the fact that Astrid is a stubborn little lady and does not like to leave the sore alone, and given the fact that Astrid merely walking aggravates it, it's been wrapped up quite a bit.
I'm eager to get this poor girl's foot looked at by her vet today. What bothers me most is how quickly the sore evolved from a mere scab to an inflamed protrusion on the paw pad. I'm curious if the vet will want to do a fine needle aspirate, to determine if there are any abnormal cells present in the lesion.

Aside from the sore, though, Astrid is acting like her perfectly normal, enthusiastic self (well, unless you count her dramatic three-legged hopping when we put fresh dressings on her paw). We'll see what the vet says, and I'll post an update after her vet visit.

And, of course, have a great Monday, everybuddy!
Posted by The Menagerie Mom at 8:31 AM

We are so sorry to hear that Astrid has such a sore paw and hope the vet can help.
Luv Hannah and Lucy xx xx

We are so sorry to hear that Astrid has such a sore paw and hope the vet can help.
Luv Hannah and Lucy xx xx

I hope Astrid has a good visit at the vet today and her paw soon heals. It must be so painful and aggravating for her to have it right on her paw. Poor girl ...

Thank you for your kind words about my blog. I haven't blogged much in the last few months, but am trying to get back in the habit. I have signed up to follow your blog and look forward to following your adventures!

I'm so sorry about Astrid's paw. I'm sure she's seen the vet by now. I sure hope she's on the mend and there aren't any issues with abnormal cells. Hugs and pats to her!

We're very sorry to hear about Astrid's paw. How did the vet visit go today? We hope this is something that can be treated, and that your sweet girl is all better soon. Purrs to you both.