Beside my Christmas tree, sitting in a rocking chair, is a light-up snowman. He's a happy, smiling snowman who changes colors every couple of seconds. 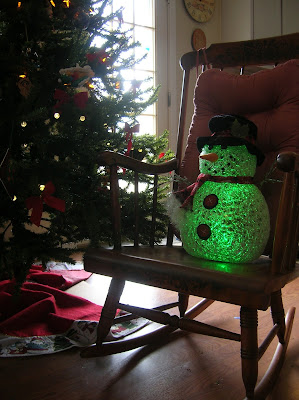 Although the snowman always minds his own business, never bothering anyone, I recently found the poor little fella like this: 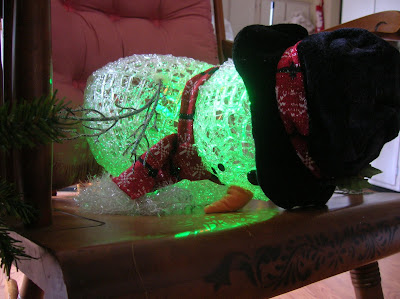 Being an inanimate object (he's no Frosty), the snowman surely didn't force himself into a face-plant upon his rocking chair. That leads me, therefore, on a hunt for the culprit. My investigation thus far has led me to two primary suspects.

The first snowman-tipping suspect was caught on camera just minutes before the crime: 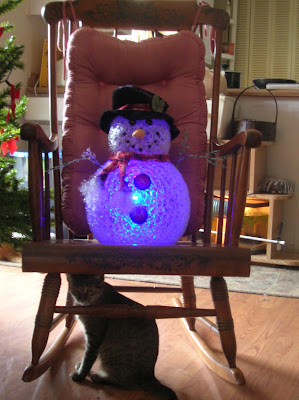 This first suspect goes by the name of Eddy. She is perhaps the prime suspect, not only due to her proximity to the snowman preceding the crime, but also because she has a known history of such crimes. A video of one of her previous, similar crimes has been released before and can be found again below.
Since no hard evidence can yet incriminate Eddy, though, further investigation was performed and led to a second suspect. 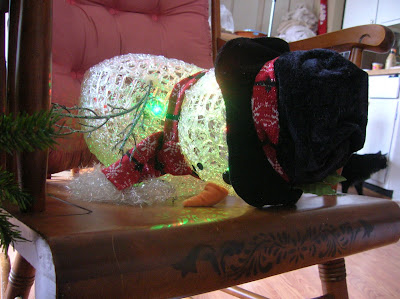 On the right-hand side of the above photograph, a black cat who goes by the name of Toby can be seen. Is this perhaps a shot of him escaping the scene of the crime? Why was he the only critter in sight upon discovery of the snowman's downfall? These are just some of the questions pointing to Toby as the potential culprit. Furthermore, a video has been uncovered of Toby not long after the unfortunate snowman was discovered. In the video, shown below, Toby displays a rather unnatural, perhaps incriminatory amount of interest in the crime scene.
So, who tipped poor Mr. Snowman? The jury's still out.
It looks as if the tipped snowman crime might be a cold case.

Happy Monday, everybuddy!
Posted by The Menagerie Mom at 1:36 AM

That is a big mystery. Who knows who did it??? My vote is for Eddy since she likes to tip things over. But they both could have joined together to do the deed. Hope the snowman gets to sit up now.

Poor Mr. Snowman being kicked around by a couple of kitties (or some other yet to be identified suspect). Perhaps, the same suspect has struck our house, too, as some of our decorations are being bullied as well.

you two kitties better get a lawyer who can prove that someone who goes by the name of either "NOT ME" or "I DON'T KNOW' did the crime.

We have no idea if it was Eddy or Toby who upset Mr. Snowman or of course it could have been your Momma.
Luv Hannah and Lucy xx xx

If we didn't know better, we'd say Ernie made a trip to your house and knocked Mr. Snowman over. That looks like something he would do.

do you think it could have possibly been a "team" effort? They both look pretty guilty to me!!! xoxo
catchatwithcarenandcody

Or maybe, the snowman wanted to see things with different angle? Though the angle of his nose right now probably wasn't on his agenda.

Cold case- MOL! I think the kitties are innocent and it is just an unstable snowman.

I'm not saying it was Eddy, but I think Toby was just making sure Mr. Snowman was okay. :)