We're celebrating yet another furbaby birthday ("maybe birthday", that is) today! Astrid's birthday was in February, and Evan and Eddy's were in April. So, that means today is my sweet little Thimble's birthday! 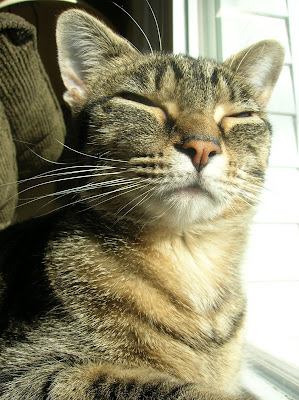 Thimble's three biological brothers (Toby, Trapper, and Talon) are also all in the family, and so of course we're celebrating their birthdays, too! 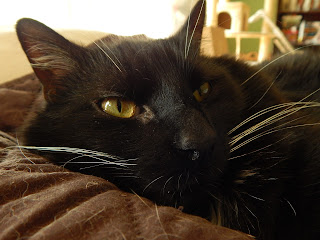 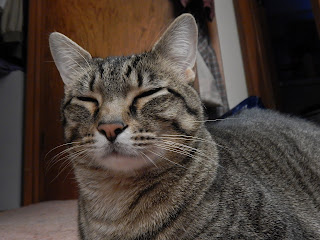 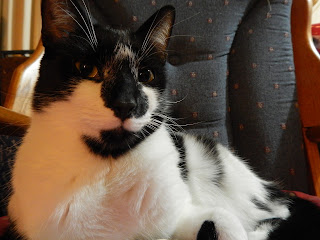 Thimble and her brothers are turning 2 years old today!

For those who don't know or don't remember, back in late May of 2014, Thimble and her brothers were abandoned by their mama cat and rescued by my grandma. The kitties were passed on to my parents, my sister, and myself to care for. At that time, the four furry little babies were right around the ripe old age of 3 weeks. 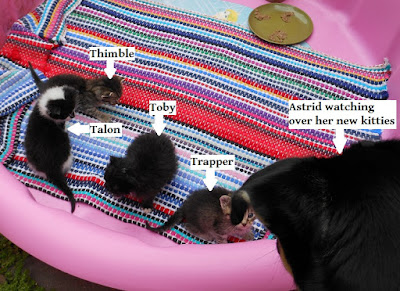 When they came to us, Thimble was just under 0.5 lb, and the boys were all just under 1 lb. My family and I intended on helping the little kittens gain strength and grow enough that they could be adopted out. Well, long story short, we failed epically. Before we knew it, my parents decided on keeping Trapper and Talon, my sister took in Toby, and I laid claim to the sweet little runt that was Thimble. 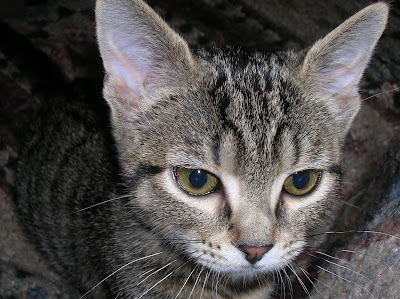 Something you probably don't know is that we had originally decided on May 7th as Thimble and her brothers' birthday. But, if you remember my post from this past Saturday, that was the day last year that I had to say goodbye to my dear Rosie. It was supposed to be the kitties' first birthday, but I couldn't do that, neither to Rosie nor to Thimble and her brothers. So May 10th was chosen instead.

And so, today, Thimble and her brothers will be feasting on lots of yummy treats and initiating some new toys. Of course, lots of extra snuggles are in store as well. 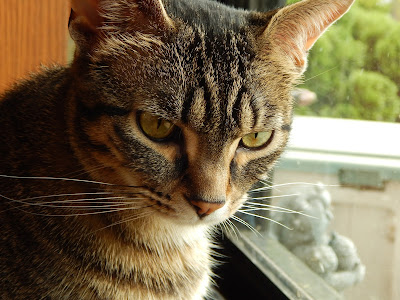 Happy birthday, my sweet little lady Thimble! (And of course to your brothers as well!) 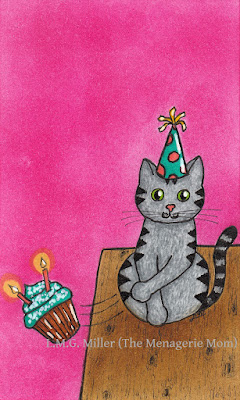 Thimble hopes that all of her furiends get some extra treats on her behalf today! And don't forget to bat some things around and knock a few things off the counter in Thimble's honor!


***
Our Tip of the Day:
It's never a bad idea to give your kitty a little extra attention and playtime, whether it be on their birthday or any day of the year. Simple ways to give your kitty a little extra interaction and fun include putting out a big paper bag for them to play in, throwing them a few extra crumpled up pieces of paper to bat around, or putting an interactive game or screensaver on a safe mobile device or TV. Of course, initiating a simple cuddle session full of scritches and belly rubs is never a bad idea either. Sparing even just a few extra minutes for one-on-one time with your kitty can make their day.
Posted by The Menagerie Mom at 6:43 AM

Oh Happy Birthday Thimble. What fun to see all of you as little tiny kittens. Astrid, looks like you kept good watch over them. I had a dog once that loved to watch kittens. You all have a super day.

Yay, Happy Birthday, Thimble! I hope your day is extra, extra special, sweet girl. And Happy Birthday to your brothers! I'm glad you're all in the family. :-)

And I like Mom's picture of the kitty and the cupcake. You're giving my kitties ideas! :-O

Happy Birthday to Thimble and family! I love the drawing you made for her, our Prancie likes to knock things off the counter too :) I am so glad your family foster failed and they are all still in the family. Best tip yet, kitties love extra playtime and snuggle time.

Happy Birthday, Thimble, Talon, Trapper and Toby. What a great day this is. We hope it is filled with lot of love, cuddles and treats for all of you. Lily Olivia's three tabby brothers were all adopted by a friend of our moms. They have all passed on at this point. XOCK, Lily Olivia, Mauricio, Misty May, Giulietta, Fiona, Astrid, Lisbeth and Calista Jo

thimble.....in yur honor we just knocked a vase off de shelves....it said antique, but we due knot noe who that iz, sew it waz sew long vase....

Happy Meowday Thimble and your brofurs. Ya' know mommy sez me was born on da same day dat da kitty befur me died. Mommy says had he not gone to heaven there would have been no reason fur us to meet, so da day is celebrated with luv and memories now. Course we also celebrate all month long in our house. It's a money thing tho'. Anyways, Hope your day is purrfect. And a Happy belated Mother's day to you.

So glad you are getting extra toys, treats and snuggles!!!

Thanks for posting on my blog

Happy Birthday Thimble! We hope you had a pawsome day!

Happy Birthday Thimble!
Happy Birthday to your siblings too!
Hope you have some extra treats!
Purrs Georgia and Julie,
Treasure and JJ

Happy birthday precious Thimble!!! Wishing you the most purrfect day ever!!!

Happy Birthday, Thimble, Toby, Trapper, and Talon! I hope you enjoyed those treats and new toys!

Pierrot is feeling Thimble's spirit and is off to look for something good to push off the counter. A full cup of water or milk always works for him.

We truly hope you all enjoyed this very special day!

Happy Birthday to Thimble! What a cute drawing to celebrate it!

Happy Birthday to Thimble, Toby, Trapper and Talon!!! Hope you all had a fanatastic day!!!!!

Happy Belated Birthday, Thimble! And to your siblings too! Don't you just love foster fails!

Sorry we're late, Thimble and Mom Lorianne. Happy belated birthday, Thimble! We hope you had a wonderful day. We are pretty sure you did, with all those great toys and treats. :)

Happy belated Birthday, Thimble ! We're sure you had a wonderful day filled with treats and cuddles ! Purrs

OhMyCat: we had saved this link so as to share PURRTH-DAY wishes (sigh) and then we was bad, badder, baddest ... and furgots to come back to share those wishes! So, happy, happy belated purrthday wishies from us to you sweet friends.
Hugs, luv ... the Zoolatry furries.