I try to be a fair mom and make sure that all of my furbabies get at least one post focusing on them each week. But, I'll be the first to admit that sometimes my active Eddy makes this very difficult, if not downright impossible. Some weeks, getting a still shot of tireless Eddy is more like getting a sighting of the Loch Ness monster itself.

This week, Eddy was determined to make it especially hard on me. Don't ask me why, but the little rascal would actually pose for me this time around, but then just about every single shot turned out a little something like this: 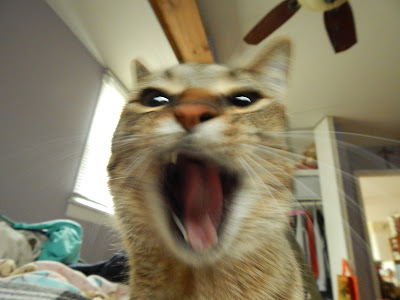 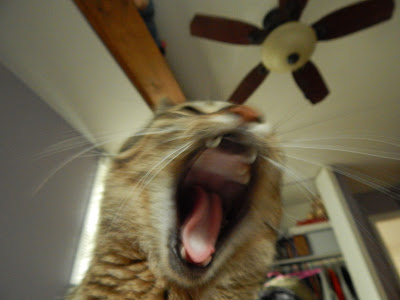 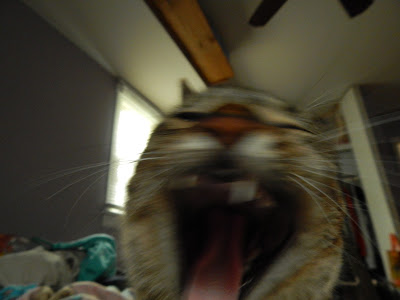 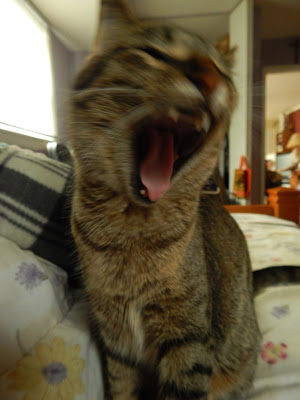 
***
Our Tip of the Day:
Never forgot the importance and benefits of positive reinforcement. If you dog or cat does something you want to enforce or encourage, such as responds positively to a command, be sure to immediately reward them. The reward can be in a number of forms, such as a treat, a toy, verbal praise, or affection. When your furaby learns that doing the favorable deed earns them a reward, they will feel encouraged to continue doing it.
Posted by The Menagerie Mom at 6:44 AM

Oh Eddy, just tell your Mom you are just trying to sing her a nice song. We could hear you all the way over here. You all have a fantastic day.

Good job Eddy, you have very nice tongue and teeth. You are just trying to remind us of the importance of dental health. Great tip, my cats will do anything for a treat.

Oh, Eddy, you sure did make me smile today! :-) You look like you are belting out a song for mom.

MOL ! You made us smile, Eddy ! Purrs

Hehehehee... MY Peep #1 has trouble getting pictures of me even when I'm standing still. Purrs, Seville.

Hehehehee... MY Peep #1 has trouble getting pictures of me even when I'm standing still. Purrs, Seville.

HA! Those are fantastic...Eddy was preparing for the Blooper Roundup next week!

That is a reason TBT gets lots of pictures of us asleep, LOL!

These photos are absolutely adorable and so funny. I wish I could evenly spread out the posts among all the fur babies, but some just don't seem to allow me to get photos, like Misty May. I don't think these are photo fails but totally photo fun. XOCK, Lily Olivia, Mauricio, Misty May, Giulietta, Fiona, Astrid, Lisbeth and Calista Jo

We actually LOVE these pictures of sweet Eddy. :)

I know they weren't what you were trying for, but they are so much fun.