We received a fun package in the mail last week. What was it, you ask? The traveling shades of none other than Phoebe from 15andmeowing! 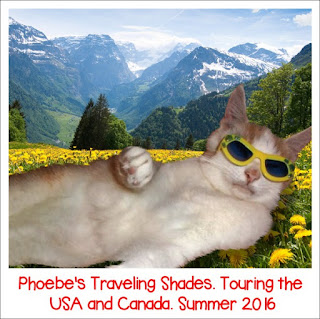 These cool shades have been traveling around this summer, and we were quite excited to have our turn with them! The furbabies around here tried their hands paws at posing with Phoebe's sunglasses, and they each asked if they could have their own day to show off their cool looks. Who am I to say no to them?

Being Mancat Monday, the first to show off the shades is Evan. 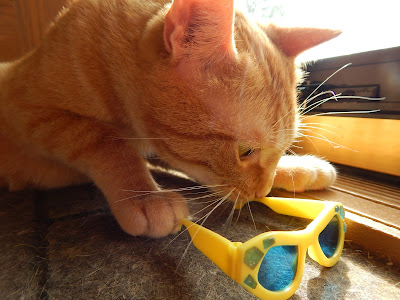 Many of you know that Evan's favorite spot to sit is the sunny front door. So, basking in that beloved sun puddle of his, he sure was excited when he saw this gorgeous pair of shades to try on. 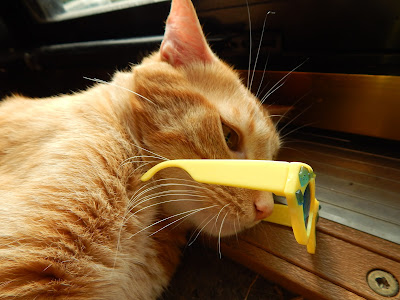 Try as he might, though, Evan just couldn't seem to get those sunglasses to sit right. 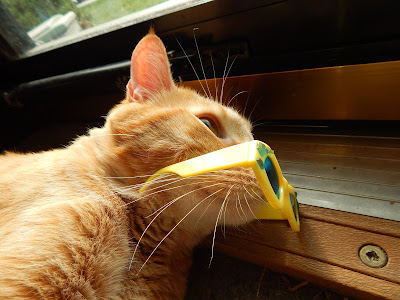 Where are opposable thumbs when a boy needs them? 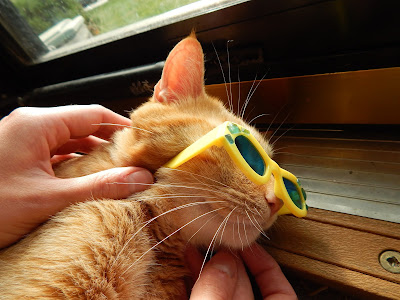 With his mom behind the camera, Evan's auntie loaned him a hand. 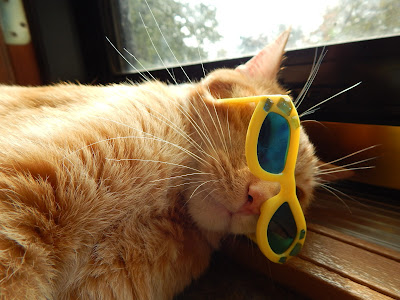 Ah, that's much better. So, does Evan make one cool dude or what? Evan says thank you, Phoebe, for sharing your shades with us!

As for our last bit of business, not only was Evan the first of the furbabies around here to show off Phoebe's cool shades, but he also gets to star in today's drawing for JNW's Halloween Challenge. The prompt for today is treats, which made Evan more than happy. 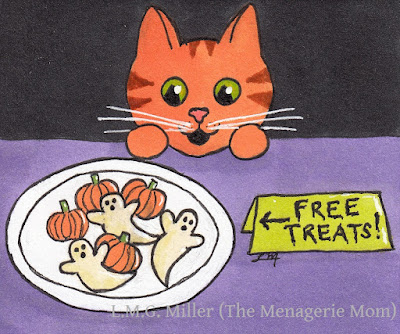 
***
Our Tip of the Day:
Today's tip is another quick and simple reminder, and that is to please remember that many cats are actually lactose intolerant, meaning they cannot properly digest most dairy products. In lactose intolerant cats, consuming milk or other items with lactose can result in issues such as diarrhea. For these reasons, it might be best to avoid feeding your cat foods and drink high in lactose, especially in kitties that have previously shown signs of lactose intolerance.
Posted by The Menagerie Mom at 12:03 AM

Oh Evan, you just look so handsome in those sunglasses. And handsome too. Good job wearing them. We so like the picture too. You all have a great Monday.

Evan ... you are one cool cat in those shades! Bear is not a fan of cheese, but my first kitty, Kitty couldn't get enough (I don't think she was lactose intolerant luckily).

Evan! You wore those shades well. And looking quite cool, too.

You look so cool in those shades, Evan ! Purrs

Phoebe and I both thank you for being such a good sport. You look great in the shades Evan.And thanks to your Auntie for helping you get them on. I love the drawing too, very cute. Joanie loves those same things Evan :) Great tip too, poor Spooky always wanted butter and cream, but it always disagreed with him.

Oh, Evan, you are such the cool dude! Connor will be so impressed when he sees these photos. Your mom did a great drawing of you. (P.S. I like butter and cheddar cheese too!)

Evan looks great in those shades. And what a pawsum sun puddle. Have a pawsum day.

You look so cute in your shades, Evan! Those look like yummy treats too :)

Evan is certainly stylin'. TW found out the hard wasy last Thanksgiving that, like her, I'm lactose intolerant. I'd never had milk before I got to lick some delapidated milk she was baking with. Nicky used to love it, apparently.

Evan, you look so cool in those shades! This is the first post I've seen of the traveling sunglasses. I also really like the drawing of you with the treats!

Too cute! You make those sunglasses look good!