Evan's feeling quite reminiscent this week. 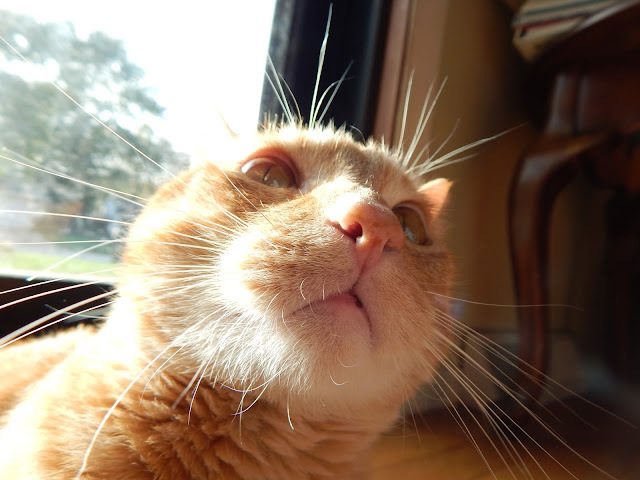 You see, here for us in the US, Turkey Day (aka, Thanksgiving) is this very Thursday. And for Evan, turkeys hold a special, if not a tad bit unorthodox, meaning. Let us explain.

For those who have not already had this story forced on them roughly a gazillion times, I first met Evan when he was just about 6 weeks of age. I worked at a cat clinic at the time, and I was the first to arrive to work on that particular day. What I found at the front door was a carrier containing a tiny orange tabby kitten, who was dragging his hind legs and hissing up a storm. A letter attached to the carrier explained that he had been a barn kitten, and that a coyote had made its way into the barn, killed his mother cat and litter mates, and left him paralyzed in the hind legs.

But did you know that there's bit of an interesting detail that I don't usually include in Evan's origin story? I believe I've mentioned this detail perhaps once before, in brief, way back when. This detail involves none other than a turkey.

At that clinic where I worked, there was roughly a one-year span of time when a wild turkey would randomly show up on the premises. The bird didn't care that the clinic was located on a busy corner with constant traffic, or that a heavily trafficked railroad track was just across the way as well. Ignoring those cars and trains, the turkey would show up maybe once a month, make countless laps around the building, happily tormenting anyone and everyone that dared encroach on its territory.

Anyway, as I mentioned, the turkey usually showed up roughly one day a month. I don't know where it came from, or why, but I do know that on the day I found Evan abandoned at the clinic's front door, I found the turkey there as well.

This turkey, it was loud. Very, very loud. It always gobbled and gobbled and gobbled the entire time it patrolled the premises. I often find myself wondering how long Evan sat out there, listening to the hollering bird, watching it strut and shake its tail feathers. I remember feeling bad for Evan, to be honest, because that turkey loved the art of intimidation.

Perhaps all of the above is why, for Evan's Thanksgiving week art, I felt compelled to draw this happy little friendship: 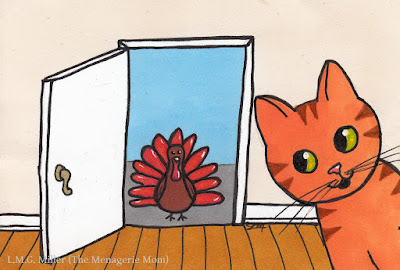 
***
Our Tip of the Day:
Although instinct tells many of us to jump in and rescue baby animal that we see abandoned, please do try and assess any such situation before taking immediate action. This relates to many a kind of animal, including cats and squirrels, and even raccoons and such. Sometimes, a mother animal is nearby and simply left its baby in order to go search for food. Of course, if the baby is in immediate or obvious danger, your swift help may prove necessary and lifesaving. In other cases, though, we might think we're helping but are actually removing a baby from its much needed mother. If you find yourself facing such a situation, therefore, take a look around, see if there are signs that the mother might be nearby, consider whether the baby is somewhere that a mother might have placed it for safekeeping, or if it's somewhere it might have wandered while lost and alone. What's more, also always remember to consider the type of animal and its natural habitat. Squirrels and raccoons, for example, are wildlife, and so unnecessarily removing a baby from the wild can be very detrimental. As for cats, on the other hand, they are a domesticated species, and so rescuing them can prove beneficial to them and their livelihood. For the latter, when possible, rescue of the baby and mother can benefit both. Rescuing an animal can be a wonderful, rewarding accomplishment, if done in proper circumstances. For that reason, please familiarize yourself with knowledge on this topic, and perhaps research groups in your area that can assist in cases of animal rescues from the wild.
Posted by The Menagerie Mom at 4:23 AM

Silly turkey. Evan, we are so glad that your Mom was the first to find you. You sure did end up in a wonderful home.

What a funny story! Poor Evan having to listen to that turkey making all that noise.

Poor Evan! I've never encountered a turkey, but I've heard they can be pretty intimidating.

Poor Evan ... he must've been scared and confused. I'm guessing he'd rather have his turkey in his food bowl than as a friend ;)

Sweetest of sweet Evan, we love hearing your story and hope you decided that you like turkeys after all. Great tip of the day! (We're looking at you, people in our area who keep picking up fawns in the woods and taking them home, in their cars!)

dood....we iz troo lee sorree ya had ta listen two all de NOIZ frum that burd N we iz buzzed glad ya mom rezcued ewe frum it.... N for like a bazillion other reezonz two ♥♥♥

Evan, I am so glad that your Mom found you and ended up making you her own.

What a sweet story! And Evan was so, so lucky to have been found by YOU!

Sorry I am so late today. Evan is such a cutie and I love the drawing you made of him and the turkey. His story is so sad, I am so glad he has such a loving home now. Great tip too. One of my friends rescued a baby bunny this year, her landlord's dog killed the mama and other baby so she rescued it. It is very rare for them to survive without their Moms. Now that he doesn't understand the outside dangers, she is keeping him.

We love that story. But we're glad Evan lives there with you where he is loved and safe. And not out with that wild turkey!

Okay, who is cutting onions in here?? *wipes eye*