While this mom of theirs goes out to exercise her privilege and right to vote for the 45th President of the United States of America, the kitties around here recently took on a different sort of vote.

As part of Chewy.com's Blogger Outreach Program, I was excited to see a Kong® Naturals™ incline cat scratcher as an option up for review. Let's be honest, I knew the kitties around here would love this thing, and so I happily chose it for them.

Just look at it. 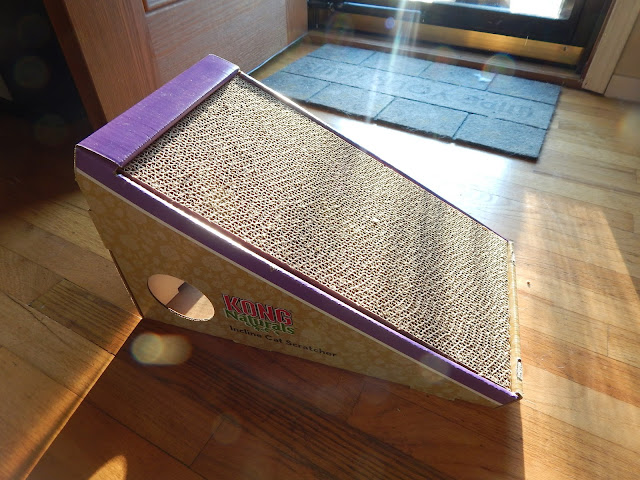 The first thing I noticed is that the scratcher is larger than I expected. But that's probably just because the plain-as-day specs (19.25" x 7.5" x 1.5") plastered right there on its Chewy.com description failed to register in my mind. Regardless, my kitties sure aren't complaining about the size of this scratcher, on which they can both stand and scratch at the same time.

Not only is this scratcher sizable and built to entice kitties to utilize it rather than the furniture for their instinctive claw-sharpening behavior, but it is also made from environmentally friendly, recycled materials, as well as made right here in our very own USA. And, it even comes with its own paraphernalia catnip! 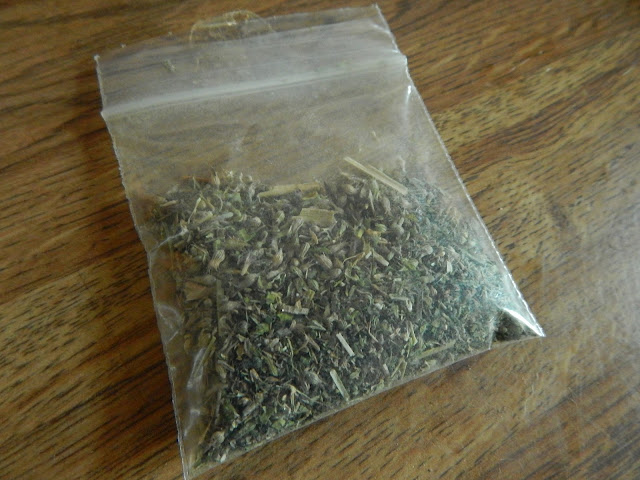 So, cutting to the chase, I rubbed some of the provided niptastic goodness on the scratcher, set it down on the floor, and the swarms started coming. 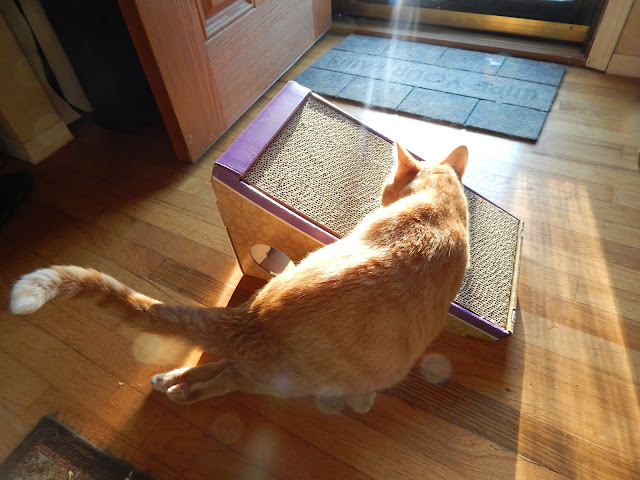 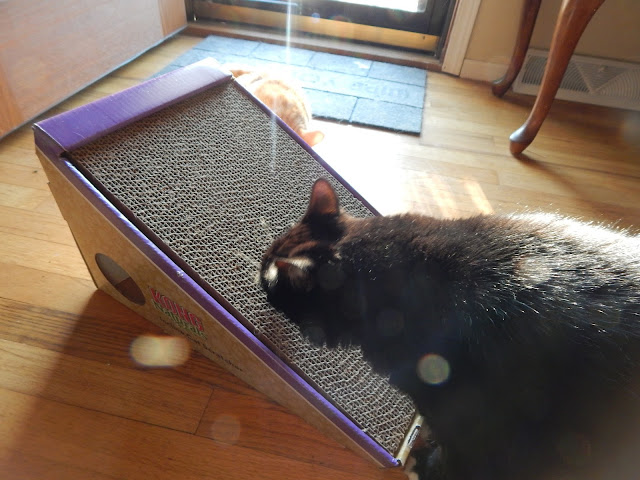 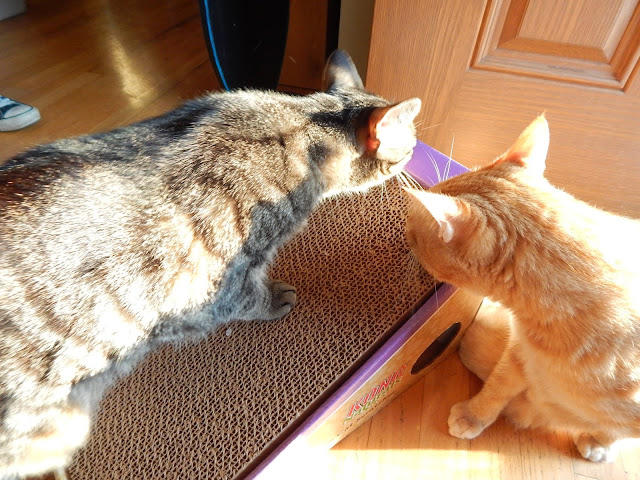 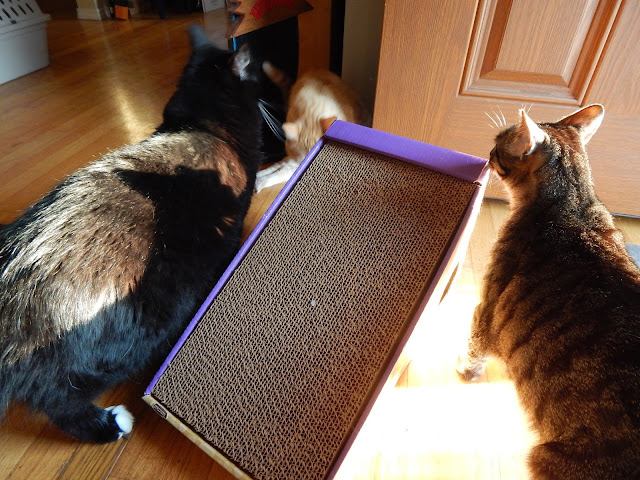 In summary, the felines around here went wild for this scratcher. Since going wild means lots of motion and crazy time, I don't have all that many viable shots of them actually using it. But, take my word for it, the above photos of them sniffing and standing around it and testing it out are nothing compared to the wild time they all had scratching and climbing this thing. Honestly, I'll probably have to buy a couple more so that they won't quarrel over this one. This thing might be big, but it can't take on 4 cats at one time.

Now, there is just one complaint I have about this scratcher. If you saw Dezi and Raena's review of this product over at Dezi's World, you might already remember being advised about the dangling toy attached to the interior of this scratcher, that the kitties can bat at through some circular cut-outs on the sides. Well, Dezi and Raena explained that they (adorable kitten Raena, that is) removed that little dangling crinkly ball in no time. Their mom Audra confiscated it, and advised their readers to do the same should they find themselves in possession of one of these fun scratchers. Well, long story short, Dezi and Raena's mom Audra is right.

You see, the aforementiond dangling toy is attached to a somewhat flimsy flap of cardboard by an elastic string. 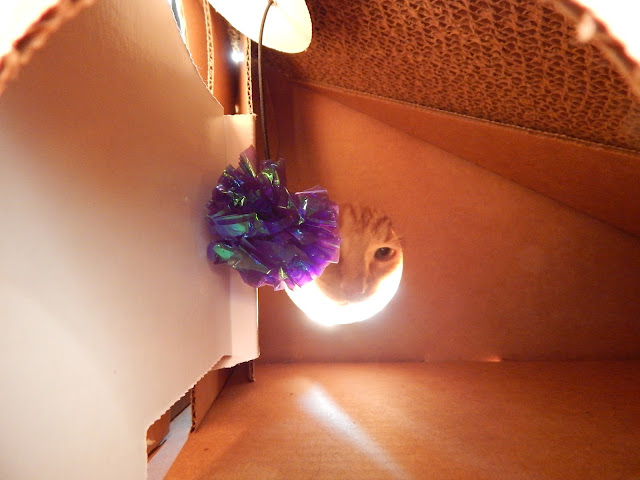 That photo above was taken just moments after I first set the scratcher down for the kitties to review, and just moments before that peeping tom Evan ourtright destroyed the blissfully unaware dangly ball. Since I was monitoring their first play session with the scratcher, I went ahead and let the flimsy little dangly toy remain in place at first. I had already planned on taking Dezi and Raena's mom Audra's advice to remove the toy before I let the kitties have at it unsupervised, but, Evan took care of it for me first. 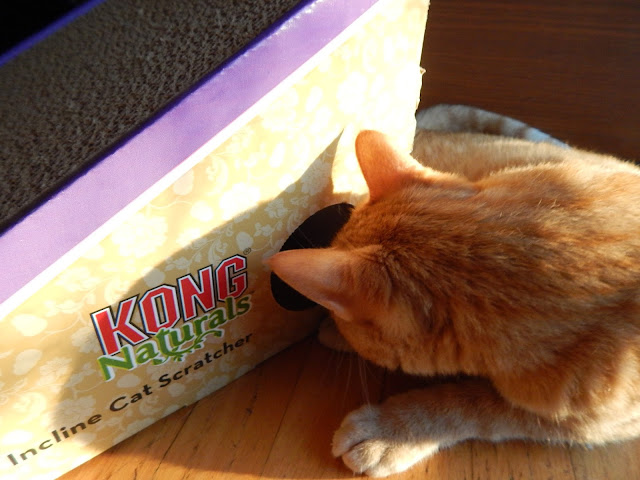 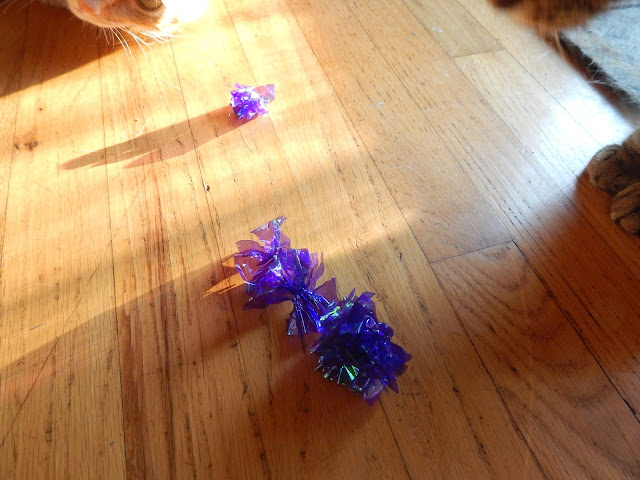 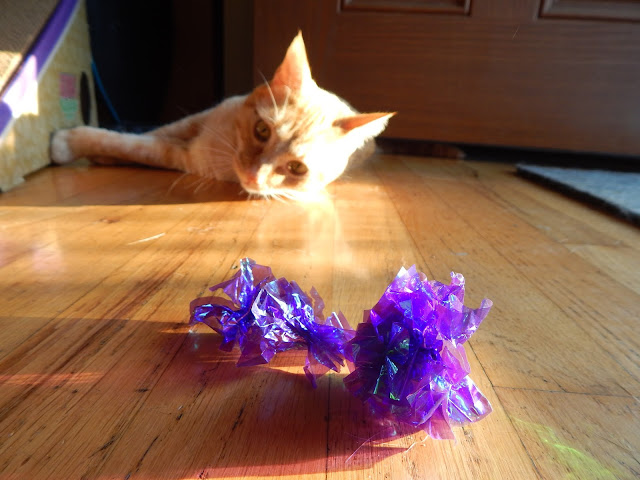 So, it's a no-go with the dangling crinkle toy. But, that's okay, because this scratcher is still loads of fun for the kitties even without it.

I'll take a short moment now to note that, unsurprisingly, I have no viable shots of active Eddy to share using this scratcher. But, just like the other kitteis here, she does use it, and loves it.

So, each kitty in this house gives 4 paws up to the Kong® Naturals™ incline scratcher. That's 16 paws up from us!


(Disclaimer: As members of the Chewy.com Blogger Outreach Program, we received a Kong® Naturals™ incline cat scratcher in exchange for an honest review. All opinions are our own. We only review products that we believe will be of interest to our readers, and we never recommend a product that we do not believe in.)


Now, to all of the US humans out there, please go out and vote! I'll admit that I am not one to post much in the way of political material on social media, so all I will say is that voting is a privilege and a right. So, regardless of which side of the fence you're on, please let your voice be heard and vote!

That being said, today's art is my best attempt at a political piece. 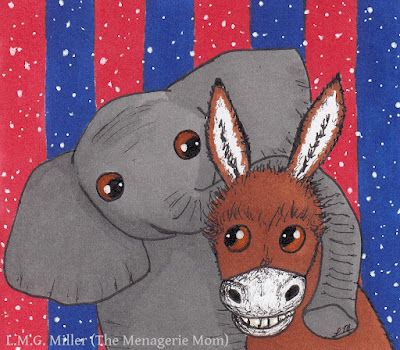 Happy Tuesday! And, our US furiends, don't forget to VOTE!


***
Our Tip of the Day:
We all know that our kitties love to scratch, which is why cat scratchers and scratching posts are so popular for our felines (not to mention that they can save your furniture some damage). When shopping for a cat scratcher or scratching post, though, please be cautious and aware of the materials used and how it is constructed. When it comes to the scratchable material, common and usually safe ones include corrugated cardboard, carpet, and sisal rope. Some scratchers use wood and other materials, which can be perfectly fine and safe in some cases. However, be cautious if your kitty scratches the wood so much that it begins to splinter, which can cause damage not only to their paws but also to their intestinal tract if they for any reason ingest it. What's more, if and when possible, perhaps do investigate a little into how the scratcher is constructed. For example, is the scratcher held together with staples, and do those staples stick out where your kitty could catch a claw or injure his or herself? If so, perhaps move on to considering a different one. Of course, such cognizance and caution should be used when purchasing any toys for your furbabies. And, as always, it also comes down to the fact that you know your furbaby best, so pick and choose what will work for them!
Posted by The Menagerie Mom at 5:33 AM

That does look like a great scratcher. Love that drawing. It is so perfect for today.

Excellent review. We have this scratcher and the toy is still attached ( my cats are lazy), but I should remove it just in case. Sammy is almost 20 pounds and he uses it the most so it is a good size. I love your political drawing- if only both parties could get along so well. :) Great tip too.

Evan doesn't look the least bit sorry :) Glad all of the kitties enjoyed it!

Great review ! That looks like a good scratcher ! Purrs

MOL Evan!!!! You destroyed dat crinkly ball. We had da crinkly ball fur a couple of days befur we furinally made a mess with it. But da scratcher is purretty pawsum isn't it. Glad ya'll enjoyed it too. We think Kong shoulda stopped at da scratcher itself. It's great enuff without da dangerous dangly lastic. But dat's okay with some of us tellin' 'bout it hopefully no kitties will be harmed in da playin' with it. Fanks fur da shout out. We's been behind lately with all da commentin' purroblems and Raena bein'...well Raena. MOL And then mommy had to go vote today, so we's really runnin' late. But great review. Big hugs fur all. Have a pawsum week.

That's definitely a pawsome scratcher! Mudpie has never had one with an incline and I bet she'd love it. Adore your artwork...today has been such a stressful day and it only promises to get worse.

Glad they liked it