Our contribution to today's Sunday Selfie blog hop, hosted by our pals over at The Cat on My Head, is courtesy of a dear guest. 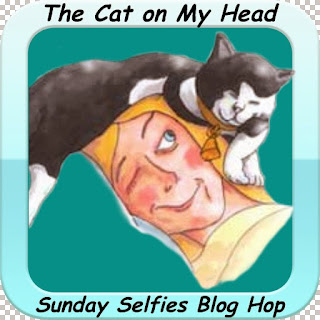 You all know housemate Toby, right? He is one of Thimble's brothers. But, he's not the guest today.

And who remembers when, not long ago, we had a cameo from one of Thimble's other brothers, her look-a-like Trapper? That big boy owns my parents (Thimble's Gammy and Pawpaw, that is), but neither is he our guest today.

So, then, who is our guest today? It's Thimble's third and final brother, Talon! 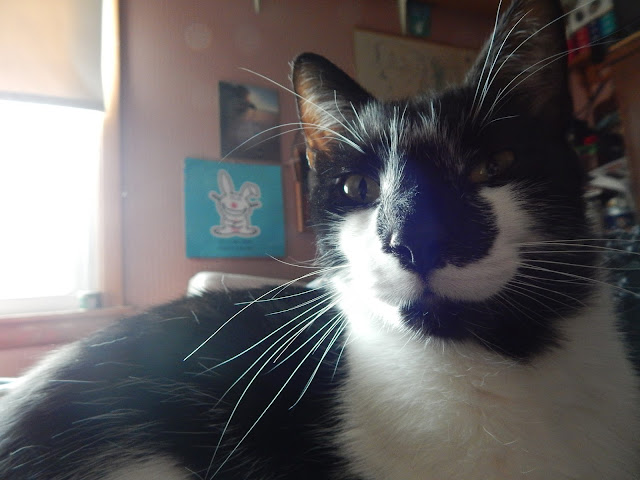 Like big boy Trapper, Talon owns my parents. Well, more like he co-owns them alongside his six furry siblings. What's more, I must say, I am seriously addicted to this boy. 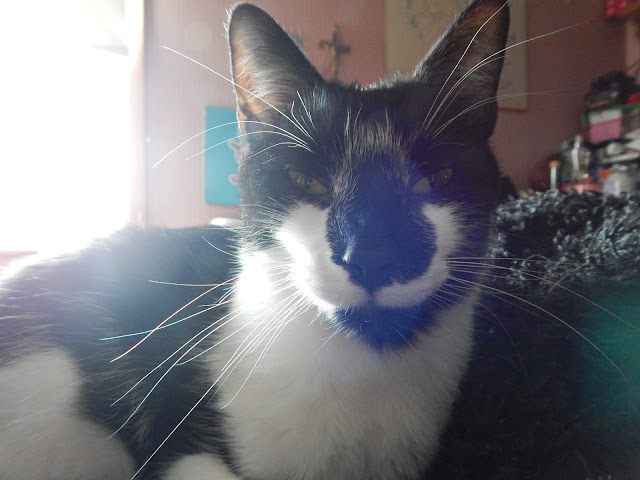 Putting it simply, Talon is one cool cat, and he is the ultimate embodiment of unconditional love. Seriously, this boy loves everyone and everything. 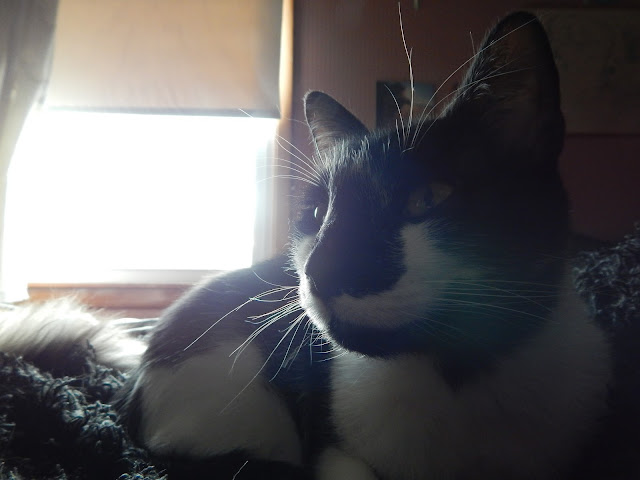 No matter who or what walks through my parents' front door, whether it be a human or a cat or a dog or pretty much whatever, and whether it be someone or something familiar or strange, Talon is always the first to greet them. And he greets each and every single one of these visitors with boundless joy and affection. 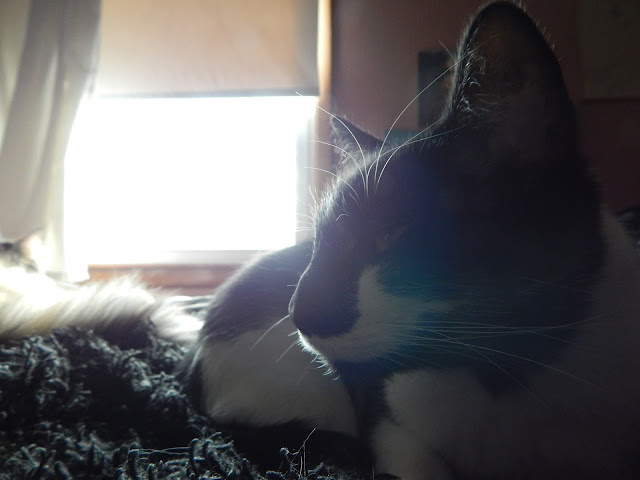 You would never guess that sweet and happy Talon earned that sharp name of his for a reason. Back when my parents, sister, and I first met this litter of tiny kittens and began bottle feeding them, Talon was by far the biggest challenge to feed. Not because he didn't take to the bottle or eat well, but because the sight of the bottle would spur this boy to claw and tear his way to that formula, and the hand that was feeding him usually ended up just a tad bit bloody. And so, Talon became this now perfect and loving boy's moniker.


Well, now that Talon got to show off his handsome face, we'll share our art of the day. This is just a quick little doodle inspired by, well, blogging with cats. 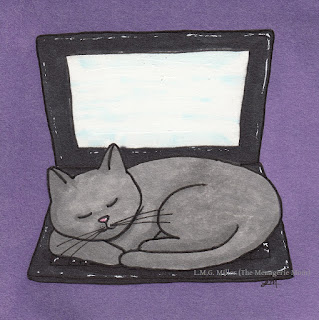 We're sending warm wishes to all of our furiends!


***
Our Tip of the Day:
Does your kitty like to help you while you're at the computer, such as by snoozing on the keyboard, or in that throne of a computer chair? If so, perhaps try some tricks that will make both you and your kitty happy. So that your kitty can feel included while also allowing you to use the computer in comfort, try providing your kitty a place of his or her own beside the computer. You could try putting a blanket or a box right next to the computer, such as by the keyboard, so that they can stop and snooze there instead of on the keyboard itself. If your kitty is more of a computer chair thief, then perhaps pull up a second chair for your kitty, and make it extra enticing with a soft and cozy blanket as a cushion, or an item of your clothing on which they can sleep. You can also try some distraction techniques, such as putting interactive toys or even a cat tree near the computer, so that your kitty might choose those over your computer. If possible, you might even try switching on the TV or another nearby device to a channel or video (perhaps some bird TV, for example) that might move your kitty's interest to it rather than your own computer. With a little bit of effort, you just might be able to win the war for the computer!
Posted by The Menagerie Mom at 7:08 AM

Talon is such a cutie. That is funny how he got his name, I am glad he doesn't live up to it now. Very cute drawing and great tip. I wish that would work for Joanie, I use the laptop on the couch and she insists on being on my lap. There are lots of comfy spots next to me, but she will just keep stepping on the laptop until I move it to the side :)

Talon, you are one handsome boy. Glad you own the parents. That is always good. It is fun seeing Thimble's brothers. You all have a wonderful Sunday.

Talon is so handsome, and sounds like such a sweet and lovable dude! We would never have guessed how he got his name -- such a funny story. :)

Talon, you have an amazing face!

Wow! Not only is Talon incredibly handsome, he is amazingly confident, something I am not with strangers which is why my claws are always sharp. You all have a great week. Purrs, ERin

I thought he was named Talon because of that claw-like marking on our right side when looking at him :) He is so handsome (I love the "claw-like marking and the upside down u on his forehead)! It's funny that Toby and him look similar and Thimble and Trapper look similar - yet the pairs look nothing alike. Makes you wonder if there were two different daddies (sorry, feline genetics is fascinating to me). Thimble and her brothers are beautiful ... what a litter! :)

WOW! Talon certainly has the looks. Pawkisses for a Happy Sunday :) <3

Talon you are a magnificent and handsome boy! What great selfies.

What a sweetheart. I love your big, extended fur family. And your artwork is just purr-fect for a cat blog :)

Talon looks so much like our sweet Elsie who passed in September. She had similar markings on her nose.

He's so handsome! And he has the perfect name! I used to have a cat named Scratches.

Awww Talon sound Pawsome....I wonder what he would think of me?xx Speedy

Talon looks wonderful. Thank you for the story about him - what a past, and what a present!

I was thinking about how clever the name "Talon" is. After reading the post, I can definitely see how he earned that name! He is a handsome boy!!! catchatwithcarenandcody

Am I the only one who thinks that Talon is sporting a feline version of a mustache?!?! So adorable. And what a sweetheart he seems to be. Wish I could get some of that love in person!