As we're sure most of you already know, today is Remember Me Thursday. The Remember Me Thursday website explains this day with one poignant sentence: "Remember Me ThursdayⓇ is a global awareness campaign uniting individuals and pet adoption organizations around the world as an unstoppable, integrated voice for orphan pets to live in forever homes, not die waiting for them." Just like most of you, around here we are huge proponents of adopting kitties, pups, and other companions from shelters and rescues. That's why our post today is indeed centered on this significant topic.

Just as they do every week, our hosts offered us a photo prompt for our poems this week. It's this sweet image here:

I took some liberties on this one. I used this image as my starting point, and then tried to figure out a way to turn it into a little tale for Remember Me Thursday. The result is meant to not only shine light on animal adoption, but even more specifically on the adoption of those kitties and pups who may be more often passed up at a shelter.

Once upon a time, there were two little girls.
They were sisters, and their names were Opal and Pearl.
Opal was five and Pearl all but four,
When they found themselves standing at that magical door.

On the other side of that door were surely some new furry friends.
It mattered not to the Opal and Pearl that they hadn't met them yet.
And so, quickly, they pushed that grand door open,
Seeking that for which they were hoping.

On the other side of that door existed a wonderful place,
Where the sisters were greeted by a many furry and whiskered face.
Opal and Pearl could not help but say, "Awwww!"
After all, just look at all those cute little paws!

Opal and Pearl were not certain what they sought just quite yet.
They simply knew they wanted a friend to spoil and pet.
A woman passing by asked what they were after,
To which Pearl replied, "A friend to give us smiles and laughter!"

"Well, you've come to the right place," the woman said,
"This shelter is full of animals waiting for a home with a bed."
Then, down a corridor Opal and Pearl walked as the woman led.
The sounds of meowing and barking filled the ears on their heads.

The room they finally entered held so much to be seen.
There were cats, dogs, rabbits, and even birds who did preen.
In cages these cute creatures did play, eat, sleep, and wait.
Some had their space to themselves, while others sat with a mate.

Opal and Pearl walked up and down and looked all about.
How were they supposed to pick just one or two friends out?
Then they noticed one particular cage was getting no attention at all.
Not a single visitor stayed long at that cage against the back wall.

Opal and Pearl headed that way,
To see which furry friend in that cage did stay.
Two furry feline friends were nestled within, in fact,
Tucked all the way in the very, very way back.

"Hello there!" Pearl called into the cage.
A sign nearby indicated their two-digit age.
In the journey of life, these two cats were in a very late stage.
Opal and Pearl also learned the two were named Basil and Sage.
They were both a bit small and really quite grey.

It was as Basil and Sage finally came forward to greet the girls,
That up walked a funny old lady with a head full of curls.
The old lady declared, "It's with young ones that most little girls are smitten.
See, over there, all of those cute little puppies and kittens?"

Opal and Pearl smiled politely and nodded their heads.
Then it was Opal who spoke up and said,
"We do see those little cuties, oh yes.
But, it would seem, so does everyone else.
Past all of their other visitors we can't even get near,
All while no one is looking at these sweet ones over here."

The old lady scratched her chin and said, quite bold,
"But, aren't these two just a bit, well, old?"
It was as the woman spoke that Basil and Sage both stuck out a paw,
Each grabbing a ribbon that in Pearl's hair they excitedly saw.

Pearl laughed, and Opal followed suit.
The old woman huffed and away she did scoot.
The kitties and puppies were of course cuter than cute,
But there was certainly nothing wrong with these playful two! 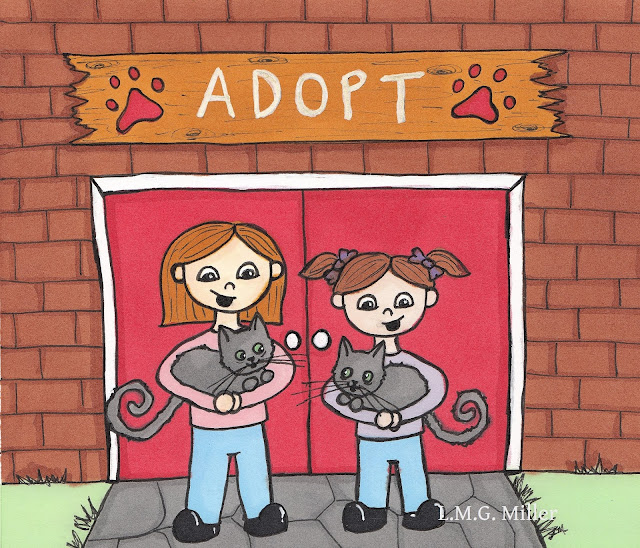 
Thimble is here now to share with you all our gratitude for Brian's Thankful Thursday Blog Hop today. 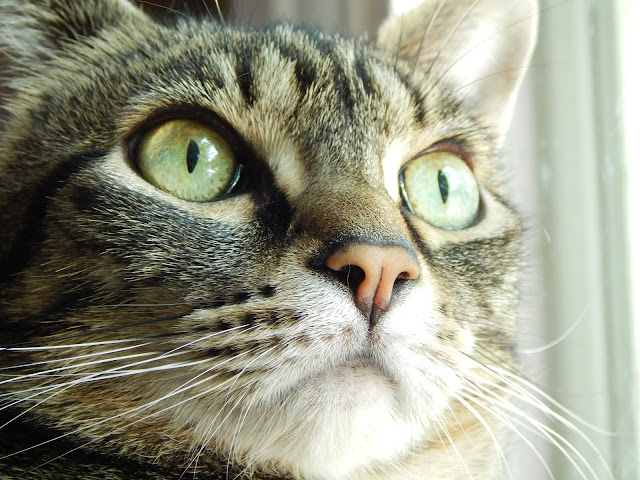 It's probably unsurprising, but Thimble and all of the furbabies here are thankful for their forever home. We purr and pray every day that all homeless animals, and all those who have found their way to a shelter or rescue, will know the comfort of a forever home with a loving forever family.

Today's tip is, of course, to realize the importance of adopting shelter animals, so that they can indeed know the love of a forever home. Even if you are not looking to adopt, you can still spread the word to others about adopting a cat, dog, or other companion animal from a shelter. You can also help by volunteering time and resources to a shelter, as any little bit of assistance can help them adopt out more animals. Lastly, when adopting or spreading the word about animal adoption, please don't forget those animals who are special needs, geriatric, or in any other way often considered less likely to be adopted. Every single cat, dog, and other companion animal deserves the chance to feel comfort and love in a home of their own.
Posted by The Menagerie Mom at 5:25 AM

Oh my, such a wonderful post and the poem is beautiful. Rescue rocks and we always work hard to help those kitties still waiting. Thanks for joining the Thankful Thursday Blog Hop!

What a great poem for Remember Me Thursday. We're purring for all those kitties waiting in shelters to find their furever homes.

I love the poem. How lovely and how fitting.

Opal and Pearl are the names I gave my neighbor's two black cats, since she didn't really have names for them! Thimble is so beautiful; her green eyes, salmon nose, tabby browns, greys and blacks. Adopt Don't Shop!

Your poem is purr-fect for today! We hope the day comes when #RememberMeThursday is not necessary.

That is a beautiful post. I love your poem and drawing. I pray all pets can have forever homes. XO

I love, love, love how you geared your poem towards this special day!

A beautiful poem, and elder pets can be fabulous to adopt. In fact, i remember two grays that were a bit older, named Jake and Elwood. They were adopted together, too, because they truly were The Blues Brothers and you couldn’t tell them apart.

Our shelter seldom has cats that stay so long the shelter ends up being their only forever home. It’s rare, but it has happened, and we give them lots of love and attention.

Within the past year, I have adopted a 12-yr old blind Lhasa Apso & a 10-yr old arthritic black Lab; they get along fine, & I would NOT exchange them for any other dogs. For how many more months or years they have left, I will treasure them deeply..."Buddy" & "Claddagh" are like the air I breathe. I will light a candle tonight for the ones who need homes, & for the ones who have passed on...…..

So creative! We love how you wrote that poem in a RMT theme! There are so many cats who need help, and we are grateful that you are helping them. Hugs!

I LOVE your adopt picture. It made me smile. Remember Me Thursday is an EPIC event!!!

Great post today! So big, so beautiful , so fully packed! RMT (and your sketch), Your poem (which we LOVED) and Thimble (who I think I have a crush on).
We are thankful for you guys!
Purrs
Marv

What a great poem in honor of Remember Me Thursday!! Thank you so much for sharing it and for hopping along with us!