Evan knows how to take it easy, especially on Sundays. He even has the right tools to make it happen. 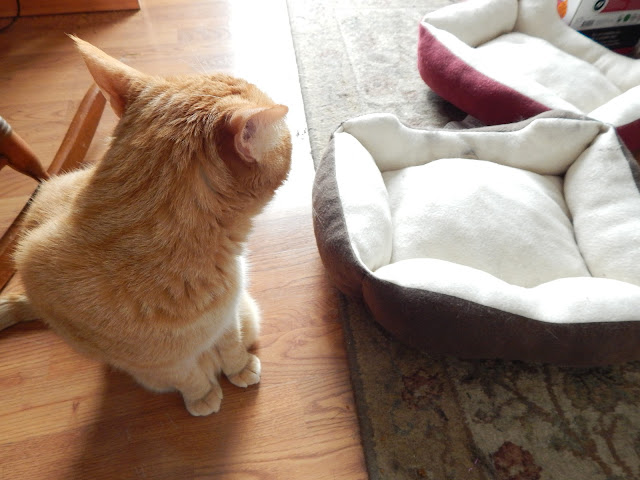 See those beds all tossed around on the floor there? Those are Evan's beds, in large part because he's the only cat in the house who will use kitty beds. Evan loves to take it easy and sleep in them, and to drag them around the room (with a little help from his paralyzed hind legs, but who's judging?). 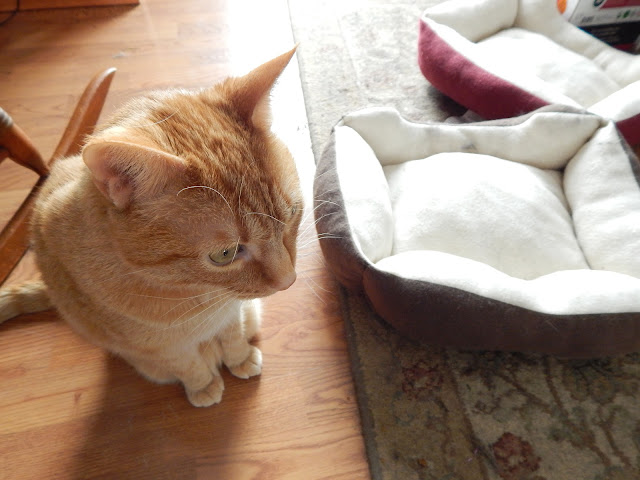 Once he has his beds situated just right, he'll choose one in which to curl up and snooze. 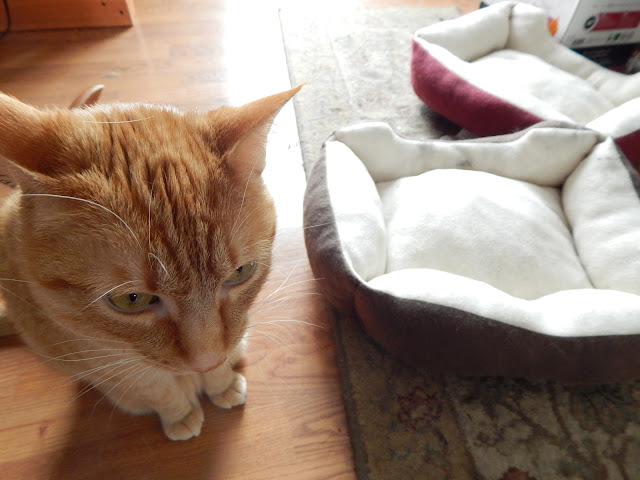 Sadly, though, he's often interrupted. Just like these pre-easy selfies of his were interrupted. 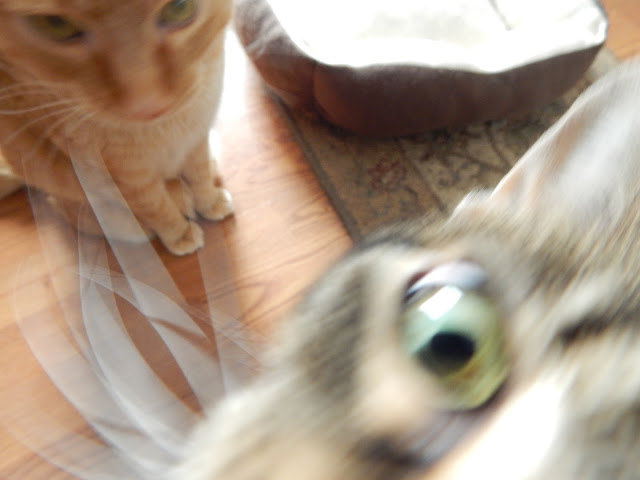 Resident model Thimble says that no one gets their photo taken without her permission. 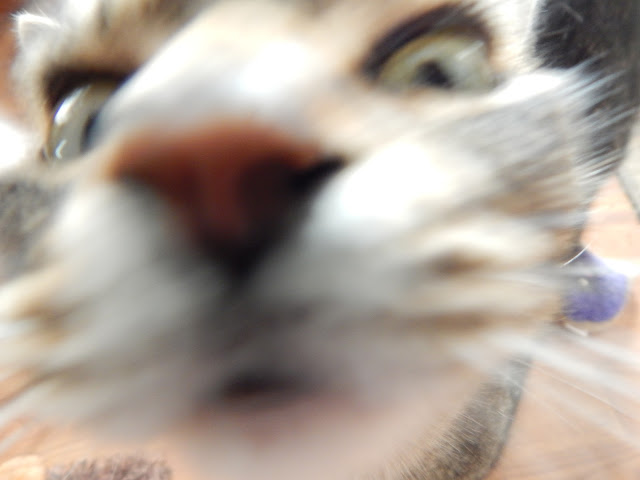 Truly, Thimble usually shows up to any and every photo shoot, no matter who is the intended star of the photo shoot. She says that she's the photogenic one around here, so that camera should be pointed at her. To be honest, the other furbabies around here don't usually mind when Thimble takes that flashy box out of their face. Better her than them. In fact, right after Thimble took over the spotlight in this very photo shoot, Evan happily settled down in one of his kitty beds and napped away.

Are there any other camera hogs out there? Or are most of you like Evan and just want to take your nap in peace?

We hope you all take it easy this Sunday!

I'm thinking today's doodle might require a tad bit of an explanation. I'm pretty sure I've mentioned here before that I am one of those whom you might consider a fan of the Harry Potter series. As a lifelong fan of fantasy, I happily grew up reading the books. Some of my favorite parts of the books were of course the moments with various creatures, both magical and non-magical.

In the world of Harry Potter, each young witch or wizard entering Hogwarts, the castle that serves as a school for witchcraft and wizardry, gets to bring with them their choice of a cat, owl, or toad as a magical pet. It would seem that most students in this whimsical world chose to bring an owl. Now, don't get me wrong, because I think owls are amazing, majestic creatures. Bu, if I had been given the choice to bring a cat to school, you better believe I would have chosen that option before the blink of an eye. I never understood why more cats weren't featured in Harry Potter, and I always wished that more had starred in the books.

So, where am I going with this completely random and rambling rant on Harry Potter and the Curious Case of the Missing Cats? Well, I have decided to scribble up doodles of some of the main characters in Harry Potter, but this time I'm making their magical pets all cats. To begin, Harry Potter himself had a snowy owl named Hedwig. I have actually always been a huge fan of Hedwig, but guess what? Hedwig is now a cat. 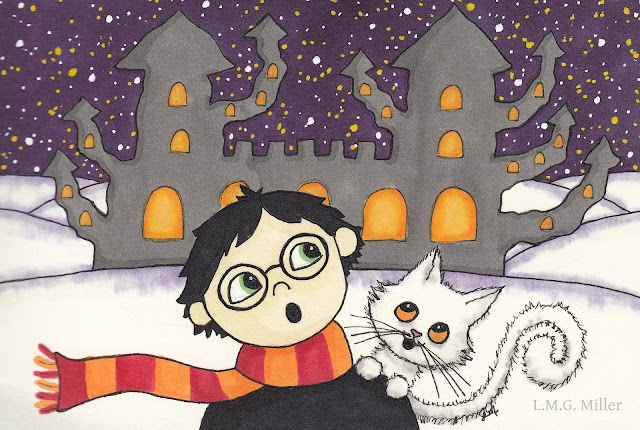 Today, our Spay/Neuter Awareness Month tip is all about behavior. Yesterday we gave some examples of how spaying and neutering can benefit a cat or dog's health, and the same can be said for their behavior. For example, a cat or dog who is not spayed or neutered will often be more inclined to escape outside, such as to run off and find a hot date. Nobody likes the scare of a loose or lost furbaby, and especially not if they come back with news of a surprise pregnancy. So, to reduce any hormonally-induced escapes, of course have your furbabies spayed or neutered. This is not the only behavior affected by hormones and spaying and neutering, though. Cats and dogs who are not spayed or neutered are also often more likely to display aggression, also often due to their hormones. In addition, there is the chance that they will spray or mark their territory, as well as the chance that they will be more vocal and might yowl, such as at windows or doors, especially if they are in estrus and therefore instinctively calling for a mate. These and other potential behavioral concerns can often be reduced or eliminated altogether if a cat or dog is spayed or neutered. So, in case you didn't already have enough good reasons, please spay and neuter your cats and dogs!
Posted by The Menagerie Mom at 5:41 AM

A right cat bed is a special thing. We sure know, as we are always sort of looking for them.

Evan sure has the right idea about beds and positioning, and if he covers the floor with enough of them I'm sure he'll have the perfect spot for every occasion, even the photo bombed ones, too ;)
Purrs
ERin

I love my beds too and that selfie is way too cute!!!

We all have our favorite beds too. Such a great selfie. You all have a wonderful Sunday.

When we want our easy we want no interruptions,xx Speedy

Good for Evan.....he probably asked Thimble to come and interrupt the selfie-taking because he KNEW she'd take over and he could curl up and SLEEP!!!!!!

Evan knows exactly where he wants his beds. Thimble made me laugh.

Sweet handsome Evan, I love that you arrange your beds just so. Thimble, none of our cats like getting pictures taken, you are one of a kind - MOL!

Evan! 2 beds! How do you choose? And I gotta say, Thimble is an excellent photobomber!
Happy Easy and Selfie Sunday to ALL of you!
Purrs
Marv

Mudpie definitely prefers napping in peace. That doesn't get to happen very often though thanks to her camera happy Mommy :) In my defense, I have to preserve all that cute!

Evan is a cutie and photobomber Thimble is too :) Joanie actually enjoys the camera and modeling. I like the drawing. Excellent tips too.

Well, as much as we all love Thimble, i am glad you got a couple of pics of Evan before she took over! None of mine care either way about photos.

Evan, how awesome that you have your beds set up just the way you like them. :)

Poor Evan :-) You are a sweetheart.

Have a good week,

How nice that you have your choice of cat beds, Evan. And that no other cat hogs them like they hog the camera. :)