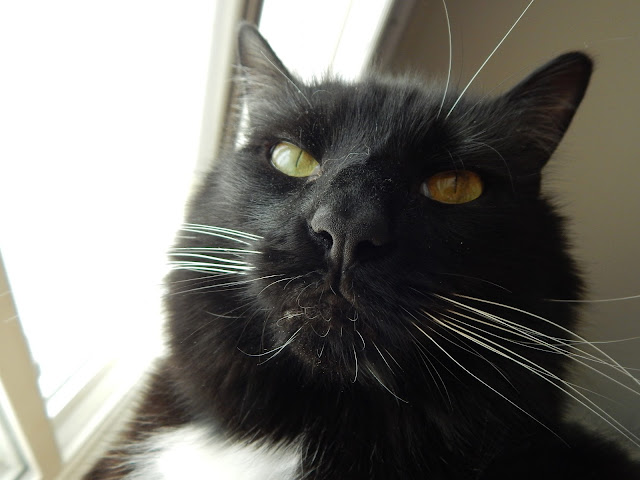 See? Isn't Toby the ultimate Mr. Cool. The problem, though, is that being Mr. Cool is quite tiring. 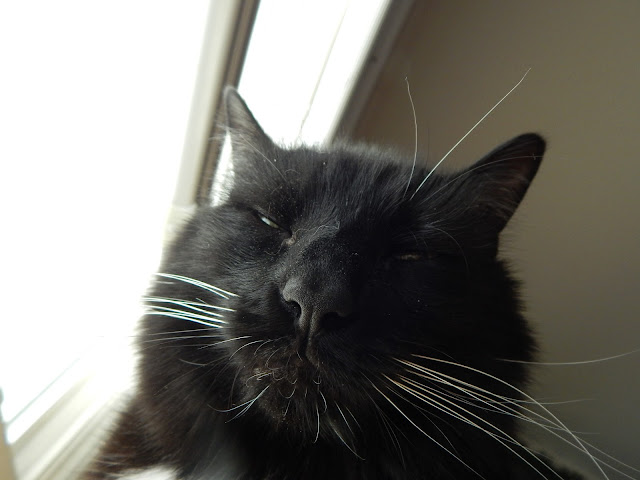 It's so tiring, that sometimes Mr. Cool falls asleep on the job, right in the middle of a photo shoot. Being awesome is exhausting, after all. 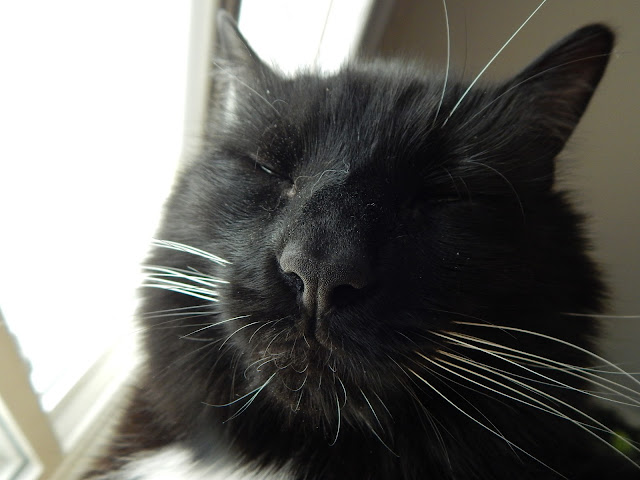 Mr. Cool and all of us here wish you a magnificent Monday! Make sure you get in those naps!

I mentioned yesterday that I'm currently doing a perhaps weird series of doodles that relates to something known as Harry Potter. This fantasy series of books, which I've enjoyed since my childhood, features a great many animals and creatures. If you ask me, though, this series stars far too few cats. I've always been of this opinion. So, I'm scribbling up some doodles in which I'm giving certain main characters from Harry Potter their very own cats. Today I'm doing this for the character known as Ron, who in the first couple books has a rat named Scabbers. Of course, in my doodle, Scabbers is no longer a rat. 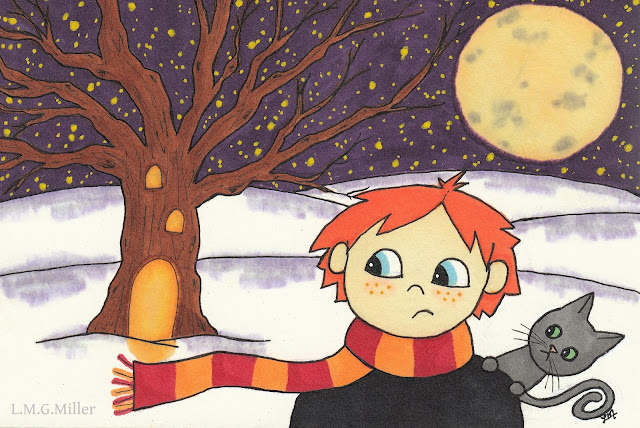 In case you were wondering about the setting of my doodle, the character of Ron had more than one unfortunate run-in with a tree throughout the series of books. Scabbers didn't have a whole lot of luck when it came to trees, either, for that matter. Hence the tree.

For today's Spay/Neuter Awareness Month tip, we're discussing how it is important to be aware of your cat or dog's age and size, and to have them spayed or neutered at an appropriate, safe, effective time of their kittenhood or puppyhood. This is important, for one, because cats can potentially become pregnant as early as 4 or so months of age. Dogs fall not far behind that, with the potential for becoming pregnant at 5 or so months old. Should your kitten or puppy get loose, this means they could come back pregnant even at such a young age.

In addition, spaying or neutering your furbaby before they go through their first estrus or pregnancy will give them the best chance of remaining free from related health issues later in life, such as mammary cancer. Spaying or neutering before their first cycle can also help to potentially reduce the display of certain behaviors, such as spraying. Though certain such health or behavioral issues can still arise even if a furbaby is spayed or neutered, having this surgery performed before their first cycle can reduce the risk.

So, then, when should you have your cat or dog spayed or neutered? The short answer is to discuss this with your veterinarian. Ultimately, it depends on the individual animal's overall health and development. For typical, healthy kittens and puppies, the AVMA has endorsed spaying and neutering as early as two month of age, and/or when the kitten or puppy has reached two pounds. Many shelters and rescues follow this practice. Some veterinarians will prefer to wait a little longer, such as when the kitten or puppy has reached three, four, or even five months of age. Essentially, a veterinarian will best be able to determine when is the best time for your furbaby to be safely and effectively spayed or neutered, so of course discuss this with a professional.
Posted by The Menagerie Mom at 4:54 AM

I can totally understand being tired and falling asleep on the job!

Look at those white whiskers on his chinny chin chin! LOVE THEM!

Toby, you are so cool and laid back, you don't even have to stay awake for a photo shoot - MOL!

Toby is such a handsome boy. I am enjoying your drawings and agree Harry Potter does need more cats. I have only seen the first movie, someday, when my great-niece gets into it, I will read the books and watch the movies. I don't know why I didn't get into it more when my niece was reading them. Excellent tips too. I always worry about my cats because so many were not spayed until I got them and as you know, KaTwo has mammary cancer because of this. :(

Toby, you are too cool for school!

With regards to your comment about no longer watching NASCAR after Dale died, would you believe that's when I started??? I tuned in the following week just to see the tributes because I knew how huge he was, and that was the week Kevin Harvick replaced him. I became hooked quite quickly, and when Kevin won 3 weeks later he became "my" driver and has been ever since!

“Don’t hate me because I’m such an awesome mancat!”

Nice doodle, and we spay/neuter the cats when they weigh a minimum of 2 pounds, maybe a bit more if they were runts of the litter. It’s always best early, but not too early.