We're here to do our usual Thursday thing. That means we'll start by sharing a bit of a rhyme.

Each week, we participate in Angel Sammy and Teddy's Thoroughly Poetic Thursday challenge. And, each week, our hosts provide us with a photo prompt to guide us. This week's prompt is this image here:

I really took some liberties with this one. I saw that image, and the first thing that came to my mind was the inspirational phrase, "Take the leap." I don't fully know how that phrase then led my fingers to type out the random poem below, but it did.

Ruby Blue was a quaint little girl,
Making friends with every beetle, bunny, and squirrel.
Her habits often made her the brunt of jokes,
But those jokes never even once got her goat.

On one fine, bright, and sunny day,
Ruby Blue, just as usual, went out to play.
She was accompanied by her pup of a pal named Griffin,
As well as her furry feline who answered to only Pippin.

As Ruby Blue frolicked amongst the forest trees,
She stopped in her tracks when she saw Griffin himself freeze.
His ears perked up and his nose lifted in the air,
And then headlong into the bushes he did run and tear.

"Griffin, what on earth are you doing?" Ruby Blue asked,
As she climbed into the bushes, which happened to have thorns like tacks.
Pippin also trotted over to have a look,
But he stayed way back, so that on his fur no thorns would hook.

"What is it?" Ruby Blue asked a persistent Griffin.
The dog was sniffing, sniffing, and then again sniffing.
Stepping closer, and getting to know a few more thorns,
Ruby Blue saw a bluebird resting on the forest floor.

The girl gently picked the bird up in her palm,
And it let out a shrill chirp that was far from calm.
"Oh, no." These sad words were by Ruby Blue spoken.
"You must have fallen, because your poor little wing is broken."

Pippin himself let out a chirp much like a bird.
"Now, now," Ruby Blue told him, "don't you utter a single hungry word.
This feathered fellow is our friend,
And to no one's plate will he be sent."

Ruby Blue then told Griffin and Pippin to come along,
And they followed her as she hummed a little song.
Through the forest they walked and skipped,
Until they reached the little town of Plum Pick.

Straight to the office of Doc Tock, that's where Ruby Blue headed.
But, they were first stopped by bully Billy and his buds, as expected.
"What have you there?" Billy the bothersome boy pestered.
"I have a new friend, if you must know," Ruby Blue answered.

Looking down at what Ruby Blue safely cradled in her hand,
Billy the bully scoffed and laughed where he did stand.
His buddies didn't seem to understand why their friend laughed,
But they nonetheless and obediently giggled and spat.

Billy asked, "Why even worry about a bird with a broken wing?
After all, don't you already have enough broken things?"
Billy pointed to Griffin and Pippin and continued his speech.
"Your dog doesn't even have eyes with which to see,
And your cat has but three measly feet."

Ruby Blue shrugged and said, "I guess you just wouldn't understand.
There is more than just a broken wing to this bird in my hand.
For the so-called broken, I will take the leap,
Even if that makes me some sort of black sheep."

As she walked around Billy, Ruby Blue continued her reply.
"Just so you known, Griffin can see, just not with his eyes.
And as for Pippin, he can run faster than any of you guys."
She had but one last thing to tell the bully boys before her goodbye.
She said, "I believe this little bird still has places to fly."

At their destination, Doc Tock examined the bird and set its broken wing.
He said, "With a little TLC, he'll be good as new by the end of this spring."
And so Ruby Blue took the bluebird home and gave him lots of rest and snacks.
She learned that his favorite treat of all was none other than gnats.

By the time the end of spring had arrived,
Ruby Blue had named her bird friend Clive.
When Doc Tock saw the bluebird one last time,
He told Ruby Blue that Clive was very likely ready to fly.

With that, out set Ruby Blue, Griffin, Pippin, and Clive.
They walked through the forest, where the flowers and trees were well and alive.
When they reached a bright and green area of that tree-filled land,
Ruby Blue held Clive in the palm of her hand.

She gave the bird a smile as she sat him down on a low branch,
And he shook out his feathers and moved his little feet in a dance.
"Go ahead, test out those wings," Ruby Blue did excitedly say.
Clive whistled his own happy hooray.

The bluebird spread his wings and gave out a chirp,
But then he froze in place up there on his perch.
He gazed to the ground below,
And then lowered his wings so that beneath them no wind would flow.


"Don't be afraid," Ruby Blue told the bird. "Take the leap!"
At first, not a single sound came out of Clive's beak.
"I might fall," he then seemed to tweet in a sad little cry.
Ruby Blue smiled and said, "I like to think you will fly."

At first Clive merely cocked his head at the thought,
But then he decided that, when it came to being afraid, he would not.
He stood tall, spread his wings, and took the leap.
It was as he skillfully soared through the air that he did sing and tweet.

Of course, Clive flew in to visit Ruby Blue each and every day.
With Pippin and Griffin, he would often have fun and play.
Clive's flights took him here, there, and everywhere,
But he never forgot those who showed him great care. 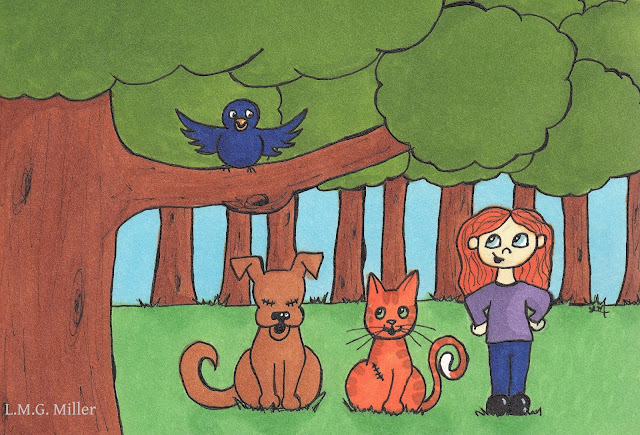 
As with every Thursday, it's now time for Thimble and her thankfuls. To be honest, Thimble and I are both thankful for the same thing this week. And that is, this face! 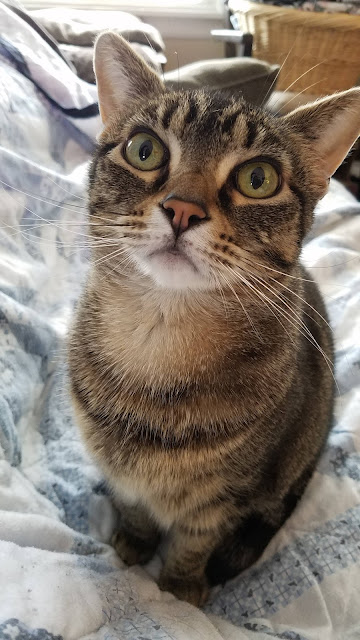 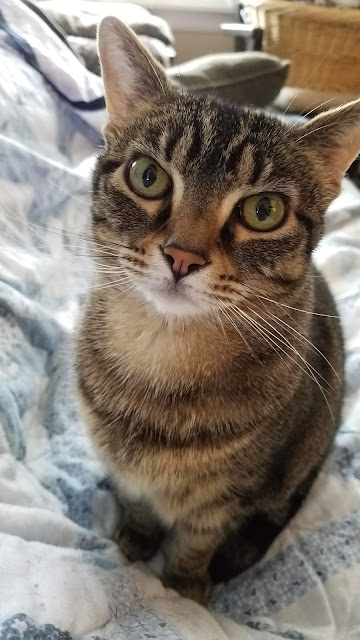 Does this face make your heart melt or what? It sure leads to some melting of the heart of this mom of Thimble's. Perhaps this is a bit of an unorthodox thankful for Brian's Thankful Thursday Blog Hop? Either way, excuse while I sit here and stare all starry-eyed at this adorable face..

Of course, though I really am thankful for my girl Thimble and her sweet little face, we are indeed thankful for a great deal more. We are thankful for our warm home and meals, and for our family and friends. This means we are of course, undoubtedly, thankful for all of you and the friendship with which you gift us.


Last but not least, we are here to help you prep for tomorrow's Friendly Fill-Ins challenge. Below are the statements for you to fill in, if you would like to join in on the fun. Ellen of 15andmeowing came up with the first two, and I came up with the second two.

As part of our series of tips for National Pet Dental Health Month, today we'll be discussing some of the symptoms to look out for related to dental disease. First up, of course, is halitosis, or bad breath. This can signify any number of issues, including an infected tooth or gum disease. Of course, bad breath can also come with certain diseases, such as oral cancer or even kidney disease. For these reasons and more, never ignore abnormally rank breath in your cat or dog. Moving on from bad breath, though, if your kitty or pup is suffering from certain dental issues, they may also of course have a decreased appetite, or seem pained or have difficulties when eating. In some dental cases, you also might notice blood or excess drool coming from their mouth. There is also the chance you might visibly notice broken teeth, loose teeth, discolored teeth, or even tartar buildup. Also don't forget that the teeth are in close proximity to and therefore often linked to the eyes and nasal cavity, and so discharge from either of these can also potentially signify an oral concern. All in all, if you smell, see, or in any way notice concerns relating to your furbaby's mouth, or any part of their body, do be sure to have them examined by a veterinarian. Dental health can even be linked to heart health and other systems of the body, so this is again one of those cases in which it is always better to be safe than sorry.
Posted by The Menagerie Mom at 5:22 AM

Oh Thimble, that face is so cute!

You have a wonderful talent to take a photo and your imagination creates such a lovely poem.

We love that sweet face too, you are such a sweetie dear Thimble! Oh my, that leap makes my paws hurt, yikes! Thanks for joining the Thankful Thursday Blog Hop!

Your poems/stories have the ability to whisk me away to Plum Pick! So delightful! Thimble's sweet face would have my kisses on it ALL OF THE TIME!

That’s a precious poem, i can imagine Clive taking flight the first time is a lot like a leap of faith.

That face could make anyone melt! And these poems of yours simply must make their way into a book!

I love the poem and drawing with it. I am always so amazed at what you come up with each week. Thimble is adorable. Great tips too. I know that breath smell of cats with kidney disease too well. I look forward to your fill-in answers.

Dat face are definitely something to be thankful for!

Love the poem you came up with this week - that's a story of a REAL "leap of faith"...! Love the doodle as well but then we always love them AND any time we get to see some Thimble - we're happy!!

We love Thimble's sweet face too and are very glad we get to see it on your blog.