We have so many fun things to get through today. To begin, we'll go ahead and share our daily contribution to the annual April A to Z Challenge.

As we've said before, our contributions to the A to Z Challenge this time around are a series of doodles starring my angel Rosie. In this series of doodles, Rosie will be going throughout a more or less routine sort of day, doing this and that, A to Z style. So, what's Rosie doing with the letter D? 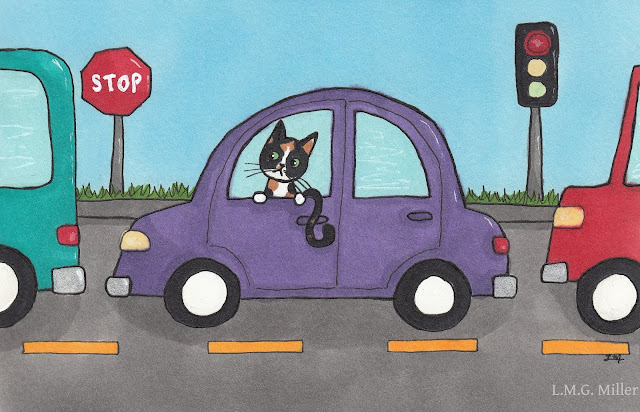 Throughout this A to Z Challenge, we're also going to do our best to share furbaby photos that in some way correlate with angel Rosie's daily alphabetical adventures. We may have to make some stretches and take some liberties, and many of these will be flashback photos that fit in with that day's theme. To go along with today's A to Z topic of Driving to Work, Evan is here to offer you a ride in his Kitty Cab. 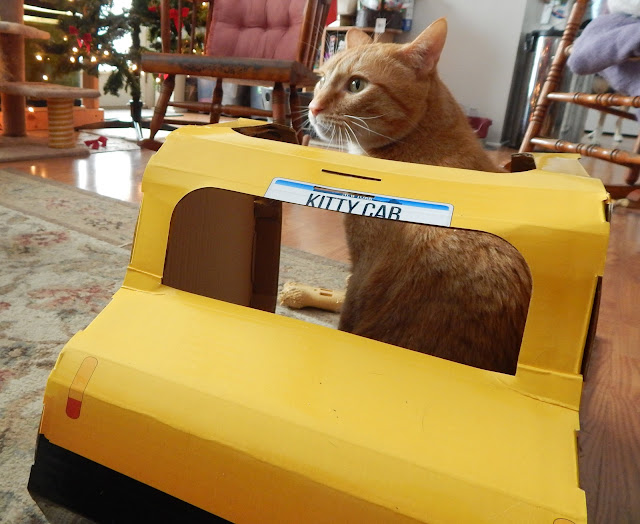 Evan got that Kitty Cab two Christmases ago (hence the out-of-season Christmas tree you might notice in the image above). These days, that Kitty Cab is no longer in one piece. It had a good life, though, while it lasted.


What's up next on the docket? Angel Sammy's Thoroughly Poetic Thursday Challenge, of course!

Our poetic host are always very helpful, and they give us a photo prompt to guide our rhymes. This week's image is this intriguing one here:

Someone doesn't look too happy in that photo, do they? Truth be told, seeing this image made me realize that some of my recent poems have not shown their male human characters much luck or kindness. I don't know why this tense image is the one that spurred me to remedy that, but it did. I don't mean any ill will to the men out there, and I tried to show that with the poem below. I really don't know what sort of success I achieved, but here's the poem for you to judge. Oh, and I tried to stick with the the whole letter D thing with the title and some of the characters.

Liz had a date,
And he would be over for dinner at eight.
Her date was a man named Dirk,
And she had met him while at work.

Dirk arrived right on the dot.
He was never late for work either, no he was not.
"We're having spaghetti for dinner," Liz said when he arrived.
"I hope that's a meal you don't terribly despise."

Dirk quite fancied a plate of spaghetti.
He told Liz as much, with a smile quite happy.
"Please, take a seat," Liz told her date.
"There will soon be spaghetti to fill your plate."

Liz then disappeared into the kitchen,
But she was gone for only a very short second.
"I almost forgot!" she shouted when she reappeared.
"I admit, this might sound a tad bit weird."

When Liz did not continue, Dirk did say,
"Go ahead. There isn't much that surprises me these days."
Liz said, "I want you to meet my boss."
Dirk nodded, but said, "My understanding is, admittedly, at a loss.
We work together, do we not?
Ms. Sprig is both yours and my boss."

Liz shook her head and replied, "Oh, no, not her.
I have two bosses who quite differ.
My true boss is Mr. Darcy,
Who, unlike Ms. Sprig, is the life of the party."

Dirk said, "What job is this Mr. Darcy the boss of?
My interest is thoroughly piqued, if I'm being upfront."
Liz called out, "Mr. Darcy! Come here!"
To Dirk, she then said, "He looks a bit rough, but have no fear.
Mr. Darcy lived a life on the streets.
That is, before he and I did meet."

Dirk could not help but cringe.
Was this date going to leave him unhinged?
Dirk thought he had perhaps gotten in over his head.
After a painfully long wait, Liz clapped her hands and said,
"Here Mr. Darcy comes!
Mr. Darcy, you need to meet someone."

The Mr. Darcy to whom Liz spoke was not what Dirk expected.
Dirk no longer felt even an ounce of crippling fear or dread.
Yes, Mr. Darcy's face was scarred and his ears a bit frayed.
He was also whiskered and fuzzy and a bright orange shade.

"Ha!" Dirk could not help but say with a clap.
"Your boss Mr. Darcy is a big ol' cat!"
At the sound of his name, Mr. Darcy headed over to Dirk.
The big cat strutted over as his tail did perk.

Dirk reached down to give Mr. Darcy a pet,
But the cat dodged his hand and waltzed to Dirk's feet instead.
As soon as he arrived at his destination,
Mr. Darcy rubbed the man's legs and in a circle he spun.
Then, just like that, the cat upchucked a hairball right on Dirk's shoe.
Without hesitation, Dirk grabbed a napkin and wiped up the slimy goo.

Liz apologized and picked Mr. Darcy up in her arms.
Dirk waved a hand and said, "Oh, he meant no harm.
It was just a hairball, and a bit of food,
Which, for the record, was only half chewed."

At that, Liz smiled.
Her joy seemed more than just mild.
She asked, "Cat puke is something you don't mind?
Do you happen to be a cat guy?"
Dirk shrugged and said, "I guess I am, since my own cats number five."

Thimble informed me that she would be quite unhappy if I did not share a photo of her, as Thursdays are Thimble Thursday, among other things. So, you all get a blooper sort of shot starring Thimble and the same Kitty Cab Evan shared earlier in this post. 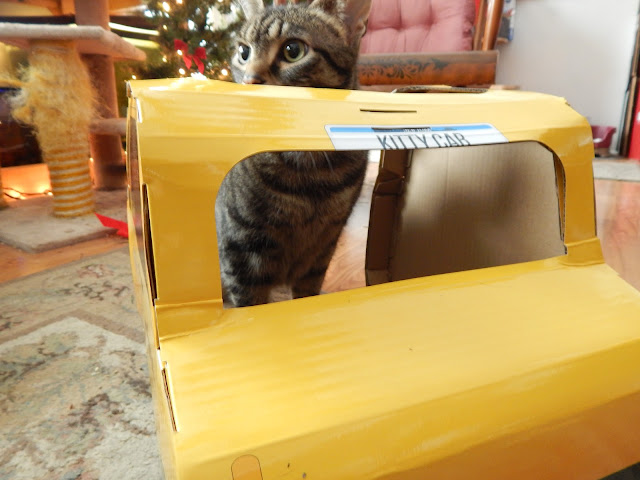 Thimble was just as happy with and thankful for this cardboard taxi as Evan was. She especially liked when it ultimately collapsed after plenty of use and abuse, as that allowed her to sit on the cardboard and claim it like the queen of the hill that she is. If busted up taxi cabs and cardboard aren't fantastic things for which to be thankful, Thimble doesn't know what is.

Of course, as always, we also want to express our gratitude for all of you in this wonderful blogging community!

Last but not least, we have for you the fill-ins statements for tomorrow's Friendly Fill-Ins challenge. Ellen of 15andmeowing crafted up the first two, and I came up with the second two.

Today's tip is about car safety when it comes to your furbaby. There are a number of factors to keeping a cat or dog safe in a car, and we're thinking you all know most or all of them. First and foremost, we'll get the obvious out of the way and remind you to never leave a cat or dog unattended in a car in the heat of summer or in the cold of winter. In both cases, extreme temperatures can render a car a dangerous place for a kitty or pup to be. Hyperthermia and hypothermia are both potentially fatal, and can happen quickly, so do not take the risk.

In addition to the above driving tip, also ensure that any pup or kitty traveling in a car is traveling securely and safely. Cats and small dogs are safest in carriers, and those carriers are most safe in the car when belted in. When it comes to large dogs, consider looking into seat belts specifically designed to keep dogs as safe as possible. There are belts that securely harness a dog in, for example. Whether it be for a trip to the vet or a road trip, determine and find the best way to ensure that your furbaby is safe and secure in their seat. This may require some research on various products on the market, but in the event of an accident, being safely and securely situated in the car could save your furbaby's life.
Posted by The Menagerie Mom at 1:36 AM

Cool ride you two and a very cool poems too. Thanks for joining the Thankful Thursday Blog Hop!

We love that kitty car...too bad it's not driveable anymore.

We like the kitty cab. We need one of those.The poems are terrific too. We liked those a lot. Have a super day.

Love your drawing for "D", and the kitty in the kitty cab.

Great driving photo's! Driving to work is a bummer, but I get most of my 'reading' done on my drive - that's by audio book, not actually reading while driving - MOL!

I fell in love with a catman, but we didn't know it until years and years later! The Hubby so loves Da Boyz, and he is extra gentle and sweet to old-ladycat Angel. He pets The PO'M, and Sweetie, when she allows it. As I am away from home every day, it's good that he's a catman!

Love those photos with the car, too cute!

Uh oh...did Evan have a crash? Are you a good driver, Rosie? Too cute!

Cute drawing of Angel Rosie. I LOVE your poem! That guy is a keeper. :)
Evan could have entered the Cat Scouts cardwood derby with that cool car.
Excellent tips too. I look forward to your fill-ins answers.

Driving would be so much more fun if there were about 1/2 as many cars on the road.

Great shots of Evan and Thimble in the taxi — it was loved to death, i would say.

Love the poem this week.....complete with a Cat Man! Well done.....and the Kitty Cab was quite a fun toy in it's day wasn't it. Even after it had collapsed from exhaustion (!) it was still comfy to sit on. Love that!