We have a few bits and bobs to get through today, and we'll start with the A to Z Challenge

We are still going with our series of doodles starring my angel Rosie. In this series of doodles, Rosie is going throughout a more or less routine sort of day, doing this and that, A to Z style. So, what's Rosie doing with the letter J?

J is for...Journaling Your Thoughts 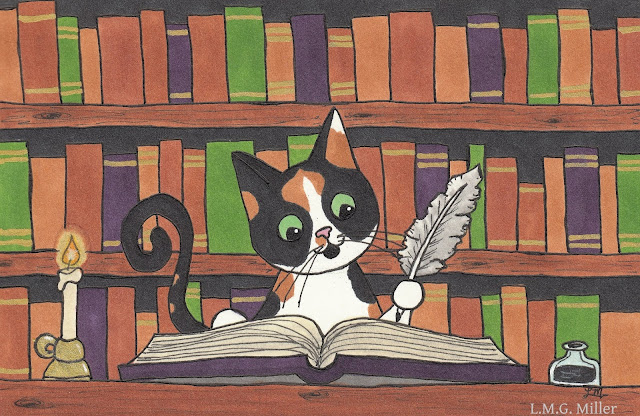 Throughout this A to Z Challenge, we're also doing our best to share furbaby photos that in some way correlate with angel Rosie's daily alphabetical adventures. We may have to make some stretches and take some liberties, and many of these will be flashback photos that fit in with a particular day's theme. Today, Thimble wants to show you all how her mom here journals her thoughts in the form of messy and chaotic arts and crafts. She wants you to see the nightmarish scene. 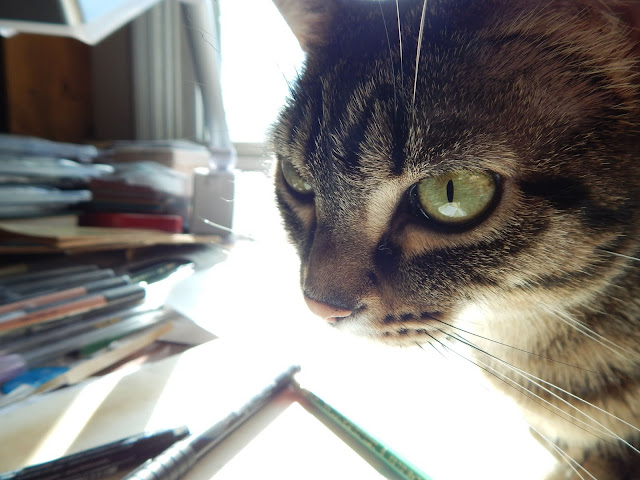 Do you see the state of that poor table back there? It's a disaster area.

That being said, this is Thankful Thursday, and Thimble can't deny that there is one thing about her mom's arts and crafts that she loves. And what's that? The pens and pencils. They're just so fun to slap around! 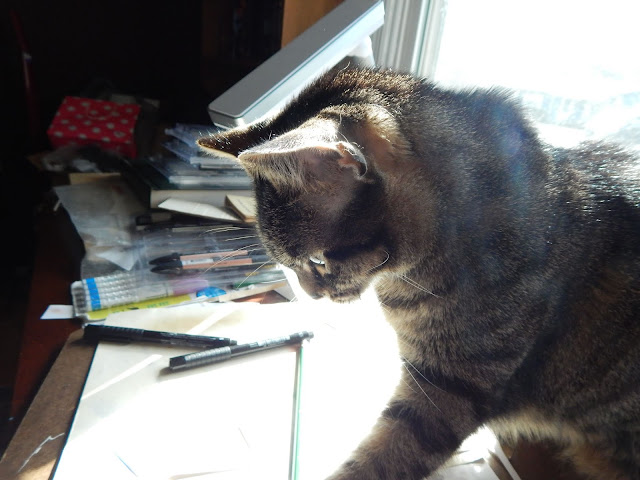 Thimble may be grateful for her mom's pens and pencils and whappy paws, but we're all more so thankful for this wonderful blogging community. You all make such wonderful friends.

And now, of course, we're moving on to the Thoroughly Poetic Thursday challenge, hosted by Angel Sammy. 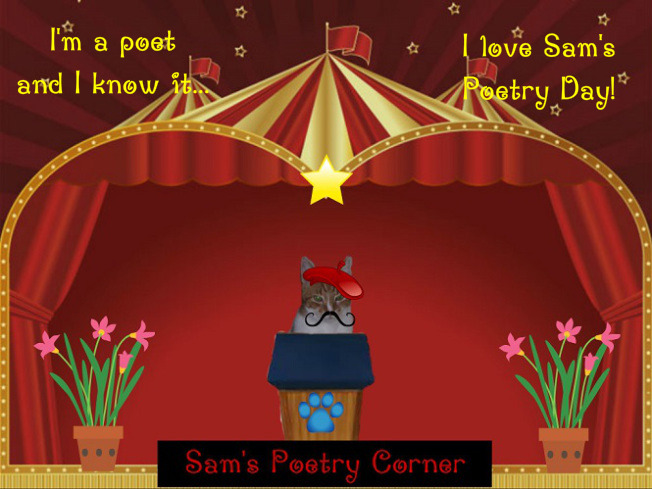 Every week, our hosts share a photo prompt to guide us as we get poetic. The image they shared for this week is this cute one here: 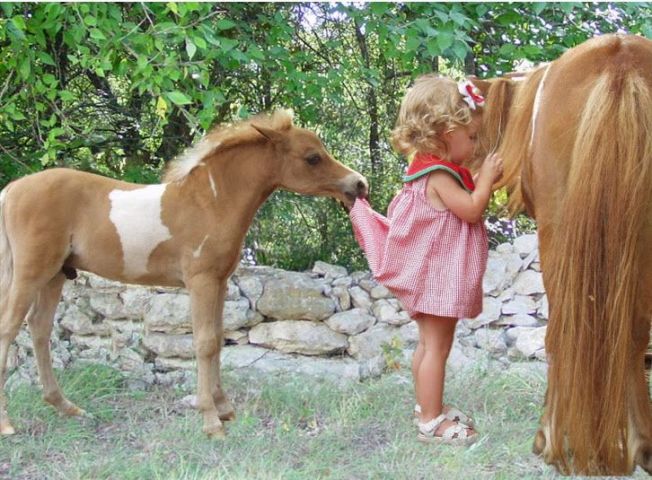 I had an idea for a poem the second I saw that there image. I even went with that idea when writing the poem. But, truth be told, I think I sort of lost control of the poem somewhere along the way, and it ended up far more boring yet also bizarre than I intended. That being said, if you're interested in a poem that is weird and far longer than it has a right to be, feel free to read on.

In a Field of Horses

The Harris family lived on a farm.
The youngest, Liza, preferred to pass her time in the barn.
After all, that's where lived the horses she called her friends,
Who went by the names of Elle and Ed.

Liza also considered herself friends with the resident tabby cat,
Even if he always rejected her offer of hugs or to sit on her lap.
This big brown cat went by the name of Gerard,
And he watched over every square inch of the family farm.

Gerard moseyed into the barn one fine day,
While Liza talked to the horses as they munched on their hay.
The cat strutted over and jumped on the edge of a stall,
Before licking clean all four of his paws.

"Hello, Gerard!" Liza said with a smile.
The cat glanced over and grunted, continuing his bath all the while.
When his preening was complete and he was spic and span,
Gerard jumped down to the ground and by the horses did stand.

The cat sighed as he looked from Elle to Ed,
And then he rolled his eyes and shook his head.
"You two belong in the pigsty," Gerard said.
"Then again, your manners would make even the pigs drop dead.
Why can't you eat like the horse next door?
She would never leave even a crumb on the floor."

"There's a horse next door?" Liza asked.
Elle neighed, "I certainly didn't know that."
"We've never seen this horse while out in the pasture," Ed said.
Gerard shrugged. "She's just over on the neighboring homestead."

Liza tilted her head to the right,
As she thought about the neighboring pasture on the hillside.
She finally asked, "What does this horse look like, Gerard?
I'm not recalling seeing her, even when I think real hard."

Gerard nodded towards Elle and Ed,
Before he yawned and said,
"She looks a lot like these guys.
Well, except for the horn growing between her two eyes."

Liza's eyes grew wide and her jaw dropped.
In their stalls, Elle and Ed clomped and stomped.
"The horse next door has a horn?" Liza asked.
Out of her mouth there came a loud gasp.

Gerard nodded his head.
"Yes, that's what I said.
It's really just like any old horn.
It looks pointy and could probably leave your finest shirt torn."

Liza, Elle, and Ed started talking all at the same time.
Gerard put up a paw and up to the rafters he did climb.
"All your jabbering gives me a headache," he groaned.
"Would you stop bothering me if this other horse you were shown?"

"Yes!" was the answer Gerard did receive,
And so through the barn doors all four of them did leave.
They walked through the grassy green pasture.
Towards the land next door they were moving faster and faster.

As they approached the wooden perimeter gate,
Gerard pointed a paw and did state,
"See? She's right over there.
Good grief, don't be so rude as to stare."

"Would you look at that!" Liza declared.
Indeed, she could not help but stare.
The horse next door was exactly as Gerard had described,
Right down to the horn between her two eyes.

Still staring, Liza said, "That's a unicorn!"
The unicorn of a horse next door lifted her head with its horn.
"Oh, hello!" she shouted from across the pasture.
"I didn't see you there, or I would have greeted you faster."

When the unicorn made her way to the gate,
She said. "It's nice to meet you. My name is Kate."
Liza blurted out, "Did you come from some place grand?
Like some wonderful, fantastical, magical land?"

The horse let out a neighing laugh.
She said, "Oh, no, nothing like that.
This horn here, it just grew in one day while I was out for a walk,
After I had with myself a nice little pep talk."

Kate the unicorn continued on with her tale:
"That was back when I lived in a field with all sorts of horses and hay bales.
I have to admit that horses sure are fine, majestic creatures,
But I didn't want to be like everyone else, with all the same features.
So, I looked around and thought,
'How can I can be more unique and whatnot?'
Then it hit me, in a field of horses, why not be a unicorn?
And then, poof, I had a horn!"

Liza said, "How have we never met you before?
After all, you live just next door."
"Oh," Kate said, "that's because I'm new here.
This horn here, it can be a thing of fear.
It proved quite dangerous living with my friends with this horn on my head.
I kept forgetting I had it, and didn't want any of them to end up dead!

Kate then whinnied, "So, now I live with this nice old couple here.
To be honest, I don't think they can really quite see or hear.
I could have three horns on my head,
And they'd probably think they were just ears instead.
But, really, that's all no matter to me.
Being a unicorn makes me feel so unique and free!"

Kate then yawned, stretched, and said,
"I'm going to go rest my sleepy, horned head.
I hope to see you all soon," she decreed.

"Don't worry, though, I won't let my horn make any of you bleed!"


And now, last but not least, we have for you all the fill-in statements for tomorrow's Friendly Fill-Ins challenge. Ellen of 15andmeowing came up with the first two, and I came up with the second two.

If you have hobbies that include journaling, writing in general, scrapbooking, or anything that includes arts and crafts, always keep your furbaby's safety in mind when it comes to how you store or display your supplies. Items such as pencils, pens, marker, scissors, tape, stickers, glue, paperclips, and anything and everything in between can pose a variety of risks to a curious cat or dog. Sharp objects such as scissors, pencils, and pens pose obvious risks of injury. Items that are small, again such as pencils and pens, and also paperclips and the like, can be choking hazards, or can cause intestinal blockages or perforation of the bowels if ingested. The long and short of it is that some of our human hobbies can include items that are best left out of the reach of our kitties and pups. Especially if your cat or dog is curious and known to get into things, and if they are not being monitored, then it is likely best to hide away any items that might tempt them. So, put those pencils, pens, and other such items tucked safely away in a drawer or another secure location.
Posted by The Menagerie Mom at 5:31 AM

Gramma does a lot of sewing and her kitty always likes to be in the middle of it helping out. One has to be careful with pins and scissors.

Rosie is such a cutie and so are you sweet Thimble! Love the poem. When I first saw that picture I knew you'd have a great one for it. Thanks for joining the Thankful Thursday Blog Hop!

Da Boyz love to bat around my pens, or they simply sit on top of the newspaper where I am working a crossword or sudoku puzzle. We enjoy your story poems; take us to wherever you want to go!

Beautiful Thimble, a clean well ordered desk is the sign of a sick mind - MOL!

Very cute drawing. And Thimble is a cutie too. I am sure she is helping you clean your desk :) Your poems always amaze me. I can barely come up with a few lines and you have enough for a book,good job! Great tips too. I do all my art projects in the dining room which is the only no kitty zone.

That table is full of “fun” toys!

Rosie, we think you should publish your journal in "meowmoir" form! Hint, hint...

Journaling is a great idea, when i can find the time. Meanwhile, i do post online.

It would be very nice to have a unicorn next door, at least, i think it would.

I like to whap around da pencils some too.

Oh I don't think this is bizarre - it's fabulous. What a tale....isn't it wonderful how our imaginations work when just looking at a photo? You are PROOF of that!

We love your doodle. Thimble we like slapping pens around too.

Angel Rosies Journal is just grand as it that poem of horses who stand. That a cat could show them a thing, made us smile as much as its spring
Timmy and Family

Journalling is great, and even we can't eat all of mum's pencils!!!