I'm supposed to be sharing my weekly poem and its illustration today. Both the poem and its doodle have only a couple of small details left to be completed, which I meant to and could have easily finished yesterday. But, I didn't get around to it yesterday because I was too busy fretting over a non-emergency yet still very distracting medical issue that my orange boy Evan is having.

For those who don't know or might not remember, Evan is hind limb paralyzed. That's how he's been for almost his entire 7 years of life. For over a year now, Evan has also had urinary incontinence, very likely related to his hind limb paralysis. For some reason, Evan's incontinence is worse in the cold months, and for the past couple weeks he at the very least leaks urine almost every single time he sleeps. I give him regular baths with a spray shampoo for pets, but he's not terribly tolerant of them, and so his cleanings are often not as thorough as they should be or that I wish I could manage. Evan also simply does not like having his back legs, or other areas back there, messed with very much.

Back to the issue at hand, though. Over the past couple of days, Evan has been obsessively licking the area near his urethra. I also started noticing an odor when Evan licks back there. Evan finally let me get a good look of the area yesterday, and that's when I discovered that the area around his urethra looks incredibly unhealthy right now. Since Evan takes a bit of manhandling to thoroughly handle and bathe, my mom and sister were helping me hold him while I got a good look of the area. While they were both there holding him for me, I tried my best to give him a more thorough yet gentle cleaning in that area, but I'll be the first to admit that the cleaning I gave him most definitely did not fix the issue. My guess is that Evan's constant urine leakage and now constant licking of the area has led to far too moisture and irritation in that area. It looks very raw, very wrong, and very likely infected.

So, I called the vet the second I discovered the issue, and though they were not able to see us yesterday, I am taking Evan to the vet this morning. I am hoping and am telling myself they'll be able to fix him up with a thorough cleaning, some antibiotics, and hopefully some sort of cleaning agent that I can safely use at home to keep him clean yet also dry back there. I hope it's as simple as that and that nothing more malignant is going on. Evan is otherwise acting like his normal, cuddly, ornery, hungry self, so I hope we can get this all under control and put it behind us.

Evan's veterinarian and I have had many discussions regarding his incontinence, and we both have thus far decided against medications that are meant to control or prevent incontinence. This is because when cats take those medications, they are far more likely to end up with a urinary blockage, and we certainly don't want that. I'm eager to get the veterinarian's suggestions on keeping Evan clean yet also dry back there, despite his now chronic urinary leakage. I admittedly feel horrible that I did not notice Evan was becoming so irritated in that area, and I now have learned my lesson and will be doing far more thorough checks of him back there, even if he'd rather I didn't.

All the rambling above aside, if you have some purrs and prayers to spare for my boy Evan, both he and I would greatly appreciate it.

Oh, but we will still share a doodle for today's Caturday Art Blog Hop. It's a flashback, and it one of my favorite Christmas doodles from last year that stars an orange boy like my Evan. 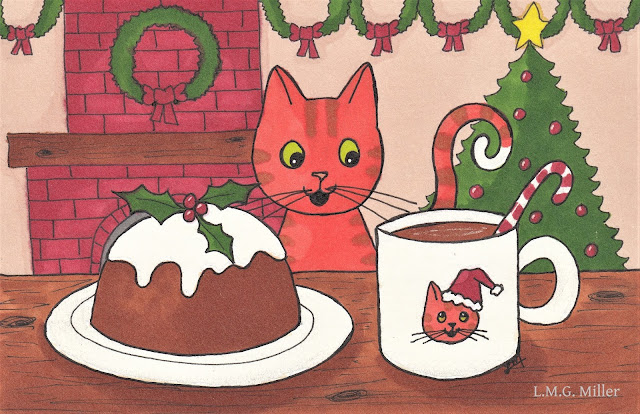 After Evan and I get back from the veterinary clinic this morning, I plan on cuddling him on the couch while I finish our weekly poem and its illustration, as well as relax by working on even more of our in-progress Christmas doodles as Evan and I have a Christmas movie marathon.

***
Tip of the Day
As we said yesterday, we have enough Thanksgiving tips to last through the end of the month, so we're continuing them. Do you know what holiday food we haven't yet mentioned? Cranberries! This here human loves cranberries, but are they safe for our kitties and pups? In moderation, plain cranberries can be given as a small treat to a dog or cat who enjoys them. That being said, it is best to steer clear of cranberry sauces and juices, as those contain excess amounts of sugar and other potential additives that might not be the best for your furbaby. Also be careful with special cranberry dishes, in case they contain not only excess sugar but potentially also toxic ingredients such as alcohol. As always, when in doubt, simply don't offer it to your furbaby.
Since we're on the topic of fruits, we'll go ahead and run through a couple of other fruity treat options for your kitty or pup. If fed in moderation, berries such as blueberries and strawberries are healthy for cats and dogs, as are bananas. Apples are also generally a healthy treat option, but only if you are careful to refrain from feeding your furbaby the seeds. That being said, keep in mind that when fruits like apples are made into pies, added ingredients such as sugar are not so healthy for your furbaby. Of course, also remember that fruits like grapes and raisins are toxic to cats and dogs, so never feed those. Even cherries can be dangerous, especially if consumed in large quantities, as cyanide poisoning can result due to the contents of the stem, pit, and even leaves. So, to be safe, don't feed your furbaby cherries, cherry pie, and most certainly not chocolate-covered cherries this holiday season. Ultimately, if you are not certain that a particular fruit or other food is safe for your furbaby, simply don't feed it as a treat.
Posted by The Menagerie Mom at 6:54 AM

Purring for Evan!
Am sure you and your vet will find a course of action that will help.

We're sorry for poor Evan ! We send him tons of purrs, and hope he feels better soon. Purrs

We are sending purrayers and Power of the Paw to you and Evan and all his caretakers.

Poor baby :( Loads of purrs for both of you. And I adore that doodle SO much!

I am so sorry that Evan doesn't feel well. I will be praying for him. Cute drawing and great tips. XO

Aww, poor Evan. We are purring and praying for him big-time. And Mom L.A., don't be too hard on yourself about not noticing sooner, okay?

Oh dear Evan Mom and I will be sending you "constant" POTP until your problem is healed up and better....maybe there's something that can be done to keep things from getting to the infection stage again. Please get well soon!!

Oh dear. Poor Evan! Dad and I will send you all the purrs and purrayers we can muster up in hopes they help the poor boy heal. We sure hope to hear good news on your return from the vet. Your art- which is always fabulous- can wait. Evan's recovery is most impawtent just now.