Mancat Monday With a Rhyme on the Side

It's Christmas season, and we happily put our trees up the day after Thanksgiving. There are of course always lots of kitty helpers when it comes to putting up the Christmas trees. Evan is always one of those helpers. 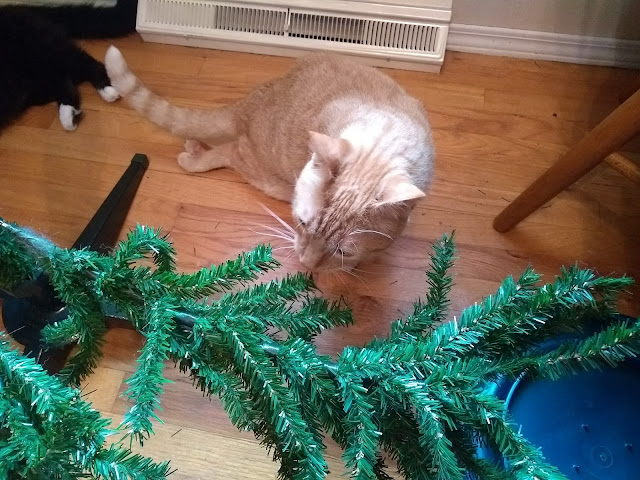 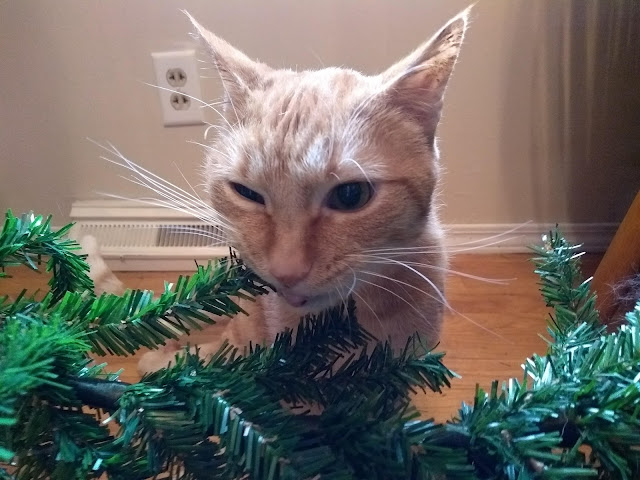 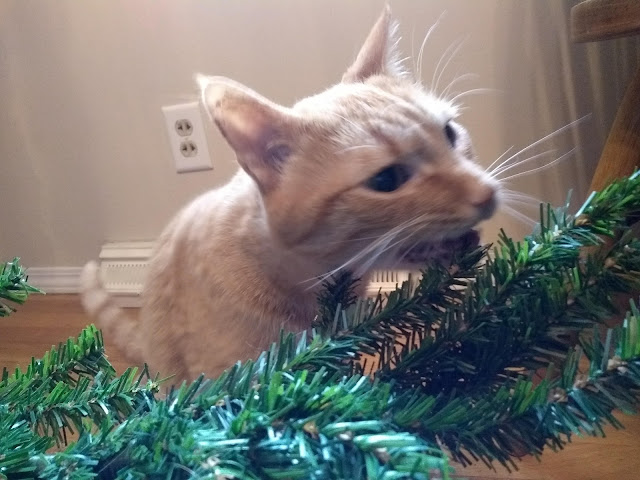 Do you see how Evan is helping to trim the tree? So what if it's a fake tree? He'll trim it anyway.
Evan is doing very well after being diagnosed with a UTI on Saturday. His hind area is still a bit irritated, since the UTI worsened the urinary incontinence he already had and that resulted in him getting what's called urine scald. But, even that has improved since our amazing vet cleaned him up and gave him some antibiotics. Since Evan was due for it in early December, 7-year-old Evan also got his senior bloodwork while he was there. We'll have those results today, which I'm hoping and praying are good.
Thank you all again for your purrs and prayers for my boy Evan! He and I appreciate it more than we could ever express!
***
Now, we are finally sharing our poem for last week's Thoroughly Poetic Thursday challenge, hosted by none other than Angel Sammy.

As always, our host shared a photo prompt to help guide us. The prompt for this poem was this fantastically festive one here: 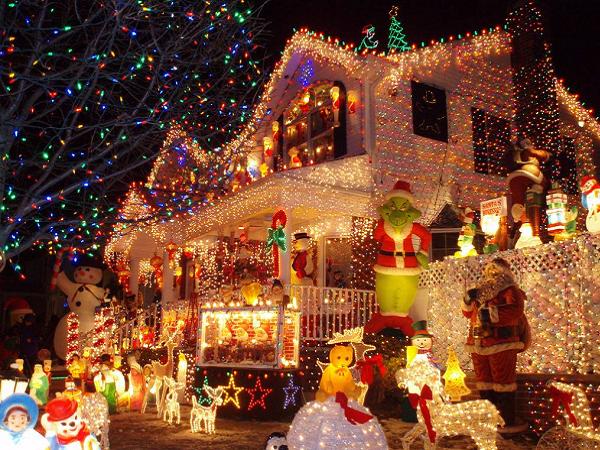 When I first saw this bright and happy image, the first thing I thought of was the movie National Lampoon's Christmas Vacation. It's a tradition in my family to watch this movie after decorating the house for Christmas, which always occurs the day after Thanksgiving, that being Black Friday. This is probably my favorite Christmas movie of all time, and so I decided to somewhat mildly base my poem off of it. For anyone who isn't familiar with the Christmas Vacation movie, it's about a family man named Clark, and the movie essentially portrays how he and his chaotic clan celebrate Christmas. It's full of hijinks and havoc, and I love it. In one segment of the movie, Clark decorates his house with so many lights (25,000 bulbs, according to Clark) that his somewhat senile aunt asks him, "Is your house on fire, Clark?" My poem doesn't follow this same storyline, but it was inspired by it nonetheless.
Anyway, if you'd like to read my poem, which is only a few days late, here it is.
Is Your House on Fire, Clark?
No one loved Christmas more than Clark.
Each year he searched for the perfect tree, near and far.
He waited all year for the chance to deck the halls.
Turning his home into Christmas land was, to him, duty's call.
Finally, after months of unfestive boredom, Christmas was near.
Clark pulled from storage his boxes of lights, ornaments, and reindeer.
The perfect tree was found, chopped, down, and place in his house.
Christmas music filled the home's rooms, nowhere near as quiet as a mouse.
With every room inside the house filled with festive decor,
Clark turned to stringing the outside with lights, and so much more.
He had boxes upon boxes filled with lights to make the house glow,
Each strand boasting roughly a dozen tangled knots or so.
Old Mrs. Jones strolled by, walking her cat,
Because she was a woman who did exactly that.
The cat, named Snot, gave one of Clark's tangled light strands a slap.
By some miracle, the strand had one less knot, just like that.
After a few more cat slaps and a few less knots,
Clark asked Mrs. Jones if he could borrow the quite helpful Snot.
The old woman shrugged and said, "Sure, I guess.
I'll come pick him up later, with my blind old bat of a husband, Wes."
Clark thanked Mrs. Jones and then he and Snot got to work.
They undid roughly a thousand knots, certainly no fewer.
Strand by strand, Clark strung the lights all over the siding and roof,
Of course all the while humming each and every Christmas tune.
After an afternoon of laboring with the endless lights,
Clark asked Snot the cat, "Are you ready for a festive sight?"
The Christmas-addicted man plugged in the lights and was nearly blinded that night.
His house glowed with 25,000 bulbs, if his math was right.
The lights in the rest of the neighborhood may have flickered a time or two,
But Clark did not notice, for the sight of his house was all that he knew.
"We did it, Snot!" Clark said with a laugh.
As he took in the sight, he cheered and clapped.
Right on time, Mrs. Jones returned for her cat.
Snot made his way into the woman's arms and batted at her hat.
Mr. Jones came along, squinted his ancient eyes, and asked, "Is your house on fire, Clark?"
With a smile, Clark replied, "You could say that. My house is aflame with Christmas spark!" 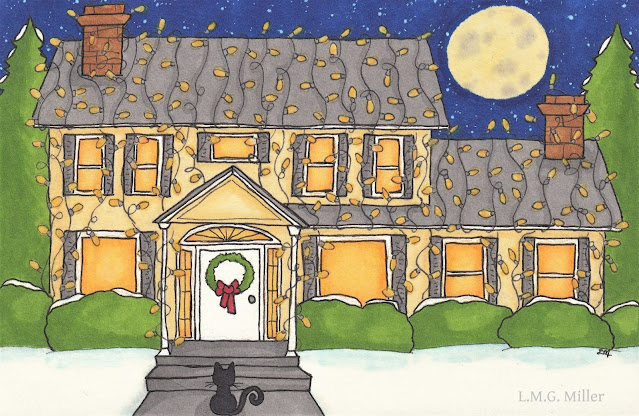 ***
Tip of the Day
Our final tip for the month of Thanksgiving, and a tip that can relate to all holidays, is to know your veterinary clinic's holiday hours. What's more, since most general veterinary clinics are closed on holidays, make yourself aware of the nearest emergency vet clinic that is open on holidays. Your usual veterinary clinic will likely have a recommendation for an emergency clinic for the hours and days they are closed. Just in case there is an emergency on a holiday, such as if your kitty or pup sneaks some food that is less than good for them, simply do a little research into nearby emergency clinics, know their hours and location, and have a plan in the event that a medical emergency might happen over a holiday.
Posted by The Menagerie Mom at 9:00 AM

Evan, it's good to read that you are doing well now!
How embarrassing; the whole interwebs knows about your hiney!

Nice to see Evan so enthusiastic about the tree !

I think the tree is making him feel better!

I hope you get all good results on Evan. Great poem and drawing. And excellent tips, as always.

We love how Evan is helping. :)

Evan is a fabulous helper and snoopervisor, and i'm so glad he is feeling better and up to the job.

First of all so happy to hear Evan is doing much better. I'm sure he's no longer so miserable with that UTI and irritation. Enjoying a little nibble on the tree is always fun!! Secondly that poem is fabulous. We thought of National Lampoon Christmas too when we saw the photo and just KNEW there would be others who would think that too. It's my VERY FAVORITE movie to watch and the first one of our Christmas collection that we see every year. Thanks for being our poetry partner!!