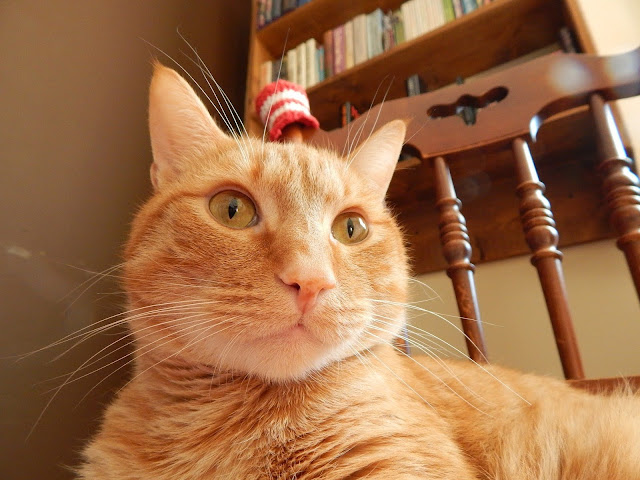 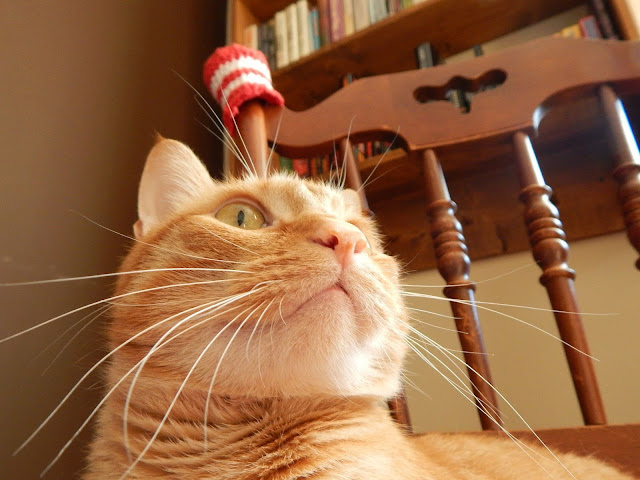 Those photos are actually from years ago. They're probably 4 or so years old. At that time, we had recently won a Dr. Seuss giveaway over at Ellen's fantastic blog. Her blog is of course the one and only 15andmeowing, which includes a lovely kitty named Emmy who happens to be one of the hosts of today's Dr. Seuss Day Blog Hop. The other hosts are Timmy of Timmy Tomcat and Ranger of The Adventures of Ranger, and you can join the Dr. Seuss Day Blog Hop over at Comedy Plus.

Back to the Dr. Seuss giveaway we won all those years ago, Ellen had crocheted the hat from The Cat in the Hat, and I thought it was the cutest thing. I tried to keep the hat safe from the cats by hooking it on that chair Evan is sitting on in the above photos. That attempt was a failure, though. The cats indeed stole the hat anyway, and now I haven't seen the Cat in the Hat's hat in some amount of time. I will continue to search high and low for it, and I am determined to find out in which corner of the house the kitties hid the Seussical hat.

But that's enough rambling. We usually participate in Angel Sammy's Thoroughly Poetic Thursday challenge on, of course, Thursdays. This week, though, we're sharing our poem on Tuesday. Why? Because, well, this Tuesday is indeed rhyming master Dr. Seuss' birthday. My weird rhymes can't hold a candle to those of the famous Dr. Seuss, but I'll still share my poem today in his honor.

Our weekly poetic host Angel Sammy always shares a photo prompt to help us get to rhyming. The prompt for this week is this simultaneously cute and sad image here: 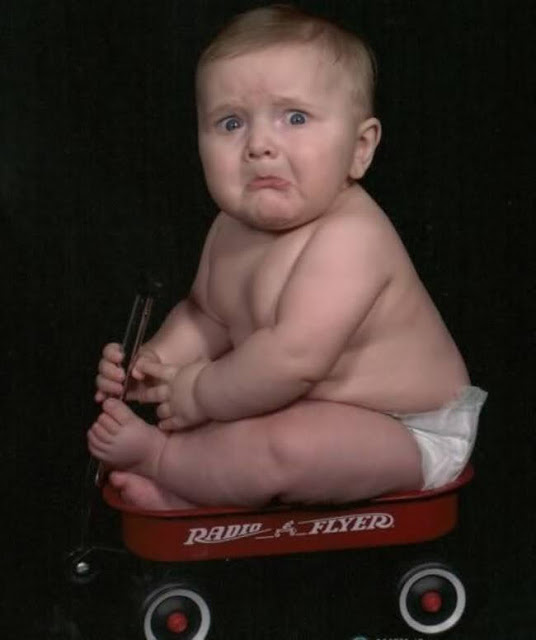 Obviously, I wanted to channel Dr. Seuss even just a little bit for my poem this week. Like I said earlier, I can't hold a candle to Dr. Seuss and his poetry, but I did my best to scribble up a poem in his honor. And so, here is my Dr. Seuss Day poem.
Green Jam on Toast
Silly Billy was his name.
Sharing his knowledge was Silly Billy's aim.
There was something Silly Billy wanted everyone to know,
And that was the deliciousness of green jam on toast.

Silly Billy traveled in his wagon,
Which was as fiery red as the breath of a dragon.
Silly sought after listening ears,
And on that mission, in his wagon he traveled far and near.

Finally, Silly Billy came upon a certain someone.
Silly Billy dragged out the stranger's name, which was Old Edmund.
"I'm busy," is what Old Edmund said to Silly Billy.
"Go away!" Old Edmund shouted, his tone quite grinchy.

"Would you like green jam on toast?" Silly Billy asked.
And then he added, "It will be the best food you've ever had!"
Old Edmund spat and shook his head.
"No, no, and NO!" the grinchy old man said.

"What if it's served with fish?" Silly Billy asked.
"Maybe a red fish? A blue fish? How about that?"
Old Edmund shouted, "I won't eat green jam on toast!
No, I will not! Nope! Nope! NOPE!"

Trying again, Silly Billy said, "What if you get to dine with a fox in socks?
How about that? You can't deny that really would rock."
"I don't want your green jam on toast!" was the grinchy reply.
"No matter what you offer, I will NOT give it a try!"

Old Edmund sniffed the green jam on toast.
"Go ahead! Eat it!" Silly Billy exclaimed. "You'll love it! I know so."
Grumping and grinching in no surprising way,
Old Edmund took a bite as Silly Billy waited for his yay or nay.

Old Edmund chewed, swallowed, and then took another bite.
"Huh," he said. "This is actually quite all right."
Silly Billy clapped and cheered for his green jam on toast.
The cat in its hat handed more to Old Edmund, who found it not even a little bit gross. 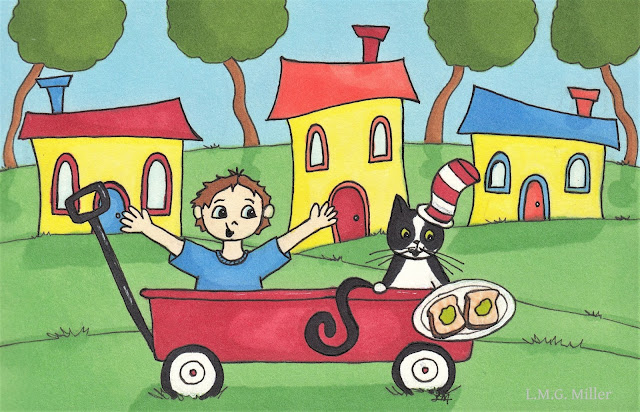 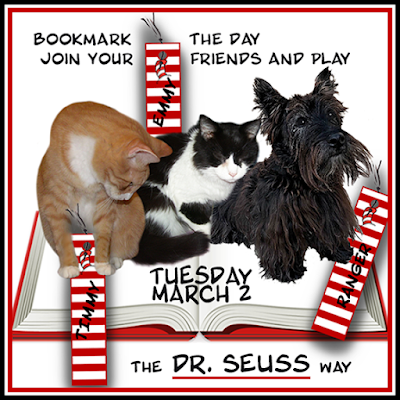 ***
Tip of the Day
Yesterday, as part of National Pet Poison Awareness Month, we mentioned the importance of having solid plans for taking your furbaby to a local veterinary clinic in the event that they are exposed to a poisonous substance. Along these same lines, also don't forget about the ASPCA Poison Control Center, which you can call 24/7. The phone number is 888-426-4435. This is an option in perhaps a bit less dire circumstances, when it is more likely that immediate medical attention is not needed. The ASPCA Poison Control Center can help you determine, for example, if the amount of chocolate your dog ate or if the pill of your human medication that your cat swallowed is something that might warrant a rush trip to the vet. Though, they can also potentially recommend treatments or at-home first aid tips in the case of poison exposure. There is the chance that you will be charged a consultation fee, but, should you need professional poison control advice immediately, that number might very well be a good one to call.
Posted by The Menagerie Mom at 6:26 AM

Nice post. I haven't participated in these blog hops for a while, and this is the perfect opportunity. My post is not so humorous as it is an informational post about the Dr Seuss Museum. I must visit someday. Like the design on your blog, too. Many purrs.

A great Dr Seuss poem all your own...

A great take on "Green Eggs" that spreads cheer today! Hop that hat, that was hidden by a cat, shows up someday, that is that!
Timmy and Family

I guess the kitties want to be sure they won't have to wear that hat. Excellent poem and drawing. That was a clever spin on the photo. Happy Dr. Seuss Day! XO

Terrific post all round! We love the hat on the chair, the poem ROCKS and the doodles are the best! We hope you guys have a marvellously happy Dr Seuss Day!

We won one of Miss Ellen’s crocheted Cat in the Hat hats too. I’m surprised the mom didn’t try to make me wear it this year. ~Ernie

OMC, that was so much fun, you guys! You totally rocked the Seussian theme. Happy Dr. Seuss Day!

A fun tribute to the master. Happy Dr. Seuss Day!

Happy Dr Seuss Day!!
That was the bestest poem!
The toast with the most!! MOL!

The hat will turn up one day ...
when you least expect it
no more hidden away!
You'll never know where it
went off to be
that's the way of cat things
so you see, so you see!

Your poem and graphics are PurrFect!

Love your poem for this special occasion! You managed to have a "Seuss-ical" tough to the poem even though it was all about this little baby in the wagon. Only YOU could do that!!