As I mentioned yesterday, after a bit of a wild September over here, this weekend we're getting caught up on sharing our poems for Angel Sammy's Thoroughly Poetic Thursday challenge.

Today we're sharing the poem based off of the photo prompt not from this week, but all the way from last week, which was this image here: 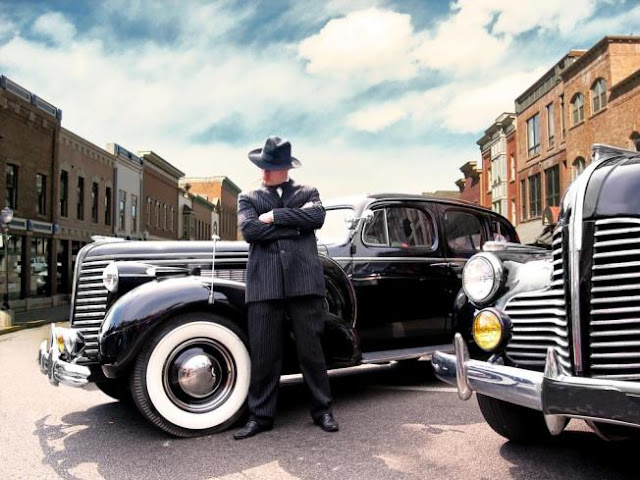 Even when I saw this prompt back in September, I of course already had Halloween on my mind. That said, this image reminded me of a Halloween movie I used to watch all the time as a kid, and which this here adult still watches, and that is Halloweentown. This movie includes a girl and her witchy grandmother who lives in a place called Halloweentown. So how did this image remind me of that? Because in Halloweentown there's a taxi and its driver that are quite memorable, probably because that taxi driver is none other than a skeleton. There's even a scene where the skeletal taxi driver has to speed away from a dog before he loses a bone or two. Anyway, long story short, inspired by the above prompt and the movie Halloweentown, I scribbled up this weird rhyme:

Throw the Dog a Bone

Marley's grandmother lived in a strange place.
It was called Halloweentown, and it would win any weirdness race.
This time, to Halloweentown Marley brought her best friends along,
Those being Florence the cat and Jerome the dog.

To get around town, Marley took the one and only taxi.
That itself was a strange thing, in case you were asking.
The taxi driver named Lenny was a bona fide skeleton.
In truth, bones and more bones were all there was to him.

Lenny was never all that excited to see Marley and her furry friends,
No doubt because Jerome the dog had for Lenny an interest with no end.
After all, Lenny was made of bones,
Something that was very much beloved to Jerome.

On Halloween night, Marley prepared herself for the festive fun,
Looking like a true witch by the time she was done.
Florence refused a costume, but she still fit in just fine as a black cat.
With a white sheet off her bed, Marley turned Jerome into a ghost just like that.

Unfortunately, Jerome had broken into the Halloween candy stash earlier that day.
He was bouncing off the walls, almost literally, suffice it to say.
The hyperactive pup hadn't calmed down one bit when Lenny's taxi arrived,
And when he saw the skeletal fellow, the dog had more than orneriness in his eyes.

Lenny screamed and yelled and ran up and down the street,
While Florence watched and Marley yelled, "Jerome, no! Sit! Come here for a treat!"
Finally, Lenny seemed to form a plan of his own,
And that plan was to indeed throw the dog a bone.

No longer screaming, though now missing just a little part of his leg,
Lenny jumped back into his taxi, peaking out only his head.
Jerome lolled out his tongue in a drooling smile,
Enjoying his new toy in his festive ghostly style. 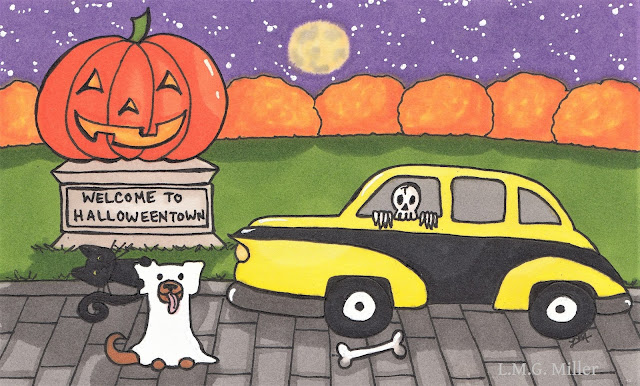 And we'll go right on ahead and use that silly little illustration as our contribution to Athena's Caturday Art Blog Hop.

Happy Caturday, friends!
***
Tip of the Day
As we mentioned yesterday, we're dedicating October to tips all about Halloween. We already discussed keeping wreaths, garland, and other similar Halloween decor either pet-friendly or out of your furbaby's reach. Today, we're expanding on this with a tip that we've covered in a variety of ways in past tips. We're talking, yet again, about candles. This time of year, candles often become more popular because of cool weather, and because of the delicious scents often associated with this season of autumn. What's more, candles often come into play when we carve jack-o'-lanterns. Jack-o'-lanterns can pose just as much of a risk as open candle flames. Curious paws or faces, or even wagging tails, could be burned by candles out in the open or those in a pumpkin. Dangerous and destructive fire could also result if a kitty or pup knocks over a candle, or a jack-o'-lantern containing a candle.

For the above reasons and more, light exposed candles or those in jack-o'-lanterns only if they are safely out of the reach of your furbaby, even if that means lighting them in a room not accessible to your kitty or pup. It is also of course best that candles or jack-o'-lanterns be left lit only if you are available to monitor the situation. If you are not able to keep an eye on a candle, jack-o'-lantern, and nearby furbabies, then do not leave any flames lit.

Candles and jack-o'-lanterns can make for very festive decor. However, flames can of course pose a risk to your furbaby, and also to your home in general. Therefore, always put the safety of your furbaby and everyone else in the home first when it comes to fiery festivities this time of year. Also, of course, be aware of the safety of wildlife if you light jack-o'-lanterns outdoors.
Posted by The Menagerie Mom at 1:31 PM

Love the poem and doodle! That's a Halloween movie I'm not familiar with.

Great poem and I like the drawing too. Excellent tips, as always. XO

I love the picture this week. Not sure about the mobster in the photograph though!
Battery powered fake candles are popular these days, and I think a far safer way all round to add the light and flicker to a pumpkin face, indoors or out.
Purrs
ERin

That was totally worth waiting for! LOL Love it - very Halloweeeeeenish and spooky - same with the doodle! Thanks for joining in the poetic fun.

We loved the poem - it was a furry funny story!

Candles - hmmm. Yes, this is a problem We have effurry week, with the Sabbath candles.

That movie and the sequel are favorites here, too, so i thank you for the reminder of a fun scene!

Love tht doodle. A friend used to drive a cab like that for his car.