Two legs are just as good as four.

Since Evan's Mancat Monday post was sabotaged by Toby's whiskers yesterday, I told Evan that he could instead take the lead in today's post. Evan thought long and hard about what he wanted to show you all today, and he decided that he's long overdue to show off his mad skills and overall awesomeness. 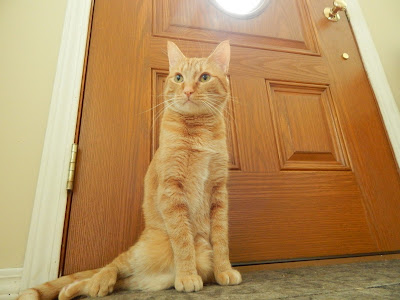 For those who don't know or don't remember, Evan's hind legs are paralyzed. This is the result of a coyote attack that killed Evan's mom-cat and litter mates when he was roughly 6 weeks old, not long before I met him.

Although I try to be socially acceptable and not spew doting praises about my furbabies every second that I'm out in public, I will happily discuss them when the opportunity arises. Needless to say, I am very proud of my boy Evan and how he handles his situation in life, which is why I always just write off the sad or pitiful looks that some family and friends send my way when hearing about my paralyzed cat. I am often asked questions like, "How does he get around?", "Can he play?", "Is he happy?" I sometimes wonder what people picture when I tell them about Evan. Granted, a paralyzed cat is not something you see every day. So I can't help but wonder, do people think that Evan can only lie around all day, looking sad and pathetic, unable to get up and go like a "normal" cat?

Let me tell you, Evan can get up and go just fine. He can certainly outrun his mom when he knows she's about to give him a wash down, or when he thinks that it's his turn to get shoved into that dank cell of a PTU. The boy is like greased lightning when he wants to be. He runs, he plays, he has fun, lots and lots and lots of fun.

So, to prove this, Evan has decided to share a video of himself today. Let this mom interject for another moment, though, and admit on his behalf that Evan was a bit shy at being recorded at first and chose to stay coy and far more stationary than typical in the first part of the video. So, in case you want to fast forward to just a small example of Evan's mad skills in athleticism, he gives a demo right around the 1:20 mark. (Oh, and just a little FYI, Evan is playing with a broken off piece of an egg carton in this video. Because, well, who doesn't give their kids trash to play with?)


Certainly not something you see every day, huh? When I try to step back and watch Evan from the perspective of someone who doesn't see that every day, I think, Yeah, that must be kind of weird to witness. At the same time, though, I am so used to it that I can't even imagine Evan up and walking on four legs. Honestly, what would that even look like? I don't know, because I've never seen it. And I'm okay with that, because the Evan you saw above is the Evan I've always known. What's more, he loves life, and so all is well with me.

Can you tell I'm just a tad bit of a proud momma? Probably a little too much so. But what can I say? Evan is, after all, my shameless momma's boy.

Have a beautiful Tuesday, everybuddy!

***
Our Tip of the Day:
Today's tip is simple, and also a repeat at least once over now, and that is to please consider rescuing or adopting a special needs animal at some point in your life. Special needs animals can enjoy life just as much as any other, and they also have just as much love and happiness to give. Because of the special considerations that go into their care and even because of their appearances, animals with special needs are often overlooked by people looking to adopt, and so many of these sweet and happy and loving animals never make it to a forever home. So, please don't overlook a cat or dog or any animal simply because it is "different". You never know, that three-legged or one-eyed furbaby could be your furry soul mate!
Posted by The Menagerie Mom at 12:03 AM

That was so great to see Evan in a video. He really does get around very well. And has such a good time. You sure are a most wonderful person to give him such a great home and take such good care of him. He does look like such a happy boy.

Go Evan! Nothing stops you. :)

Awesome video! Not sure we could keep up with you good buddy!

Thank you for sharing this video of Evan in action, he is amazing! I am impressed at how quickly he moves. I think it is wonderful that you adopted a cat with special needs and are giving him the best life he could possibly have. So sad to think of how many in his situation that are euthanized or spend life in a shelter.

What a gorgeous boy Evan is..i was really actually fascinated that although paralysed his tail wags! Bodies are amazing in how they work and compensate..i don't feel sorry for your sweet boy at all as he is clearly very happy and healthy :) i don't see disability as a draw back for animals being adopted..we all are different and animals are as well.Lovely post hugs Fozziemum xx

Evan, I didn't know your back legs were paralyzed, but I could tell from photos that you were a happy and content boy (besides being a very handsome boy). That egg carton didn't stand a chance--you showed great hunting and snatching skills. My orange boy Connor would love to come play with you. :-)

Evan is precious. He has no idea that anything is different for him. It was fun watching him play. And the first photo...squeee! Ginger tabby boys are love bugs, and Evan is no exception. XOCK, Lily Olivia, Mauricio, Misty May, Giulietta, Fiona, Astrid, Lisbeth and Calista Jo

Evan is having a lot of fun ! It's great to watch him play ! Thank you for sharing this video ! Purrs

Aaaaaaw You go Evan. We luv Evan and think hims pawsitively handsum and adorable. We do worry 'bout things like sores and rug burn from draggin' himself, but we just send purrayers. A rug burn is no reason to have to die. So good fur you fur 'doptin' and luvvin' him furst.

I will admit that I didn't know that Evan's back legs are paralyzed. I loved the video! You SHOULD be one proud mama! :-)

Evan is so cute. I loved watching his video and he is obviously a very happy boy.

I think you have every right to be a proud mama! Evan is amazing in every way. If only humans were able to accept adversity with as much courage as animals do!

I don't see anything different between Evan and me. She is adorable and I like to see her playing. The story made us very sad though :( Pawkisses for a Happy Day :) <3

What a fun video, Evan is adorable, a silly sweetheart!...So happy he has such a loving family who is proud of him and accepts him as he is=such a precious baby!...Kisses to darling Evan...J, Calle, Halle, Sukki, Mommy Cat

That was awesome! We loved seeing Evan having so much fun. I laughed at the part, right before he really got into playing, he decided to nonchalantly take a bath. Ha!