Can any of you guess whose toesies you will be seeing today? Would you believe us if we told you it's none other than the elusive Eddy? That's right, believe it or not. 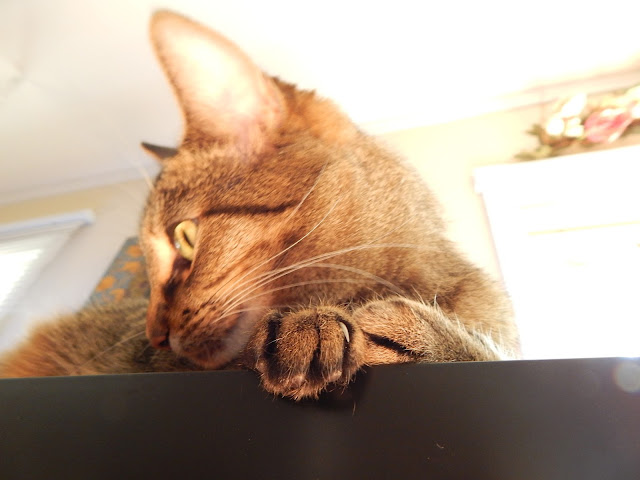 Of course, it wouldn't be an Eddy shot if there wasn't some semblance of blurriness involved. She rarely disappoints in this regard.

That all being said, I had a proud momma moment with Eddy the other day. See that long nail she has in that there photo? Eddy's nails are not the easiest to trim, you could say. Don't get me wrong, though, because this girl is not even the least bit aggressive during nail trims. She will actually let me trim her nails when she's sleeping. But, that's easier said than done when the kitty at hand is also a light sleeper who only takes speed naps. She is usually only asleep and immobile long enough to get something like one nail trimmed at a time.

I'm rambling, though. Where I'm going with this is that the other day, for the first time ever, Eddy let me trim her nails while my sister held her. My sister is just about the only other person in the world besides myself who gets to see Eddy on a regular basis. Since my sister lives with us, Eddy accepts her existence. But, Eddy allowing my sister to hold her is a whole other story. Nevertheless, the other day my sister scooped her up, Eddy froze, and then sat still like that while I trimmed all 18 of her nails. That made this momma proud. Some days, that's all it takes.

Wasn't that a riveting story? Nothing like a real nail-biter to get your day started. Well, anyway, we're wishing you all a terrific Tuesday!


***
Our Doodle of the Day:
Our 2018 Blogging Cats Weekly Planner informed us that today is Croissant Day. Obviously, that had to be celebrated in our doodle for the day.

***
Our Tip of the Day:
One of our final household safety tips is about some of the dangers that might be found in your office, study, or other similar area in your home. One of these potential dangers is none other than a shredder. Especially if you have a shredder set to automatic shredding, a curious paw or even tongue could potentially be injured if they find their way to the shredder. So, if you have a shredder, do be sure to keep it off, unplugged, or hidden away when not in use. Another item that could potentially be dangerous is those scissors. The main danger here is of course the sharpness of them, so to keep your furbaby safe, keep all scissors closed, concealed, or hidden away. Also don't forget about small office items, or any items around the house, that could be a choking hazard, or that could lead to bowel perforation or obstruction. For example, paperclips might be tempting items for a kitty's curious paws or for a pup who likes to pick things up in their mouth. Even simple pens and pencils could be dangerous, especially if you have a kitty or pup who is a chewer. So, do be sure to keep all small items safely tucked away in a drawer or other container. The moral of the story is to consider all the items you have in your house and what dangers they might pose to your furbaby, and then plan accordingly.

Good for you Eddy - cooperating for the dreaded nail-trim deserves a stolen croissant!

Good Girl Eddy for letting those sisters trim your nails. Well done. You all have a terrific Tuesday.

Eddy, we're not as cooperative when we get our nails trimmed.

That is great that you got to trim Eddy's nails. When you said you trim her nails when she is napping it reminded me of how my niece keeps nail clippers in her vehicle so she can trim her little girl's nails when she falls asleep in the car. Eddy is adorable and I like the drawing of her too. Excellent tip, I never thought about the shredder being a potential hazard.

Bear's funny ... I think he actually plays dead. Sometimes he squirms and growls - but his usual thing is to not move and hope that I'll forget about him (never happened) ;)

We don't get our nails trimmed as we go outdoor. It's nice you were so cooperative, Eddy ! Your doodle is adorable. Purrs

Eddy, that must have been an interesting moment for you! The Hubby hasn't quite figured out how to trim Manny and Chili Bruce; maybe I need to hold them while he does the click, click, click!

I have never once dared to clip *any* cat's nails! Speed naps...I love that!

No shredder in this condo unless you count my claws. Yo Eddy, no one touches my claws so I was kinda disappointed that you let that sharp claw go so easily.