Rewind Wednesday with a Mummy of a Mutt

Today is a rewind sort of day. Exactly one year ago today, pup Astrid had the outer toe removed from her hind right paw. Many of you might remember that she had a growth on that paw pad that was initially believed benign. On October 10, 2017, the growth itself was removed. Thereafter, further cytology on the tumor revealed it was a malignant sarcoma, much to the surprise of both Astrid's veterinarian and myself. What's more, not all of the margins had been removed.

Astrid was scheduled for another surgery just one week later, on October 17, 2017, to have the entire toe removed. After much deliberation, our veterinarian believed that toe amputation should suffice for full removal of the tumor and all of its margins, rather than partial leg amputation. Long story short, he was right. Removing the toe indeed removed all of the margins, and no signs of metastasis were found anywhere else on pup Astrid. She has now been cancer-free for exactly a year!

Of course, following the surgery, we still had recovery to work through. During her recovery last October, pup Astrid had a mummy's foot for a couple of weeks.

Let me tell you, Astrid hated that thing. That bandage was the bane of all our existences for quite some time. The cone of shame was donned in full force for that bandage. Otherwise, Astrid proved that she would remove the bandage (and once even her sutures) within seconds. Like I said, there were a rough couple of weeks here at our house last October.

In honor of bandaged Astrid, this was one of the Halloween doodles I shared last year: 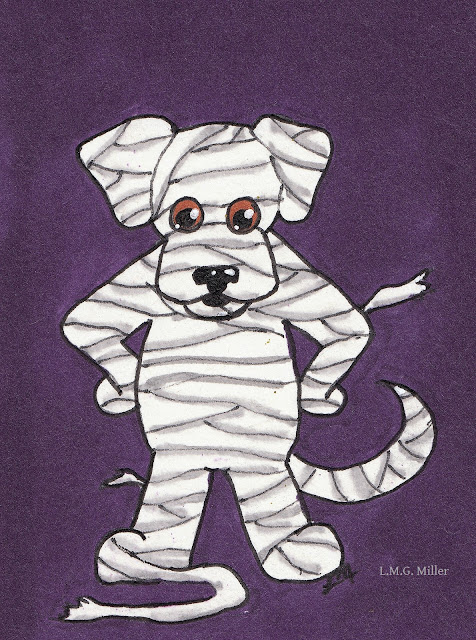 Last week, since I was creating Halloween bookmarks for an art fair, I decided to take that mutt of a mummy and turn it into, well, a bookmark.

Just as with the other bookmarks we've been sharing over the past couple of days, I found a corny little saying to go with that image. See?

Goodness, we sure gave you all a hearty dose of bandages and mummies in this post. Well, 'tis the season!

Bats are not always found outside, though. Bats can sometimes find their ways into buildings, including attics or other areas of homes. If you live in a house or apartment where bats are discovered, keep your furbaby away (and also, of course, try to keep yourself safe), and certainly do not allow your furbaby to chase or play with any bats. A bat can bite quickly and without notice, and rabies could potentially be transferred that quickly if the bat at hand is infected with it. If a bat is unable to be safely escorted out through a window, or in another safe means that does not mean direct handling, then contact animal control or another relevant organization for the safe removal of bats.
Posted by The Menagerie Mom at 12:25 AM

What a cute bookmark!

We're glad Astrid is doing so well now. We love the mummy doodle.

So Astrid is doing all right now. Love the doodles and the book mark. Well done.

A whole year already! WOW! Glad Astrid is all over it now. How can we get our hands on some of your bookmarks?!?

Brave Astrid! Glad you are all better. Love the bookmark and the doodle.

That bookmark is great, i am so glad Astrid recovered.

Bats are wonderful creatures, they eat so many mosquitoes. You are right that we should look and not touch, stay away, and if one gets in the house, a really long ostrich feather duster placed gently over it will calm it down and make you able to gently get it out.

Congratulations on a year Cancer Free, Astrid.
And I love the drawings.

We are happy that Astrid is doing very well now. The Halloween doodle just fits the moment right. The bookmarks are just great. The wrapped up in a good book is just a wonderful saying. Thanks for the share. Great tip for the day as always. Have a wonderful day.
World of Animals

I'm so glad all of that is behind you, Astrid!

Poor Astrid went through a tough time. I am glad she is fully recovered and cancer free now. You are so clever with the sayings on the bookmarks and the drawings are wonderful too. Excellent tips as well.

We love that bookmark. So cute! Astrid, we remember when you had your mummy foot. We're glad you're all better now. :)

We purrayed super hard for Astrid last year and we are over the moo that she is doing so well (even if she was such a bed patient) But I gotta say, the doodle (and the bookmarks) are spooktacular!
Purrs
Marv