We're here for another Thursday edition! As always, we'll kick off this day with the Thoroughly Poetic Thursday challenge, hosted by Angel Sammy and Teddy.

Each week, our hosts offer a photo prompt to aid our poetic adventures. This week's photo is this stunning one here:

As I've mentioned previously this month, I've added one extra challenge for myself. For the month of October, I intend to make all of my poems centered at least loosely around Halloween. Let me tell you, that there photo above of Old Faithful is a gorgeous one, but it gave me a run for my money in terms of trying to meld it with Halloween. I ended up with a strange Halloween tale starring the sister of Helga, who was the star of the poem we scribbled up last week.

Okay, I'll stop yammering now and just get to the poem. As per usual, it's ridiculously long, weird, and all sorts of wacky. You've been forewarned.


There was once a young witch named Hilda,
Who was not to be confused with her sister named Helga.
Hilda's sister Helga was a witch who broke her broom,
And so ended up with a bicycle that could soar and zoom.

Needless to say, Hilda was jealous.
She didn't have a flying bike of her own to relish.
Hilda wasn't about to let that get her down, though.
Oh, most certainly not, no!

On Halloween night, Hilda was to attend a party,
And though she had no flying bike, she would not be tardy.
This party of course included a pumpkin carving contest,
And Hilda intended to arrive first and with the pumpkin deemed best.
All she needed to do was figure out how to make that come true.
Her pumpkin was carved and perfect, that she knew.
Now all she needed was transportation that was fast and new.

And so, Hilda the young witch put on her thinking cap,
Which was black and pointy and did crackle and zap.
With the aid of that magical hat,
And of course with the company of Jack her orange cat,
Hilda had an idea that was brilliant, healthy, and fat.

As she donned that thinking cap brimming with magic,
Hilda had a thought that was free of brooms, bikes, and traffic.
She didn't need a vehicle on which to soar.
She just needed to go to the grocer's store!

Oh, that didn't make any sense?
Here, the facts we will now condense.
There was a potion and its spell that required the wings of a gnat,
And this magic would allow for quick travels just like that.
That meant Hilda could show her sister how it was done,
With neither a broomstick nor a bike with wheels that spun.

First, though, to the grocer's Hilda must go,
For she had not gnat wings, nor the necessary beetle toes,
Both of which were required for this magic to work just so.
Hilda still had herself a broomstick that flew,
But it was old and slow and just wouldn't do.
On it, her short trip across town would number one hour plus two.

Telling herself that all would soon be right,
Hilda and her cat Jack walked to grocer's with steps quite sprite.
The young witch hurried her way through the store,
And when finished, she practically ran out the door.

Excited to start on her potion and its spell,
Hilda ran to the cottage in which she and Jack the cat did dwell.
She went to the cupboard and pulled out her cauldron,
Eager to stir up her magical concoction.

Then Hilda ran to the shelves of her little library,
Which was filled with books about spells, potions, and magical fairies.
From a shelf she pulled out a copy of Cooking Up Magic,
All while hoping her lack of culinary skills would not end up tragic.

Gnat wings, beetle toes, wormwood, and a dash of thyme,
Those ingredients left Hilda with a potion that looked like slime.
It wasn't all that pleasant for the nose either, for that matter.
Nevertheless, Hilda pour some in a glass with only minimal splatter.

It looked like slime and smelled like feet,
And the taste of it was far more like a trick than a treat.
Hilda forced herself to gulp it down,
The entire time her face overcome with a frown.

Next, Hilda had to say the potion's accompanying spell,
Which was something Hilda never did all that well.
The words were strange and in their own sort of language,
And they always emerged from Hilda's mouth all mangled and tangled.

With herself, Jack the cat, and her carved pumpkin all in tow,
To the Halloween party Hilda was ready to go.
And so Hilda cleared her throat and did the best she could do,
Loudly and proudly saying, "Abracadabra and bibbidi bobbidi boo!"

Jack the orange cat let out a meow,
Just as he, Hilda, and the pumpkin disappeared, and how!
Through the air they spun and spun and spun all about,
And Hilda let out more than one frightened shout.

Finally, they landed with all sorts of thuds.
Luckily, there was no sign of anyone's blood.
Rising to her feet and looking around,
Hilda instantly knew that something quite wrong had gone down.

Clearly she had not spoken the spell anywhere near right,
For she recognized not a single one of the surrounding sights.
Over there, water was spraying from the ground.
And, oh my goodness, what was that sound?

Clop clop clop went the hooves of, well, whatever that was.
It was big and fuzzy and around it flies did buzz.
Wait, hadn't she read of this place in her books?
That spraying water was Old Faithful, at least by the look!

Hilda had little to no time to take much in,
Before dozens or maybe hundreds of hooves roared in a din.
There, just over yonder, they were heading her way!
Hilda had no intention of sticking around to stay.

As the giant, hairy, hoofed animals began to draw near,
For the life of herself, Jack, and her pumpkin Hilda began to fear.
She didn't know what she could do,
Other than again shout, "Abracadabra and bibbidi bobbidi boo!"

Indeed, in their cozy cottage, Hilda, Jack, and the pumpkin did land.
What had gone wrong, Hilda did not understand.
She simply did not care by that point, though.
Because she would never do it again, absolutely not, no.

With a sigh, Hilda stood and gathered up her carved pumpkin,
Which had somehow survived without a single scratch on its skin.
Hilda said, "Let's go to the Halloween party, Jack, for a far more proper scare.
Don't you worry, though, because we're most certainly just going to walk there." 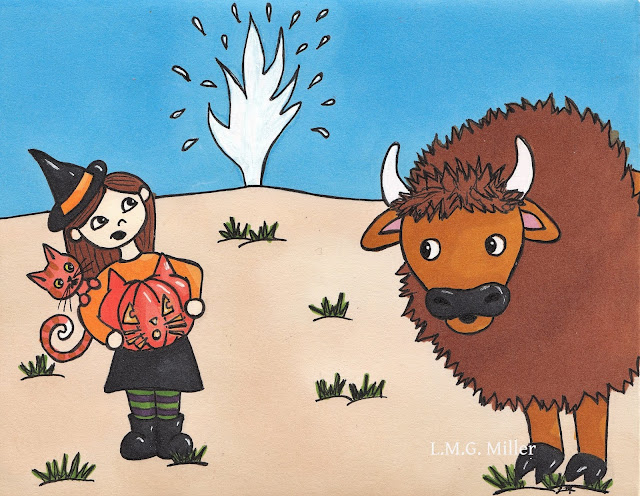 Now, let's see. What else always happens around here on Thursdays? Oh, that's right. Thimble graces you with her presence, all while participating in Brian's Thankful Thursday Blog Hop! 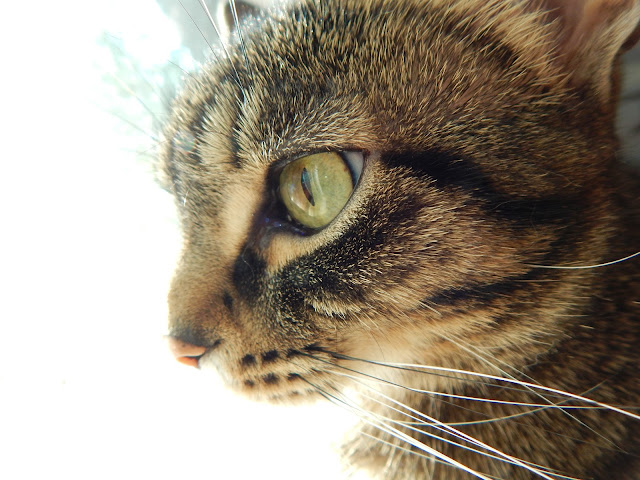 This week, Thimble is glad that snow is not in the forecast. Around this time last week, we had snow flying through the air. While we do enjoy us a white Christmas, we do generally hope to make it past Halloween before we have to pull out those snow boots. This week, though, it's all sorts of autumnal outside, and that makes us happy as could be.

What's more, as always, we're so very grateful for all of you. Thank you for being our friends, friends!


Last but not least, we're here to share the fill-in statements for tomorrow's Friendly Fill-Ins challenge. Ellen of 15andmeowing is the mastermind behind the first two, and I came up with the second two.

We know we don't have to tell you wonderful folk that all of those superstitions about unlucky black cats simply aren't true. That being said, there are unfortunately those out there who do believe such things. There are also, sadly, people out there who might even think to play unjust tricks on black cats on or around Halloween. This is why today we are here to remind you to ensure that your sweet and innocent black cats, and all of your furbabies, are safe inside on and around Halloween. Even if you live in what is believed to be a safe neighborhood, please do keep your black cats, and all of your furbabies, inside and under close observation during the Halloween season. This will help ensure that they don't fall victim to the tricks and pranks of any callous or superstitious people out there. As always, it's better to be safe than sorry.
Posted by The Menagerie Mom at 5:17 AM

That poem is a real smile maker! We are always thankful for no snow, ever, sweet Thimble. Thanks for joining the Thankful Thursday Blog Hop!

What a terrific poem/story!
I worry about black cats out there, and that's why I was super concerned about my neighbor Pearl, whom I posted about. So glad she's got a loving home, though I couldn't tell from seeing her out and about!

Your poems are always so wonderful. We really enjoy each week what you come up with. The doodle is really great. The Halloween themes have been just wonderful. Thanks for the share. Have a great day and it was great to see Thimble today.
World of Animals

I've always envied people that could write poems. Cats too, lol. I've just never understood how people did it though. I'd be hard pressed to come up with a rew lines that were rhymes, or entertaining or thought provoking.

Love your witchy poem and how that mind of your works!

That’s a fun poem, i wonder if the buffalo were are surprised as she was.

That was fantastic! You never cease to amaze me with your poetry and drawings. Thimble is adorable. Great tips, I love black cats. I am very superstitious except about that. I can't wait for the fill-ins tomorrow.

MOL snow, we are still having Summer here.

Oh my! We're visiting all the blog posts that we missed while Mom and Dad were away on a mini-vacay to Maine....we love love LOVE your poem-story for Sammy's Poetic Thursday - Hilda is my kind of girl! Thanks for always pawticipating in Sammy's poem day because it's so very much fun to see the entries that come in based on his photos.