Sometimes I forget that the sights provided by my mancat Evan are not all that typical. After all, the average cat is not hind limb paralyzed like my Evan. That's why, for both myself and for all of you, when I catch Evan doing something that is unique to him, I try to grab my camera to capture him in action. 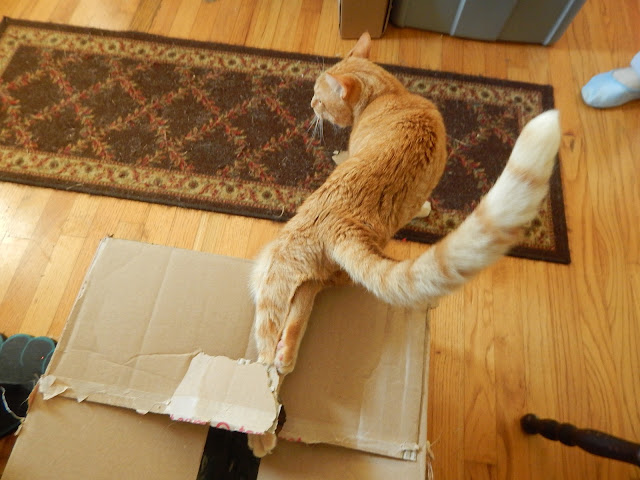 That there is simply Evan dismounting from a box. He loves boxes. He loves to sit on boxes, in boxes, with boxes, and all that jazz. Of course, though, his methods of getting onto and off of boxes are a bit unique, as he does have to work around his paralyzed hind legs. As you can see, though, Evan always manages! 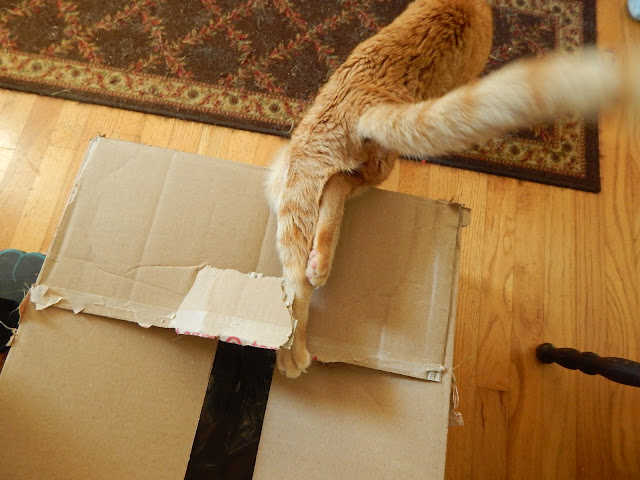 When I first brought Evan home as a kitten, if I'd see him trying to jump off of something, I'd run over, pick him up, and place him safely on the floor. After getting to know Evan much better, though, I came to realize that he not only wants to manage on his own, but also can and will. So, I no longer run to his aid when he wants on or off of something. In fact, 99.9% of the time, he simply doesn't need my aid. He's an independent mancat, after all.

Have a marvelous Monday, friends! 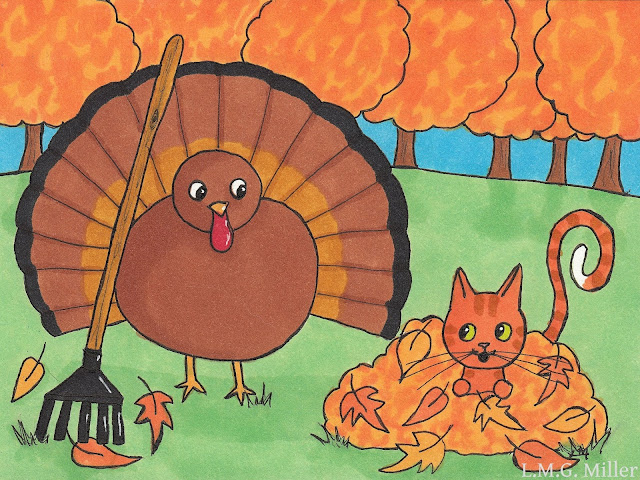 We've previously mentioned sweet potatoes and green beans, and how these vegetables are safe when fed plain, but are best left out of your furbaby's diet if prepared in a casserole or with other added ingredients. Today, we're here to remind you of some of the other vegetables that could make for nice Thanksgiving treats for your pup or kitty, of course as long as they are fed plain. One common and nutritious vegetable is carrots. This orange vegetable can provide a large variety of beneficial nutrients, such as beta-carotene, vitamin C, vitamin K, potassium, and others. Other veggies that are generally safe as a snack for a kitty or pup include broccoli, celery, cucumbers, spinach, and peas. So, if you're pup or kitty wants to be included in the Thanksgiving feast, go for a safe and healthy option, such as a plain vegetables. Of course, though, even when it comes to veggies, it is still best to feed them to your kitty or pup in moderation. And, as you've heard us say many times now, always be aware of any ingredients that are added to foods prior to feeding them to your furbaby. If a veggie dish has been topped with onion, garlic, excess salt, or other similar seasonings, then it is no longer an ideal or safe treat for your kitty or pup.
Posted by The Menagerie Mom at 5:20 AM

Such a wonderful wee boy.

We love how nothing stops Evan from doing what he wants to do.

What a guy! Evan is pretty amazing and it is good to see he does not let anything hold him back :)
Purrs Georgia,Julie and JJ

Good job Evan, getting around and doing what makes you happy. We always like seeing you.Have a fantastic day.

Your Evan is such a little hero!

We are very happy that we got to know Evan on here. He is a very wonderful mancat. Just seeing him and reading about how he does all these things on his own is truly wonderful. We hope you have plenty of great times with boxes this holiday season. Thanks for the share. Have a wonderful holiday week.
World of Animals

Evan knows what he can do, and does it beautifully.

That turkey looks like it’s having a lot of fun with the rake.

Such a cute doodle; it made me smile!
Evan is fascinating; he's an inspiration.

Evan is such an amazing boy and such a cutie too. I love the drawing. Excellent tips too.

Evan doesn't think he has a disability. Did you see that Ernesto's Place they had a hid-leg paralyzed cat and with water therapy and manually working his legs, they got him to walk normally? It was amazing.