We hope all of you friends of ours had a safe and festive Halloween! Did you get lots and lots of treats? We sure hope so!

We're moving on to November now, in case you weren't aware. But, can you believe that we still have some Halloween going on here at our blog? That's right, Halloween is still infiltrating its way in, such as when it comes to our weekly rhyme.

That's right, as we always enjoy doing, we're joining in on Teddy and Sammy's Thoroughly Poetic Thursday challenge. Each week, our hosts share a photo prompt to help us along the way. This week's image is this expansive one here:

As has apparently become the norm for me, I took some liberties with this one. It started with the fact that when I see snow, my mind always ultimately wanders to Christmas. I just can't help it. Given that I was writing this poem during the week of Halloween, though, I didn't want to go all out Christmas just yet. I don't really know what sort of compromise my poem is, but it was trying to appeal to my fondness for both Halloween and Christmas, while also throwing a bone to Thanksgiving here in the US.

That all being said, as per usual, my poem this week is weird and wacky, and also more than a bit twisted. Let me just say that I have no ill thoughts or intent when it comes to Santa, pumpkins, or turkeys. That might make an ounce of sense once you've read the poem. Here it is. Read it at your own risk.

The Holidays with Santa Claws


Santa Claws paced the North Pole snow outside,
Eagerly waiting for his guests to arrive.
It was that most wonderful time of the year yet again,
When he threw a holiday party for his most festive of friends.

Santa Claws felt impatient and simply could not wait,
For he had extra special treats for his friends to enjoy on their plates.
He knew he had really upped his game this year,
And that his friends would surely be smiling from ear to ear.
Santa Claws was getting eager to showcase his surprise,.
He could not wait to see the joy in his friends' eyes.

Finally, through the snow could be heard and seen a sleigh,
Led by horses who did whinny and neigh.
Knowing his friends were finally here,
Santa Claws did not wait for the sleigh to draw near.
Rather, he trotted to it and greeted his friends,
And his warm wishes to them he did extend.

Percy the Pumpkin Head alighted the snow first.
Well, it was more like he rolled from the sleigh headfirst.
The second guest was none other than Tillie the Turkey,
Who gobbled and clucked and was just a tad bit quirky.

"Wonderful! Wonderful! Who is ready for a feast?"
Santa Claws yelled, his excitement fully released.
With his guests, the jolly old soul hurried and scurried inside,
Where Mrs. Claws and the elves did dash and glide.

Santa Claws ran to the table and seated his guests.
This holiday party was bound to be the best of the best!
At the table sat a hungry Percy and a clucking Tillie.
"The menu is fresh and new," Santa Claws chirruped, quite giddy.

Santa Claws usually served cookies and more cookies.
After all, those seemed to be amongst everyone's favorite goodies.
"Are your ready for a most wonderful surprise?"
In reply, curiosity shown in the festive guests' eyes.

Elves with bells on their shoes skipped their way from the kitchen.
With the music playing in the background they seemed quite smitten.
Finally, to the table they made it with platters of food,
Which were covered, the surprise hidden from view.

One dish was placed in front of Percy the Pumpkin Head,
Who was starting to think starvation might make him dead.
Another dish appeared in front of Tillie the Turkey,
Who still gobbled up a storm in a manner quite chirpy.

"Wonderful! Wonderful! Are you ready to eat?"
Santa Claws purred and pranced around on his feet.
"All right, you may see your feast on the count of three!
One and two and three and eat!"

The covers were removed and the food beneath revealed.
In response, both Percy and Tillie let out a squeal.
Their eyes bugged and their jaws dropped.
Santa Claws shouted, "It's so wonderful your heart could stop!"

In front of Percy the Pumpkin Head sat, well, pumpkin pie.
He wasn't sure if he was going faint or die.
One of Tillie the Turkey's own kind also sat in front of her,
All roasted and toasty and served on a platter.

Percy finally stuttered, "You don't by chance have any cookies?"
Santa Claws mewed, "They're not needed with these superior goodies!
Now please, be our guests and dig in!"
Santa Claws's joy was displayed with a grin.

Percy and Tillie tried to be oh so very polite,
As they worked to duck and escape out of sight.
"We'll be back in just one moment's time,"
Was what they said as for the door they made a beeline.

Santa Claws thereafter scarcely noticed their absence,
For he immediately dug into the pie, turkey, and its contents.
He ate himself right into a happy, full stupor,
And fell asleep right there at the table with a snore and a purr. 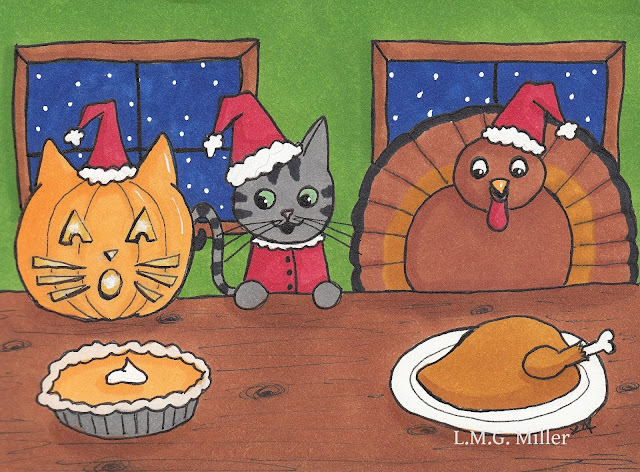 Just as was the case for our poem above, Thimble also decided she wasn't quite done with Halloween yet. She wanted you all to know that, like Evan did on Monday, she taught the ghost that haunted us all October a lesson or two. 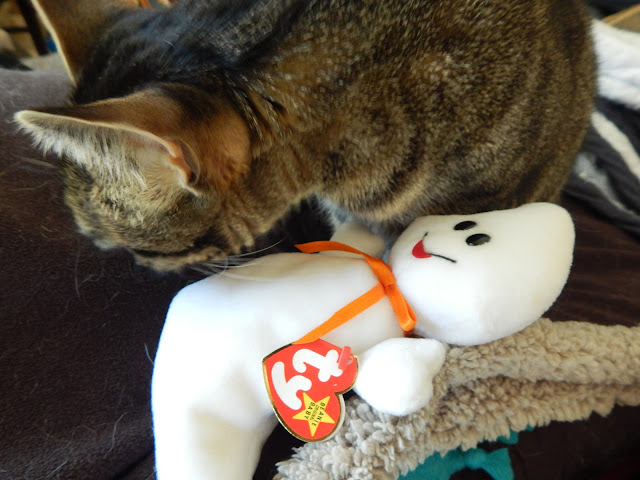 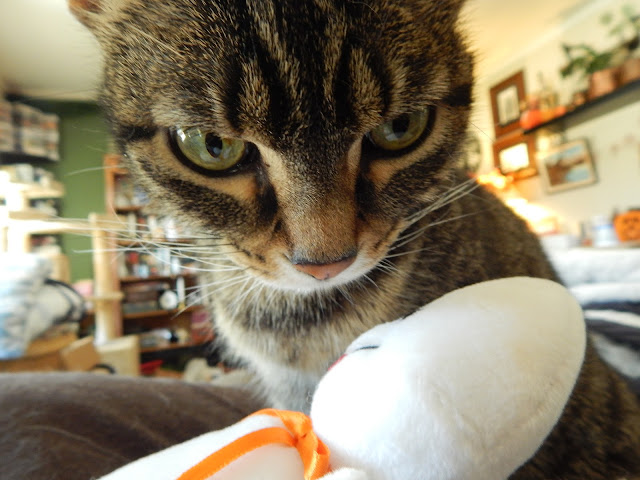 And she has no regrets.

Though we're fans of Halloween here and are sad to see it go, Thimble is nonetheless grateful that the pesky little ghost is gone (thanks to her, of course).

More importantly, all of us here are beyond grateful for all of you out there. Sending you all our purrs, woofs, and happy thoughts!


If you're eager to fill in the fill-ins for tomorrow's Friendly Fill-Ins challenge, then you're in luck. Here are the fill-in statements. Ellen of 15andmeowing is the mastermind behind the first two, and I came up with the second two.

November is Pet Cancer Awareness Month. Just over a year ago, we shared a series of tips on the prevention of cancer in our kitties and pups. We're going to repeat that series of tips over the next few days in honor of this month's importance. We'll start with none other than spaying and neutering. Spaying and neutering your furbabies is not only important for of population control, but also because, like humans, they can develop cancers of the reproductive tract and related systems. This can include uterine cancer, mammary cancer, and prostate cancer.

What's more, timing of spaying and neutering can also be crucial. It is important to ensure that a kitty or pup is of course old enough and big enough for neutering, but also not too old. This is because, for example, there is an increased risk of mammary cancer in female cats and dogs who are allowed to go through one or more cycles prior to being spayed. We could go on and on about this topic, but let's suffice it to say that, as most of you certainly know, it's incredibly important to spay and neuter your cats and dogs for more reasons than one. We'll even say it again. Please spay and neuter your kitties and pups, and do so before they can be affected by an increased risk of cancer.
Posted by The Menagerie Mom at 3:17 AM

I love the doodle, it's so cute.

Thimble, that is quite a look you are giving that silly ghost. Great picture. You all have a really nice day.

We are not sad to see Halloween go but we're more than ready for Christmas. You look darn cute with your pal sweet Thimble. Thanks for joining the Thankful Thursday Blog Hop!

Another magnificent story - Halloween, Thanksgiving and Christmas kind of all rolled into one big PAR-TAY with all the trimmings! We thought that photo might inspire some interesting poetry today - is it snow? Is it sand? Our imaginations take us to all sort of places with photos. Anyway, thanks for joining Angel Sammy's Poetry Challenge - you never fail to entertain us! Love Thimble giving "what for" to that ghostie that's been haunting you. Time to say goodbye until NEXT YOWL-O-WEEN!

Am not ready to look at images of s**w yet!
The Hubby grumbled every time I mentioned buying pumpkins for decorating, so I didn't. Then, when I arrived home yesterday, he'd purchased a pumpkin pie pumpkin, and put it in the front window! OH!

It's funny, what you call a pie, we call a flan! I though pumpkin pies had lids but they don't! hee heeee

We are happy that you are sticking with the Halloween theme for a little longer. We love Halloween so much here at the office. The doodle is so great. The cat pumpkin looking at the pumpkin pie is too funny. Glad Thimble taught that ghost a lesson. Thanks for the share. Have a great day.
World of Animals

What a fun poem. We like how you got all three holidays in. :) Good job, Thimble, in teaching that ghost a lesson.

That was a cute poem. I am glad they managed to escape. Cute drawing and adorable photos of Thimble and the ghost. I am sad to see Halloween go, but at least we still have Thanksgiving and Christmas to look forward to. :)

Oh, dear. Someone needs to teach Sandy Claws some tact. Heeheehee! Fun doodle and poem, and Happy November to all of you!

Your art and poem are pure purrfection!!!

Your poem is the best!
And I gotta say, your art today is PURRFECT!
What a great multi holiday doodle!
I am sorry I've not had a chance to comment. Comments will be sparse over the next few weeks too. I will be reading, but its hard to comment from my tablet. Mom is taking her first vacation in 20 years and is leaving me and her computer at home.
Purrs
Marv

We could see right where that poem was headed, and loved it! Such a purrfect cat thing to do...serve food he knew he'd get in the end.! XOCK, angel Lily Olivia, Mauricio, Misty May, Giulietta, angel Fiona, Astrid, Lisbeth, Calista Jo, Cooper Murphy and Sawyer

you've gotten an amazing weblog here! would you like to make some invite posts on my weblog? play casino