Happy Thursday, friends! Where do we start with the fun and games? Let's begin with today's installment of the A to Z Challenge.

In case we haven't said it enough times already, our alphabetical series of doodles stars my angel Rosie. In this series of doodles, Rosie is going throughout a more or less routine sort of day, doing this and that, A to Z style. So, what's Rosie doing with the letter V? 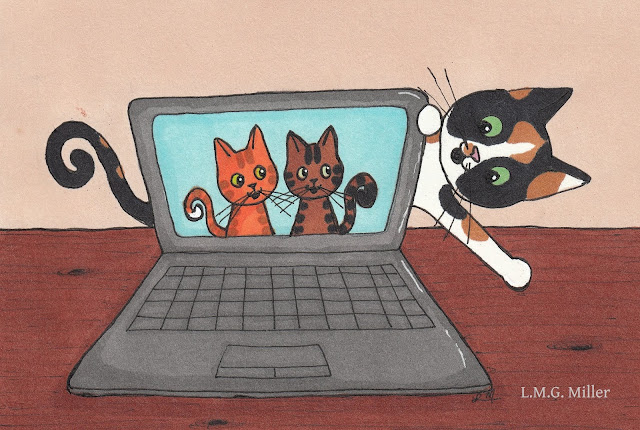 Throughout this A to Z Challenge, we're also sharing furbaby photos that in some way correlate with angel Rosie's daily alphabetical adventures. To go along with today's A to Z topic of Visiting Online Friends, Thimble is taking over her mom's computer to go see what all of her blogging buddies are up to. 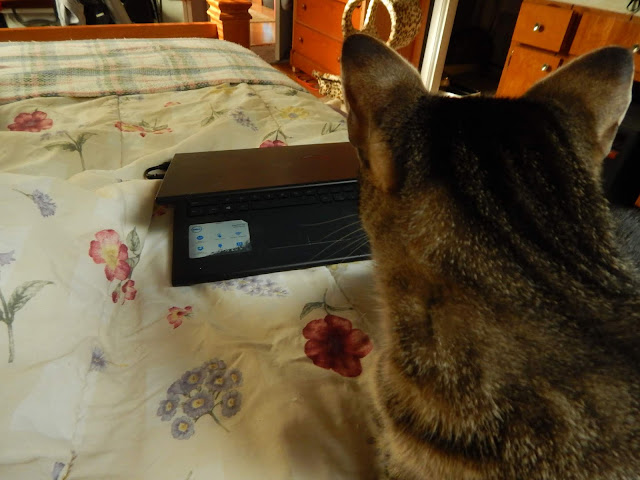 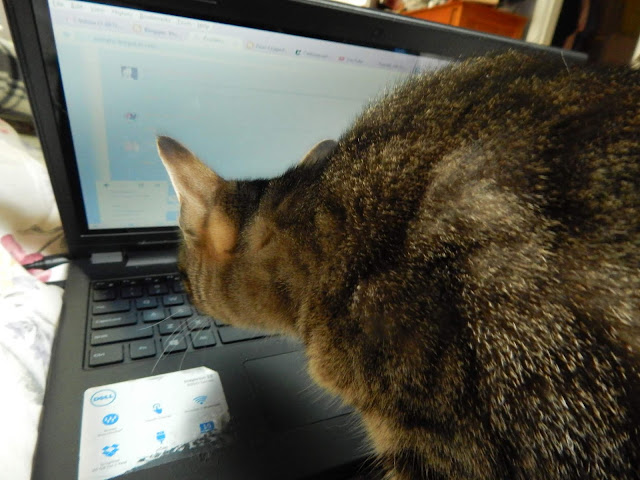 Of course, on this Thankful Thursday, and every day, Thimble and all of us here are so very thankful for all of you friends of ours. This blogging community is filled with so much kindness and compassion, thanks to all of you.

Next up, we did some rhyming for Angel Sammy's Thoroughly Poetic Thursday challenge.

Each week, our host shares a photo prompt to help us get our poetic gears spinning. This is the image for this week:

Though we never once did ballet in our lives, this image still reminded me of my sister and me when we were young. We did have some tutus as part of some of our childhood Halloween costumes, so maybe that's why? Anyway, of course the next thought I had involved our childhood cats, my sweet angel Rosie and her insanely tolerant brother Sammy. After all, these two kitties were our playmates growing up, and they put up with so much, including some occasional games of dress-up.

So, the poem below is very loosely based on, and of course in honor of, my angels Rosie and Sammy. Since today is all about the letter V in the A to Z Challenge, I also felt compelled to incorporate that into the poem. I simply used the names of the cats to make that happen, so that explains the random names for the kitties in this poem.

That's enough rambling for now, I would say. I'll stop talking now and let you read the poem, if you feel so inclined.

Penny and Jenny were their names,
And they were two little girls who loved to play games.
They especially loved to play with their best pals,
Who were known to them as Vinny and Val.

Penny and Jenny never failed to seek out their furry friends,
Playing games with them and dressing them in the finest trends.
Just last week they had turned the girls' bedroom into a castle,
And with a grand dragon Penny, Jenny, Vinny, and Val did battle.

And they would never forget how they spent just yesterday,
Which just so happened to be Penny and Jenny's birthday.
To celebrate, they built a fort in the living room,
And the girls, Vinny, and Val camped out as if under the moon.

Day after day, there was also games of dress-up.
After all, Penny and Jenny had dozens of fun clothes in a tub.
The little girls loved to dress up as cowboys and pirates,
And they thought dressing Vinny and Val the same was a riot.

One day, though, there was no cowboy or pirate attire in sight.
Instead, there were pretty pink tutus, yep, that's right.
Val pranced right on over for her tutu fitting.
Before she knew it, in a tutu she was quite prettily sitting.
Goodness me, please, no, Vinny wanted to groan.
Penny pulled out a purple tutu and told Vinny he could call it his own.

Vinny decided a nap was a far better idea,
And wondered if curling up on the floor would gain him freedom.
Alas, that did not work.
Penny approached with the tutu and a happy smirk.

Before they knew it, Vinny and Val wore tutus near their tails,
All because Penny and Jenny's enthusiasm simply never failed.
Each of the little girls wore a tutu around their own waist,
As well as a great big smile on their pudgy little face.

"Spin! Spin! Spin!" little Jenny cried.
She spun in circles so fast she looked like she might fly.
Never ones to disappoint their little girls,
Vinny and Val set their own furry little bodies atwirl.

Boy oh boy, was that a sight to see,
Two girls and two cats all spinning with a, "Weeeee!"
Together, they spun and twirled and danced all around,
All four of them wearing tutus around their bellies like frilly crowns.

The girls giggled and the cats purred,
As they passed the afternoon in a twirling blur.
They were more than a tad bit dizzy at the end of it all,
When down to the ground for a nap they all did fall.

Truth be told, though, they all enjoyed the dance,
Even Vinny, who fell asleep in his purple tutu while in a sleepy trance.
Cowboys and pirates had now become too much of the same,
And so ballerinas in tutus became the new game.

So, if ever you see two little girls and their kitties in tutus dancing about,
Don't worry or give them a shout.
They're just having themselves a grand ol' time.
And that is the tale of Penny, Jenny, Vinny, and Val in the form of a rhyme.

As we've said over the past couple of weeks, since we share our A to Z Challenge doodles Monday through Saturday, we'll share our illustration for this poem on Sunday. There will be kitties and tutus galore.

Today's tip is a reminder to always have your kitty's, or pup's, proximity in mind when using a computer or other device. As you all certainly know, cats often enjoy sleeping on computer keyboards, sometimes especially when their human's hands are trying to use it. This being said, always be careful to prevent any unwanted internet activity your kitty might cause should the keyboard or other computer features draw their interest. If you see your kitty approaching, or if you need to walk away from your computer, do consider ensuring that you do not leave it on a site that involves shopping, banking, or anything else that could have ill effects if your kitty steps on the keyboard. You can also go as far as to log out of your computer or put it in some sort of sleep mode if you need to walk away and are worried of your kitty's interest in the computer. Another option that can help keep your kitty off of the computer would be to ensure that they have their own cozy area near where you use the computer. This could be a pet bed, a blanket, a box, or anything else along these lines. A cozy sleeping spot of their own can draw your kitty's attention, such as away from the computer. You can also distract them with toys, or use treats to lure and train to them to sit next to you rather than on the computer keyboard. Though our furbabies don't mean anything ill by it, they could still be capable of computer activity with less than desirable effects should they stomp on the computer and the like. There are ways to help prevent this, so simply always be aware of your kitty or pup's proximity when the computer is involved, and consider what solutions might work for you and your kitty or pup.
Posted by The Menagerie Mom at 5:28 AM

We love visiting our online friends, and sometimes we have gotten to meet a few in person! As for pets shopping online. It is not allowed at our house, and Mom makes sure of it by never leaving the computer open and unattended. The kitties will make a mess of things walking on the keyboard.

That's some super visiting fun and a super cute poem too! Thanks for joining the Thankful Thursday Blog Hop!

Great doodle and story/poem! So wish that I had grown up with animals.

I'm all ready for the Friendly Fill-Ins.

Those two little ones are ever so cute.

We sure enjoy visiting you online - wonderful post today!

Great choice for the letter V! One of the very first pictures I took of Mudpie right after she moved in was in front of the laptop with a cat blogger on the screen. I guess it was obvious she was going to settle right in!

Very cute drawing and photo. I loved the poem too. It reminds me of Rylee dressing Joanie up and sometimes Sammy too. And pretty soon her little sister will join her now that is walking. Great tips too. I look forward to your fill-ins tomorrow.

That lovely poem reminded me of my little girls. They used to help the slightly feral kittens become more used to being handled by putting them in doll clothes and playing tea party with them. Worked like a charm.

A man once developed a computer program you could load on your computer that would detect when keys were pressed in such a random manner that it was most likely a cat walking across the keyboard, and it would temporarily shut off input from the keyboard. He was brilliant, i think all computers and tablets need to come with that feature.

I like to take over the computer too sometimes!

I love your online visiting picture. the cats look SO happy to be going to make their virtual visits!

Teddy has never shopped online or walked across my keyboard BUT I don't have the computer on unless I'm sitting here working with it. No doubt he'd order all kinds of great stuff if he could though! We really love your poem this week - it's sweet and fits the photo for the challenge perfectly. Thanks so much for being part of our Thursday fun!!