A Bookworm Sort of Sunday

As we've mentioned before here on our blog, Thimble is our resident librarian. She is known to guard and watch over the books that inhabit our little home library, and she takes this job very seriously. No harm will ever come to her books. 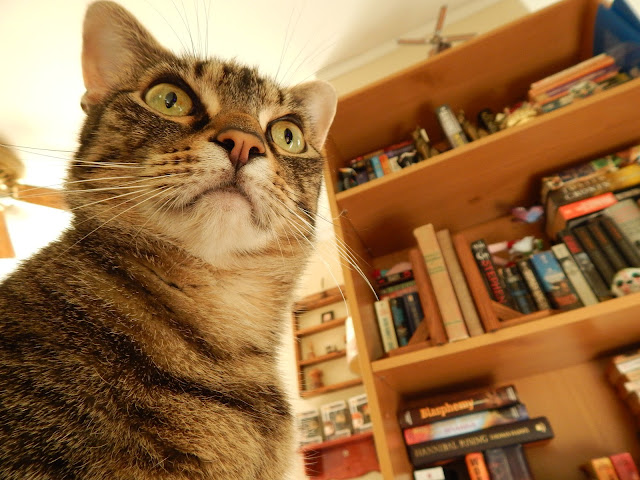 You might want to tiptoe and whisper, just so you know, lest Thimble scold you for disrupting the peace in the library. Like we said, she takes her job very seriously. Thimbles doesn't tolerate any shenanigans around her books. 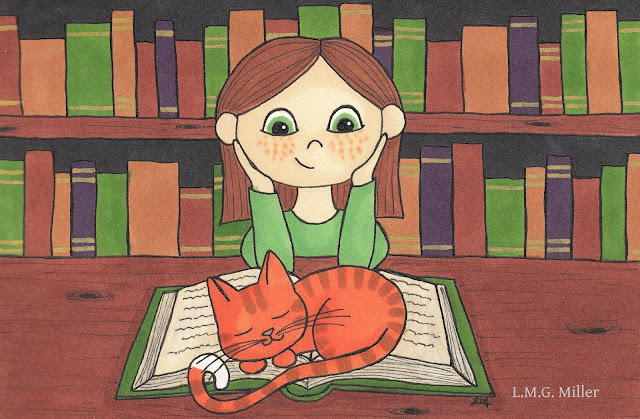 ***
Did you know?
Did you know that classic author Ernest Hemingway shared his home in Key West, FL, with up to 50 cats? Many of these cats were six-toed, which is why polydactyl cats are sometimes called "Hemingway cats". Hemingway's family of polydactyl cats began with a six-toed cat he received from a ship captain. This cat was named Snow White, and many of her descendants still live at Hemingway's home, now called the Ernest Hemingway Home and Museum. It is said that up to 50 cats still live at the Ernest Hemingway Home and Museum, and that roughly half of these cats are polydactyl, or "Hemingway cats".
Posted by The Menagerie Mom at 12:13 AM

We felines do have an affinity for libraries and for writers. I wonder, if a poll was done of cats, how many would have a writer beside them?
Thimble sure looks proud in her selfie, quite the library cat if you ask me.
Purrs
ERin

You guard those books, dear Thimble, and thank you for sharing that very interesting story about Ernest Hemingway. I'd never heard that before.

Not only are you good at guarding the books, Thimble, you look cute while you're doing it. :)

And regarding Mr. Hemingway...why do you think my name is Ernie? ;)

That is a great shot, Thimble.
We like libraries too - only Mummy won't let Us in there without snoopervision, because that's where she keeps the computer and Shimshi likes to chew cables.

Thimble is the cutest librarian ever. I like your drawing too. And yes I did know that about Hemingway. :)

Thimble is on duty! Good girl.

Good job Thimble, guarding those books. Books are just the best and so are cats. You all have a great weekend.

Hiya Thimble, Amber is our Resident Library kitty here in Mewton-Clawson and woe betide anyone who misbehaves in her library! MOL

Lovely selfie and we love the stacks, one can neffur have enough books!

Cats and books belong together! Am betting every book that I've checked-out and returned to the library has some cat hair in between the pages...

We ALL love a good book here. Happy Selfies!

You look just like a little furry librarian, Thimble!

Good job keeping things QUIET in your home library Thimble. I do that at my house too.....the library is always a quiet, cool place and I keep it like that!

You have to keep things quiet in the library Thimble. Good work and a very nice selfie too. That doodle is the best