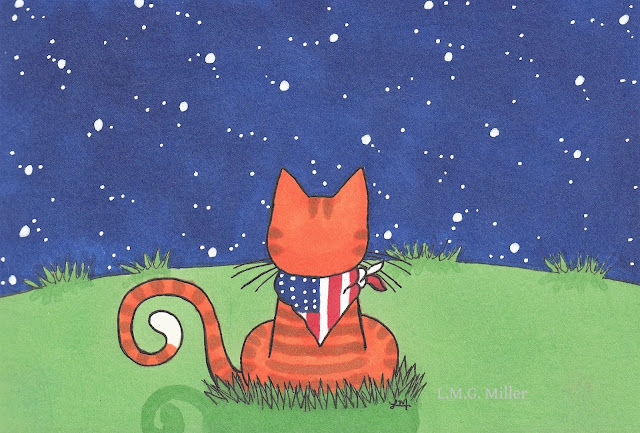 ***
Did you know?
Did you know that a variety of animals have played roles in the armed forces? We've all certainly heard of and respect the many amazing canine war heroes. Did you know, thought, that cats, dolphins, and sea lions, among others, have also played roles in war? Cats have served as mousers and ratters, for example, keeping bases and ships sanitary and safe from rodents. Dolphins have served roles such as detecting underwater mines. The sea lion is another underwater animal who has been trained to serve in the armed forces, such as to detect enemy divers, and even to attach tracking devices to these enemy divers. Animals are heroes in more ways than one, and that includes a great many of them earning the title of war hero.
Posted by The Menagerie Mom at 12:03 AM

We just love this perfect doodle for this day of remembering......

What a beautiful Memorial Day tribute - have a great day all.

Happy Memorial Day; honoring those who've died while in service to their country and its citizens.

I love your patriotic art for today. I have heard of dogs and cats in the military, but never dolphins and sea lions- very interesting. I hope you are having a wonderful holiday. XO

What a purrrfect doodle!

Such a perfect Memorial Day post, sweet friends. We are so grateful for the veterans - human and animal - who gave their all for all of us.

We should also remember all of the cavalry horses and the mules that served for so many years when we didn’t have the vehicles we have now. Yes, many brave people and animals have served.