Hello, friends! It's Thursday, in case you didn't know, and that means we're ready to rhyme. After all, it's the day of the Thoroughly Poetic Thursday challenge, hosted by Angel Sammy

Each week, our host shares a photo prompt to guide us as we get poetic. This week's image is this one here:

I am a huge fan of the Western genre, and so of course I was quite happy to see this image. Obviously, I wanted to aim for scribbling up a Western-esque rhyme. I ended up going for a retelling of one of my favorite Western films, with a couple of plot twists here and there.

It was a fine summer day when the outlaws took over the town.
The townsfolk now wore on their faces nothing but frowns.
Those outlaws were nothing but trouble,
And their presence would surely turn the little town to rubble.

These outlaws were known as The Bandits in local lore,
And they had been around for ten years, maybe more.
They began by pillaging old Mr. Milton's store,
But only after smashing in the windows by the front door.
Next, of course, they stepped into the saloon,
Where they stayed until the rising of the moon.

It was old Mr. Milton who first spoke up,
As he watched the outlaws drink from stolen cups
"You're not welcome here!" he shouted the obvious.
The outlaws scowled, spit, and told him to shut up.

Miss Mack stomped her foot and spoke up next.
"Just you wait until The Magnificent Seven show up!" is what she said.
The boss of The Bandits replied, "And who might that be?
Not a single person, not even seven, scares me."

Stars lit the sky overhead.
The Bandits began demanding free beds.
But before they could turn in for the night,
Something on the horizon came into sight.

"Who's there?" the boss of The Bandits shouted.
"Show yourself, or your regrets will number a thousand!"
The figure in the distance began to draw near.
The light from the saloon revealed it, and The Bandits laughed and jeered.

What stood before them was a little redheaded gal,
Looking quite small in her horse's saddle.
The Bandits continued with their laughter and and jeers,
But the townsfolk just as soon jumped and cheered.

The Bandit's boss man grew quiet and stiff.
The look on his face was nothing if not miffed.
"What kind of disobedience is this?"
He raised his voice further when he said, "All of you, sit!"

Miss Mack said, "I told you you'd be meeting The Magnificent Seven.
I'm sure you'll know what I mean in just a matter of seconds."
It was then that the newly arrived redhead whistled,
After which something shuffled in the nearby thistle.
Then there were shadows here, there, and everywhere,
Moving about as if carried by nothing but the air.

The Bandits seemed to be trying to mask their fear.
Their boss shouted, "What in tarnation is going on here?"
After that, there was rustling and shadows and some yells and screams.
The night was dark and not much could be seen.

Some of the townsfolk thought to spark up a bonfire,
After which the lighting grew much, much brighter.
By the time the flames illuminated the night,
The townsfolk were met with a much improved sight.

The redhead had long since dismounted her steed,
And was now tying knots in a rope from which The Bandits would never break free.
But that, of course, was not all there was to see.
The redhead was but one of The Magnificent Seven,
And the other six were also now visibly present.

The redhead's comrade's trotted, pranced, and jumped here and there.
The boss of The Bandits sneezed in the midst of their whiskers and hair.
"Get away from me, you mangy beasts!" he shouted with a scowl.
The brown tabby of the group of seven let out a hiss and a growl.

The Magnificent Seven had The Bandits well under control,
Especially with the redhead's six comrade's on patrol.
The townsfolk again clapped and cheered,
Now that there was no reason to suffer fear.

Mr. Milton shook the redhead gal's hand.
He said, "Annie, we knew you'd come to the rescue again."
Redheaded Annie smiled and thanked him for the praise.
Then she said, "But it's certainly not just me you have to thank.
I am but one of The Magnificent Seven.
My six comrades, they really deserve the credit.
I say, hip hip hooray for Winky, Tonks, Eddy, Toby, Thimble, and Evan!" 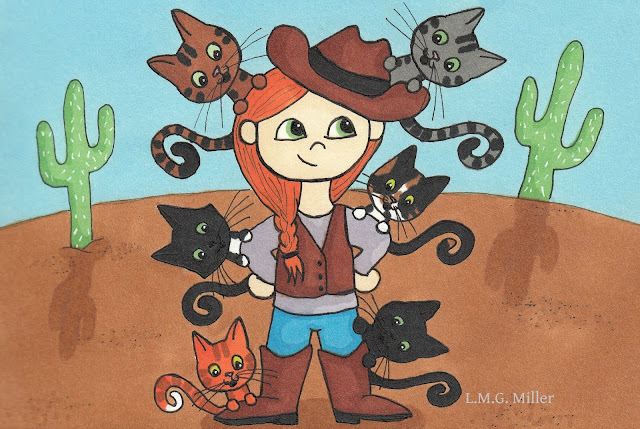 
Now, are you ready for your Thimble fix? Are you? Of course you are. Because Thimble's downright adorable. 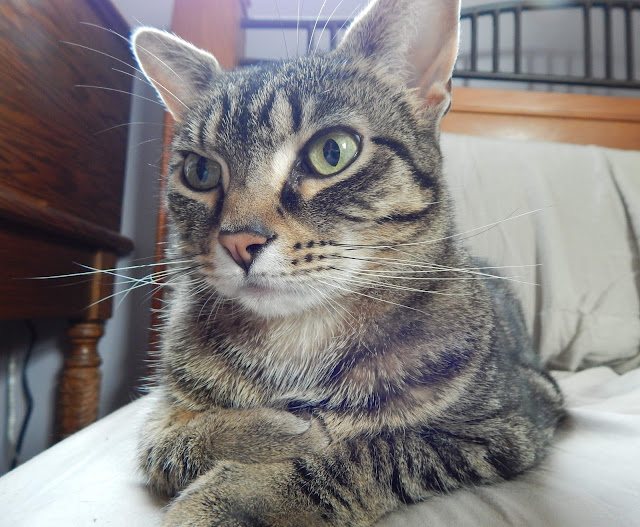 Thimble is notorious for stealing her mom's spot in bed. Her favorite thing to do is steal that prime spot in the bed in the morning, when the sun's shining into the room. After all, what beats a sunny snooze in bed? A warm and cozy bed and sun puddle is Thimble's thankful on this Thankful Thursday.

As always, we are also beyond grateful for the friends we have made in this wonderful blogging community. Thank you all for your friendship!


This is the when we usually give you a daily tip. I was thinking of testing out something new, though. Over the past couple of years, we've gone through many, many tips, and we truly hope those tips are useful. We've gone through so many of the usual, important tips, though, that I feel like we're starting to recycle tips on a regular basis. So, I thought perhaps we'd change things up a bit, at least for a while. So, what do you all think of a daily piece of a trivia instead? A daily "Did you know?" sort of thing? We'll see how this goes, starting with today.

Did you know?
Did you you know that the average house cat can run up to 30 mph? This is nearly as fast as the speed limit on an average road. Imagine that. When you're driving along in your car at the typical speed limit, your cat could reach that speed on just their four little legs.
Posted by The Menagerie Mom at 6:10 AM

That was a purrfect poem for that photo prompt, bravo! Yes, we agree, you are most adorable Thimble! Thanks for joining the Thankful Thursday Blog Hop!

Oh wow....you worked in a lot of my western favorites - The Magnificent Seven and Annie Oakley - I thought I might try to grow up and be just like her one day - good thing I didn't. Carrying a gun is not a good choice these days. Anyway, BEAUTIFUL poem-story again and thanks for playing along with us for the challenge. Love the doodle for this post too!

Nice poem! The cowgirl doodle is darling and Thimble is absolutely ADORABLE.

That is one super poem and we give thanks to those who keep the peace no matter how tall or if they have fur at all.

Hurray to The Magnificent 7! We were so excited guessin about it to the end.

You're such a little doll, Thimble! And I'm such a huge western fan that your poem and art is just purrfect.

That was great!I like the drawing too, so cute. And Thimble is adorable. We have a lot of seat stealers. I like the trivia- I did not know they could run so fast.

Hooray for the Seven! They did a great job, and i like the way you told their story poem.

Trivia is fun, i am looking forward to learning new things, and i knew cats were fast but didn’t know they were that fast.