Just as with every Thursday, we have lots of goodies to get through today. We'll start with the Thoroughly Poetic Thursday challenge, hosted by Angel Sammy.

Every week, our host shares a photo prompt to help us be poets. This image for this week is this one here:

That there image left the poetic options really quite open this week. It is, quite literally, a blank canvas. I thought about what I wanted to do with that, and here's what I came up with:


Young Benji had a dream.
He already knew what he wanted to be.
There was something near and dear to his heart,
And that something was none other than art.

Painting was Benji's one true passion,
And on that passion he planned to take action.
Though he had kept it a secret thus far,
Benji knew he had a talent slightly above par.

One day, Benji's grandparents came over to sup,
And they asked him what he wanted to be when he grew up.
He smiled and did decree,
"To be a painter is the life for me!"
Though they remained polite about it all,
Benji's grandparents implied a painter's life would be quite small.

Benji thought about what his grandparents had said,
And decided he would give them new thoughts for their heads.
Benji ran up the stairs in a flash and a zoom,
And removed his paint, canvas, and easel from his room.

Benji set up his painting supplies by the front door,
And told his grandparents he had something grand for them in store.
He readied his paint and held his paintbrush in hand,
And asked that his audience please sit rather than stand.
After all, he wouldn't want them to be knocked off their feet,
Once they witnessed what they would soon see.

Benji already knew what he would paint,
After first considering all options, from wild to quaint.
His decision was inspired by the words of Leonardo da Vinci,
Who once happened to say, "The smallest feline is a masterpiece."
Benji told his grandparents those exact thoughts,
And told them they would not be disappointed, no they would not.

And so, Benji swished his paintbrush this way and that,
Putting paint on canvas in the shape and color of an orange cat.
He gave it bright eyes and whiskers and an impressively long tail.
It was the next part of the process that made his grandma turn pale.

Benji finished his painting and signed his name,
And after that, nothing was the same.
After all, when Benji painted that final touch,
And when he had put down his paintbrush,
A great meow rang through the room's hush.

No one in the family owned a cat,
And Benji's grandparents looked this way and that.
There was only one cat any of them knew,
And that was the one Benji had just painted at the front of the room.

When his grandparents looked back up at the canvas,
Benji could tell they felt just a tad bit anxious.
That was understandable, truth be told.
After all, a painted cat crawling out of its canvas must be a sight to behold.

Indeed, the painted orange tabby made its way into reality,
Its tail now swishing left and right ever so freely.
Benji gave the cat now on the floor a rub on its chin,
And to his grandparents he said, with a grin,
"Do you still think painting is really such a sin?" 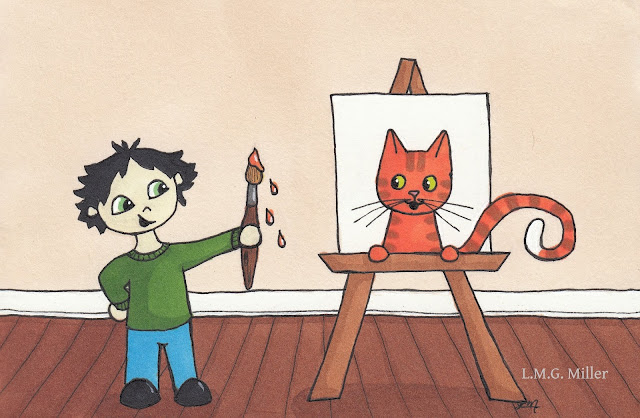 In case you've forgotten since the last time we said it earlier in this post, today is Thursday. In addition to it being Thoroughly Poetic Thursday, it's also Thimble Thursday here on our blog. It's also Thankful Thursday, thanks to Brian of Brian's Home.

Today, Thimble (as well as this momma of hers) is thankful for her library and its books. Thimble is, after all, the resident librarian. 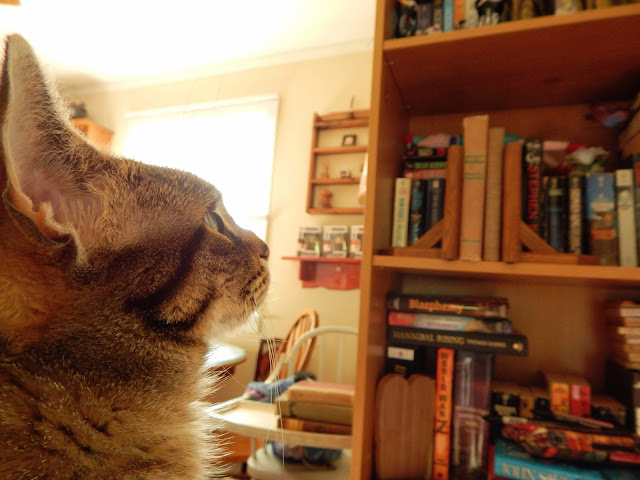 What Thimble is not as thankful for, though, is how her mom has turned that bookshelf into a complete and total disaster area. Sorry, Thimble, I'll get right on that.

As always, all of us here are also so very grateful for all of you, for this entire kind and compassionate community. Thank you all for being you!

Can anyone guess what's next? Yes? No? Maybe so? It's the fill-in statements for tomorrow's Friendly Fill-Ins challenge! Ellen of 15andmeowing came up with the first two, and I came up with the second two.

***
Did you know?
Did you know that a purring cat is not necessarily a happy cat? Cats do indeed purr when they are happy and content, but they also purr when they are ailing, in pain, or stressed. In such cases, it is believed a cat is purring as a means of soothing itself. We're thinking many of you already knew this tidbit of information, but do keep this in mind when considering your cat's health, happiness, and their related behaviors.
Posted by The Menagerie Mom at 12:03 AM

Oh that's a FUN poem today......I had to ask my Mom if maybe that's how she got me - - did she paint me on a canvas? She said no but if that were a possibility, she would go back to painting and paint lots of gingers to keep me company!

Great poem today.Ginger kitties are just the best. WE have four of them here. You all have a super duper day.

Benji has quite a talent, he will indeed be famous.

Thimble is her usual beautiful self, and thanks for the reminder about cats purring to self soothe.

What a great poem! Thimble, you look like you take your library duties seriously beautiful girl.

*standing up and clapping*
Brava! Brava! What an excellent story poem! LURV IT!
And yes, we love books and have a library of our own, but let me tell you, being at the public library is a riot! I spend 45 minutes there yesterday, yakking with the librarians, and I forgot to look for what I'd gone there to get! We talked cats, books, gardens, cats, owls, bats, cats, dogs, local history, walking, cats...

I love the poem and the drawing to go with it. And Thimble is such a cute librarian, I love how she guards the books. I look forward to your fill-ins.
Many of my cats purr when nervous like at the vets.

Your poems tell a story with delight a rhyme and I loved how the kitty on the canvas became alive in the end. Imagine that, the little guy looks like your tabby. ;)

A very fun and creative interpretation of that painting. Hi Thimble