Roughly a week ago, a post of ours starred a certain kitty named Trapper. After recently mentioning that my parents have 12 cats, some of you friends of ours requested to meet this clowder of kitties. Trapper was the first of the 12 that we introduced in this unofficially official series of posts. Now, today, we're introducing you to Trapper's brother, Talon. 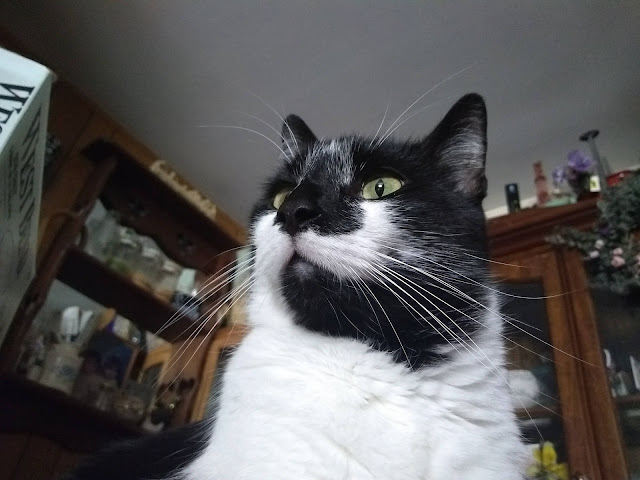 Just like Trapper, Talon is a litter mate of my girl Thimble, as well as of our housemate Toby. We've known these kitties since they were 3 weeks old. We bottle-fed them, and that's actually how Talon got his name. When tiny kitten Talon would see the bottle, he would start grabbing for it and try to pull it to his mouth before anyone else could get a turn. He would never fail to bring out his claws when grabbing for that bottle, and he was known to bloody the hand that fed him. The use of his claws during bottle time earned him the name of Talon. 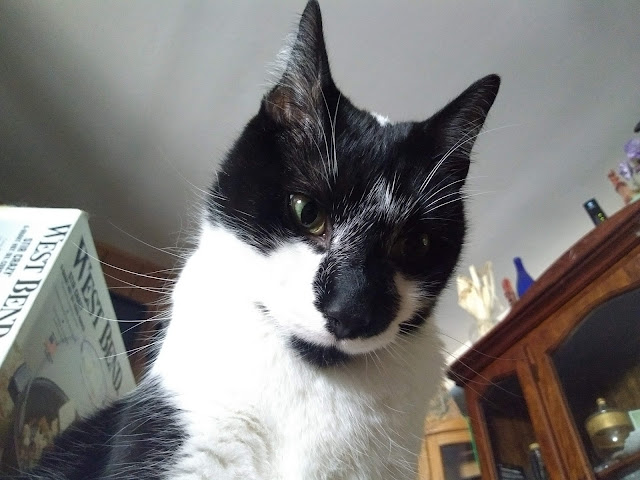 Now 5 years old, Talon is an active and sweet boy who knows no stranger. Quite literally everyone and everything is his friend. It's a joke in the family that if a robber ever broke into my parents' home, Talon would greet them with open arms, and then show them to whatever they wanted like a proper host.

Though Talon is indeed exceedingly friendly and social with every single soul he meets, I'll admit that he can be a jealous little fella. If you give another cat too much attention, and if he thinks you're thereby ignoring him, Talon will use his namesake claws to drag your hand to him instead. Sometimes he'll also use his teeth to let you know that he needs 110% of your attention. He's also known to slap around whatever kitty you're petting instead of him.

Really, though, Talon is one awesome mancat. He's sugary sweet with a little sass on the side, and that's purrfectly fine with me. He loves everyone and judges no one, and I could learn a lot from him.


***
Halloween Doodle of the Day 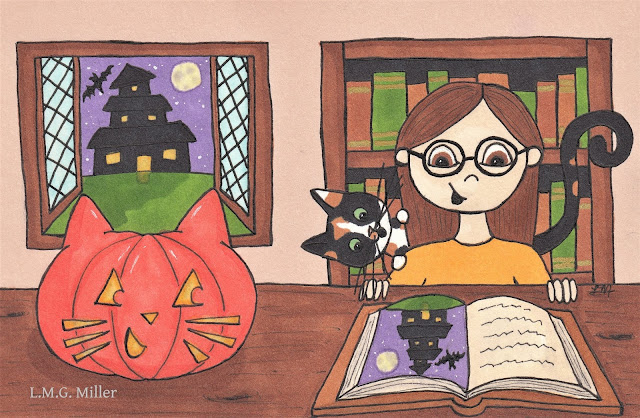 Wouldn't it be frightfully fun to read a haunted tale by the light of a cat-o'-lantern?

We mentioned yesterday considering getting your kitty or pup a festive new toy as a Halloween treat and distraction, of course as long as said toy is safe for your furbaby to use. Similarly, you can typically find your furbaby some Halloween treats of the edible kind. Some companies come out with specialty holiday treats, for example. In addition, many pet stores will sell cookies, at least those for pups, and oftentimes such cookies will include those designed and decorated for certain holidays, including Halloween.

You don't just have to go for store-bought goodies in order to give your kitty or pup something festive and tasty on days like Halloween, though. There are a great many treat recipes available online, including those festively made with pumpkin or those simply cut into festive shapes. I've even seen people go for simple yet effective holiday treats that merely include cutting a wedge of paté canned food into a festive shape, such as a pumpkin.

Many of the options for festive treats are aimed toward aesthetics that humans rather than furbabies will appreciate, but as long as the ingredients are safe, your kitty or pup can enjoy a tasty Halloween treat just as well. So, check labels or recipe ingredients to ensure any treats you select are safe for your individual furbaby, and then let them chow down on a festive Halloween treat on Halloween night. Of course, if your furbaby has any ailments or you have any concerns about feeding your kitty or pup certain treats, do consult your veterinarian.
Posted by The Menagerie Mom at 6:53 AM

Talon you are gawjus! Good advice on the toys and treats, thanks!

Talon is a handsome mancat, and he sounds just like Paddy O'Malley...a friend to all, but don't look at another cat!

Talon is a cutie. Great drawing and excellent tips too.

Talon, you're a handsome mancat ! Purrs

"It's a joke in the family that if a robber ever broke into my parents' home, Talon would greet them with open arms, and then show them to whatever they wanted like a proper host." Too funny! Mudpie is much the same way. What a handsome boy.

We've had bottle babies that went berserk like that. Sometimes you have to scruff them to get the bottle in the mouth, then let go and let them latch on. It's kind of funny but not when they draw blood.