As always, our host shared a photo prompt to help us get poetic. This week's prompt is this lovely image here:

This cozy campsite looks so inviting to me. I've always felt drawn to the forest, and I really think I'd enjoy living a calm and quiet life amongst the trees. I decided to use that thought for my poem this week, but of course with a couple Halloween vibes thrown in there.

The Witch of the Woods


The cauldron boiled and the cauldron bubbled.
The witch was having all shades of potion trouble.
This brew was supposed to neither boil nor bubble.
She frowned as she found herself with trouble doubled.

Outside the witch's window car horns honked and squawked.
Outside the window people and more people walked and talked.
The witch was living an urban sort of life,
And so far it had caused her nothing but strife.

The witch found that city life allowed her very little focus.
The same seemed to be felt by her feline familiars Hocus and Pocus.
They all three found the situation really quite bogus,
Even though feline familiars Toil and Trouble still managed mischief quite focused.

On her thirteenth attempt to stir up a new lucky potion,
The witch threw her hands in the air in an exasperated motion.
"I can't take this anymore!" she said with a stomp of her foot.
"All the ruckus outside has ruined my potion again. Just look!"

Hocus, Pocus, Toil, and Trouble all pranced right on over,
Their whiskers and tails long enough to touch their shoulders.
They all nodded in agreement that the potion was a bust.
"I have to get out of here," the witch said. "I must!"

Hocus and Pocus made their way to the corner and mewed.
Toil and Trouble climbed until something hit the floor all askew.
The witch turned to the corner where her cats were causing a scene.
Alas! The felines had found a solution far from obscene.
The witch quite liked what was splayed upon the floor at their furry feet.
After all, it was the tent she used when vacationing and camping.

And so, just like that, the witch packed up all her camping gear.
"Come now, my kitties," she said. "Let's get out of here."
The witch and her felines waltzed right out the door,
Immediately cringing at the city's hubbub and roars.

They walked some of the trip and flew even more,
Until they all realized they were ready to settle down for a snore.
Luckily, their destination was now just below.
It was a beautiful forest filled with squirrels and crows.

The witch stopped in the middle of the forest and put down her pack.
Both her and the four cats yawned and stretched their backs
It was a cool, crisp autumn night,
And they happily slept by the warmth of campfire light.

When the sun and birds announced the beginning of the next day,
The witch and her cats craved their breakfast of curds and whey.
They emerged from their tent with smiles and purrs.
They were happy to have left behind that city life so absurd.
The forest was lively yet quiet and calm,
And with it they had not even a single qualm.

With breakfast eaten and the sun shining overhead,
The witch was more than happy to face the day ahead.
She opened her pack and reached a hand inside.
There were a great many things the pack did hide.
From it the witch withdrew books of spells and so much more,
As well as cauldrons that numbered at least four.

The witch gave new life to the campfire outside of the tent,
And atop it she placed her favorite cauldron covered in dents.
She looked around the forest, and with her ears she listened.
This time, there were no cars or folk to bring her potion plans to an unfortunate end.

Hocus, Pocus, Toil, and Trouble nudged a spell book into her hands.
"Thank you, my dears," the witch said to her feline friends.
She opened the book with a smile on her face.
She was certain she could perfect any potion in that beautifully forested place.

That day, the witch brewed and bottled up potions galore.
She brewed more than she'd managed during her time in the city, and more.
She could not even slightly imagine leaving that forest.
After all, it was calm and quiet, with only the birds to sing a chorus.
It was the only place her potions brewed so well and good.
Perhaps that's why she that day became the Witch of the Woods. 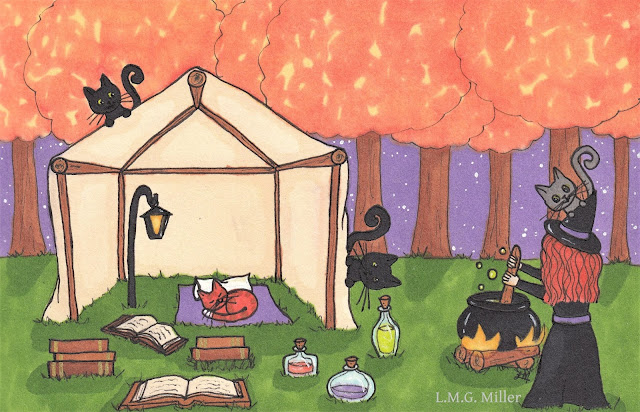 Next up is of course Thimble and her Thankfuls. This girl has a lot for which to be grateful, but today she's sharing one fuzzy bit of gratitude in particular. 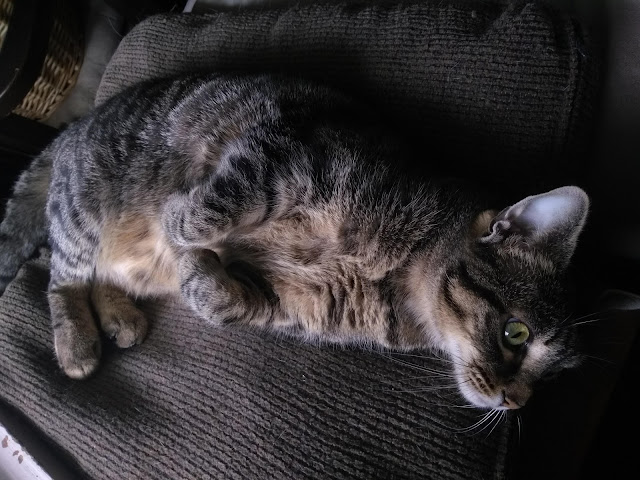 Thimble is indeed grateful for that fuzzy tummy of hers. After all, a simple flash of that tummy will get Thimble whatever she desires. Needless to say, this here mom of Thimble's is also happy to have that fuzzy tummy in her life.

And now, of course, we're sharing the fill-in statements for tomorrow's Friendly Fill-Ins challenge. Ellen of 15andmeowing is the mastermind behind the first two, be and I came up with the second two.

Bats are not always found outside, though. Bats can sometimes find their way into buildings, including attics or other areas of homes. If you live in a house or apartment where bats are discovered, keep your furbaby away (and also, of course, try to keep yourself safe), and certainly do not allow your furbaby to chase or play with any bats. A bat can bite quickly and without notice, and rabies could potentially be transferred that quickly if the bat at hand is infected with it. If a bat is unable to be safely escorted out through a window, or in another safe means that does not require direct handling, then contact animal control or another relevant organization for the safe removal of bats.
Posted by The Menagerie Mom at 12:08 AM

Such a refreshing poetry.. You are very skilled

We always love your drawings, they are so cute! Bats are good for many things, but they are also disease loaded. Mom remembers as a girl one night they had a bat in the house. Her dad grabbed dirty laundry out of the basket and tried to hit the bat with it and eventually caught it and released it outside.

I love the poem and it has a witch in it! The doodle matches the theme - and as always good Halloween advice!

You are a very talented poet!
And yeah, when my kitty rolls over and flashes her tummy at me I can't resist her either! Cute tummy pic Thimble :)

Got to admit that Thimble's belly just makes me SQUEE!

What a PERFECT doodle for your poem AND the photo this week! Love the story and the Halloween touches - we're SOOOOOOOO in the mood but your poem takes the cake.

What a wonderful and imaginative poem...well done. We had a bat in the house once in our old house. It came down the chimney. We had two dogs then. I sat outside until Tom could get home and catch it. If I saw Thimble in that pose, I would give her anything she wanted. XOCK, angel Lily Olivia, Mauricio, Misty May, Giulietta, angel Fiona, Astrid, Lisbeth, Calista Jo, Cooper Murphy and Sawyer

Looks like gourmet camping to me! And Thimble is a beautiful kitty!

That fuzzy tummy is irresistible!!! So many of your poems could be envisioned as a movie!

Your poems never disappoint. That was great. And I love the drawing too. A tent with a cat, now that would tempt me to camp. Thimble is adorable, great shot. And excellent tips too.