Tonks Tuesday with a Halloween Giveaway!

My little calico Tonks informed me that she hasn't gotten to show off her adorable face recently. I realized she is correct, and of course we had to remedy that. So, here you go. 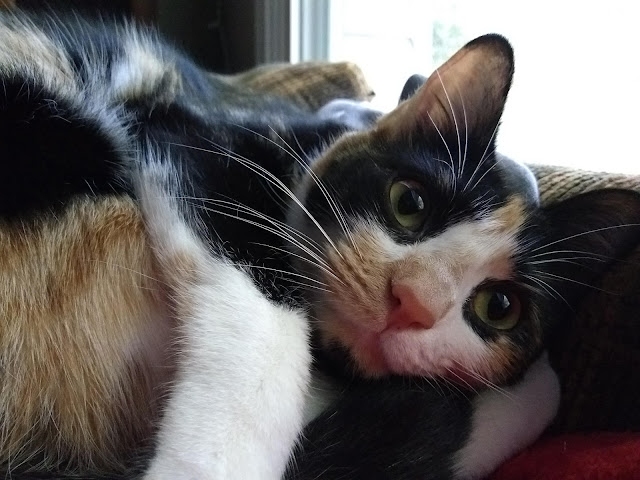 Tonks is extra excited, because today she gets to share our Halloween giveaway with you all. 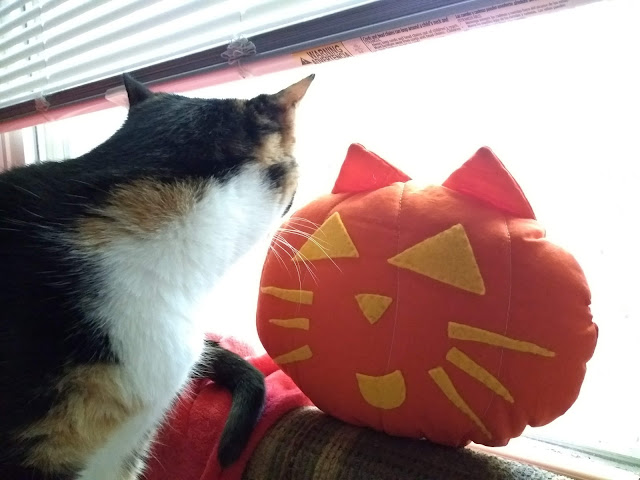 Whereas this here human enjoys scribbling things in a sketchbook, my mom (the kitties' and pup's grandma) enjoys sitting down at her sewing machine and stitching together all sorts of fun things. I recently asked her if she could look at one of my cat-o'-lantern doodles and then create for me a similar pillow in her own sewing style. She of course agreed, because she's awesome. What's more, she created two cat-o'-lantern pillows, so that we could give one away here on our blog! 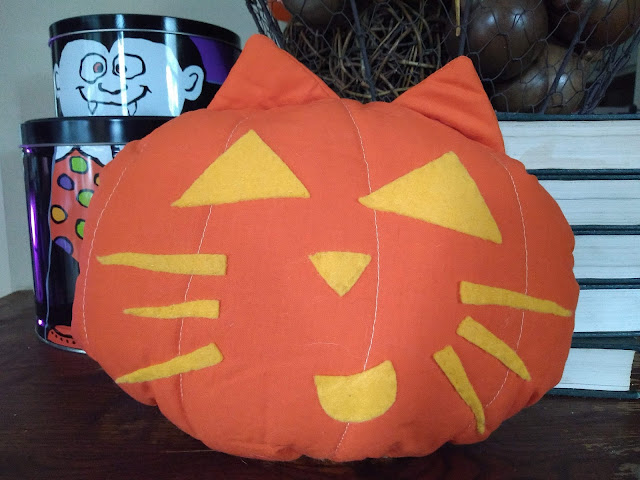 That there little cat-o'-lantern pillow, created by none other than my mom, otherwise known as grandma to the furbabies around here, is indeed up for grabs in our Halloween giveaway. This giveaway will also include some frightfully festive catnip toys. I set out to photograph those as well, but Thimble chased me down and tried to steal the toys roughly a gazillion times before I could even get a photo of them. I ultimately gave up and decided the toys were meant to be a surprise to whoever wins the giveaway. Also in the giveaway will be a little something I'm throwing together at my art desk, but this will also be a bit of a surprise to the winner, primarily because I haven't put the final touches on it yet. The main attraction of the giveaway is the little cat-o'-lantern pillow my mom crafted, though, so I feel like getting a photo of that was a decent enough accomplishment for this post.

To enter our Halloween giveaway, simply comment on this post. You have until 6 pm, Central Time in the US, on this upcoming Friday, October 25. I will announce the winner in our post on Saturday, and I'll ship it all out first thing next week. I didn't really mean to post this giveaway so late in October, but I obviously failed to run the giveaway earlier in the month. Better late than never, though, right?

Tomorrow is my parents' wedding anniversary, and it has become a tradition that I bake them an apple pie to celebrate the occasion. Since I'll be baking that pie tonight, I felt compelled to share a flashback pie doodle today. Though an apple pie and a pumpkin pie are certainly not one in the same, I still felt this spookishly strange doodle from last year would suffice. 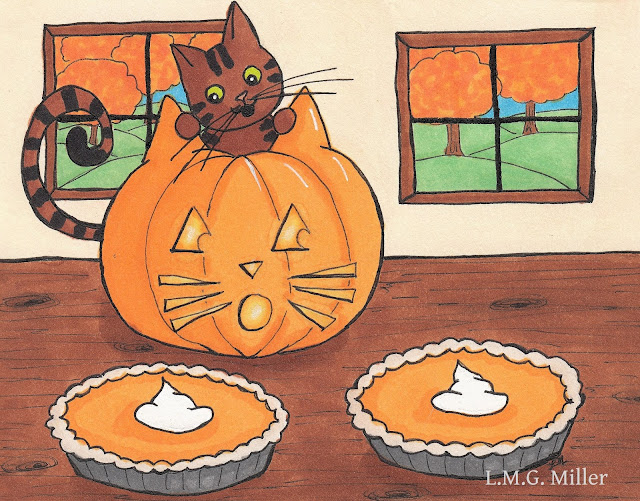 I actually scribbled up that there doodle last November, when I was still in the mood for Halloween, but when Thanksgiving was just around the corner. I'm assuming I'll have some similar doodles to share when November rolls around this year. It's so hard to say goodbye to Halloween and to those cat-o'-lanterns.

Yesterday we mentioned keeping your kitty or pup in a safe area of the home, away from the door, in order to avoid any escapes out the front door during Halloween night festivities. Today, we're offering some additional methods you might be able to use to help keep a furbaby as safe, happy, and comfortable as possible on Halloween night. These tips are the most beneficial to furbabies who are scared of the doorbell, knocks at the door, and any other noises and happenings that Halloween might bring with it.

To begin, you can help make a nervous or uncertain furbaby feel more secure during the hustle and bustle of trick-or-treaters by closing windows and drawing blinds or curtains, to mask some of the sights and sounds of the spooky festivities. In addition, you can play music or turn on the TV or a movie to help further drown out sounds that might alarm a kitty or pup. Some furbabies might even be distracted by some treats, or by a play session with you or an interactive toy. In some cases, a cat or dog with higher levels of anxiety might benefit from the use of calming products like a pheromone spray or diffuser, or even a Thundershirt or similar makeshift item to make them feel secure. Or, some cats and dogs would simply do well to have access to a safe hiding place in a safe area of the home, where they can ride out Halloween night. The important thing is to consider your particular kitty or pup's personality and behaviors, and then determine what distractions or other techniques might best help them feel safe and secure on Halloween night.
Posted by The Menagerie Mom at 12:00 AM

And how adorable and sweet Tonks is! I couldn't say no to that face!

Tonks, your mom is SO talented! And you are so beautiful!

I enjoy your blog. Your Mom is cool...what a great pillow!

Your Mom captured that Halloween doodle of yours PERFECTLY. It's got the personality in every stitch. She did a great job and what a totally cool giveaway this is! It's nice to see Tonks too - she needs more "air time" on the blog............LOL

Hugs, Teddy and Mom Pam too

Tonks is so darn cute. Your mom did an amazing job on the pumpkin. That is a great prize. I like the drawing too. Happy Anniversary to your folks- they got married at the best time of the year. :) We did too, our anniversary is Thursday.Excellent tips too.

Tonks, that pillow is almost as cute as you....almost.

So good to see you Tonks!!! I can see where you get your creative touch...your mom's pillow is adorable! What a fun giveaway. Your doodle...YUM!!!

That pillow is adorable! It's *almost* as adorable as you, Tonks. :)

It's never to late to give away such a cute pillow! Have a a fun day sewing another fun project! Cheers!

Tonks, you are a lovely helper, showing off the pillow.

That doodle is funny!

I personally love the cat-o'-lantern pillow but I'm afraid it might scare our five fur-babies. Our newest and "Tiny"ish fur-baby may love it the most - he carries his "'baby' toy" all over our house.