Thursdays are for rhyming. Really, we're not lying. Do these rhymes have you crying? If so, you best be hiding. Okay, what we're trying to say is that it's time for Angel Sammy's Thoroughly Poetic Thursday challenge.

Each week, our host shares a photo prompt to guide us as we get poetic. This week's prompt is this image here:

I've always been very intrigued by Native American culture. It's so rich and historic. That being said, I certainly wish I knew more about it than I currently do, and I wish I could have managed far more research for this week's image and corresponding poem. I also made the whole scenario more difficult for myself, given that I am still determined to make all of October's poems relate to Halloween. What is wrong with me.

So, what I ended up doing was brainstorming some of the aspects of Native American culture that I am most intrigued by. These include the concept of animal guides, or spirit animals, as well as the often unique and meaningful Native American names. On top of that, I tried to brainstorm how to incorporate these aspects with Halloween, which really has nothing to do with Native American culture. Furthermore, though I am admittedly far more ignorant than I'd like to be when it comes to Native American culture, I really wanted to remain respectful to the culture. I hope I didn't totally fail, especially since I definitely took some artistic liberties.

See the World from Different Eyes

Maura lived in a little house on the prairie,
And her favorite day of the year was the one deemed most scary.
In case you couldn't or didn't guess,
Maura awaited Halloween, and that's no jest.

Fortunately, Maura no longer had to wait for her favorite day of the year.
After all, it was now finally that day of tricks, treats, and fear.
As the sun began to sink beneath the horizon,
Maura put together her costume of a lion.
She grabbed a bucket that yearned for candy,
And then she was out the door in a dandy.

Maura skipped through her prairie of a home,
Beneath the stars and the moon of the overhead dome.
Frightful festivities would be found in town,
And so Maura hurried that way with the opposite of a frown.

Maura slowed as she passed the nearby pumpkin patch,
Because the squash it contained were a wonderfully festive batch.
She only intended to admire the pumpkins on her way by,
But then she suddenly stopped in the blink of an eye.

Standing just outside the pumpkin patch was a woman Maura did not know.
Finding strangers in that familiar area was quite unknown, though.
The woman turned when she heard Maura approach.
She wore long black hair, brown attire, and was that a ghost?

What a strange sight Maura did now see.
The strange woman seemed accompanied by a ghost indeed.
At her side was a regular ol' cat of black,
But above her head hovered a cat far more translucent than that.

Unsure what else to say or do,
Maura cleared her throat and presumed,
"Excuse me, ma'am, but is that your costume?
That's what you're dressing as for Halloween?
What are you supposed to be?"
The woman smiled and said, "No costume here. Just me."

The woman's cat of black meowed and mewed,
Which to Maura was really nothing new.
But then the other ghostly cat let out a whisper,
A meow that emitted from a face with ghostly whiskers.

"Don't let him scare you," the stranger of a woman said.
She put out a hand and petted the cat that may or may not have been dead.
"What's your name?" the woman then asked.
Maura gave her answer as she continued to stare at the ghost of a cat.
"It's a pleasure to meet you, Maura.
As for me, my name is Miakoda.
You can also call me Power of the Moon,
But Mia is just as fine, too."

Maura offered the best greeting she could muster,
But then she could not help but stutter,
"So you're not wearing a costume?
Why is there a ghost with you?"

Miakoda let out a little laugh.
She said, "My apologies for not explaining that.
These two friends of mine are my helpers."
Maura wasn't sure she fully understood that answer any better.

Truly wishing to clarify,
Maura asked, "Is that cat dead and the other alive?"
Miakoda patted her cats and said, "My feline friends are my guides.
One can guide me in the physical world,
While the other is a guide of a more spiritual sort."

Maura thought those words both did and did not make sense.
Perhaps Miakoda sensed that Maura was still feeling a bit dense,
Because the woman said, "We're not so different, you and I.
We simply see the world from different eyes."

Maura was slowly starting to understand Miakoda's meaning,
And she hoped that understanding would not be fleeting.
"So your cats may be different," Maura said, "but they're both your guides."
She added, "And you may dress different than me, but it's not a guise."

Miakoda nodded and smiled as both cats purred.
She said, "I'm glad you don't find it all absurd.
On another note, though I don't dress up for Halloween,
That doesn't mean I'm not keen on all that delectable candy."

Maura and Miakoda then proceeded together to town.
Neither of them wore anything even close to a frown.
And so there you have it, simple as that.
The town's festivities were joined by two different ladies and two different cats. 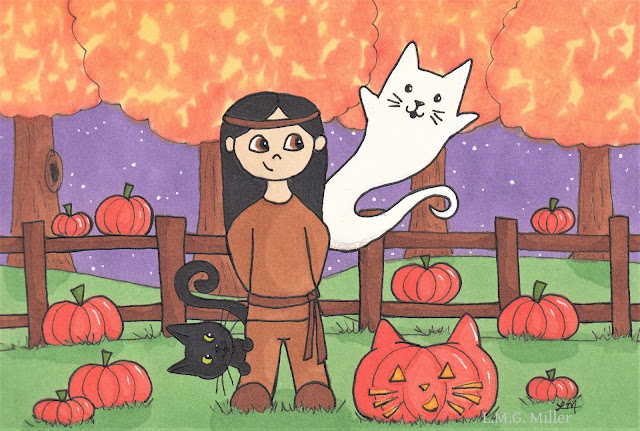 
As always, we're now moving on to Thimble and her Thankfuls. 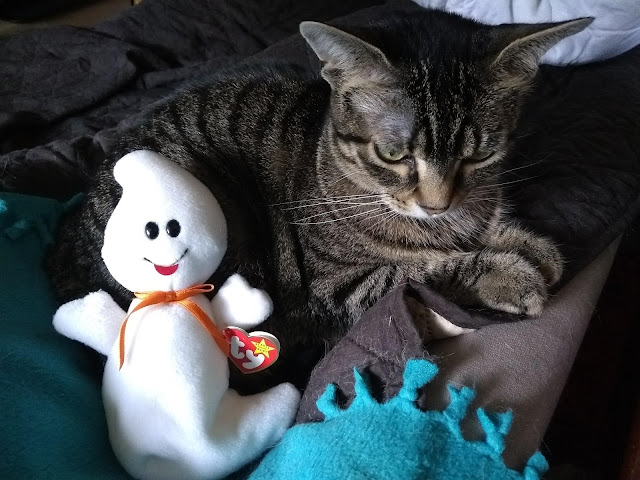 Today, Thimble is grateful that we're not haunted by anything more than an obnoxious little doll. Or...are we? 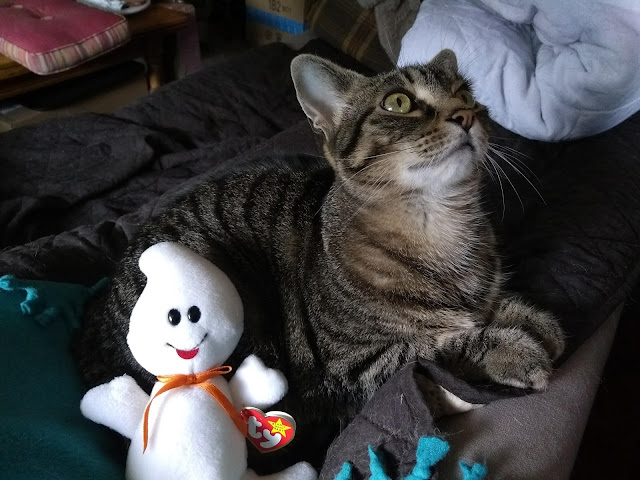 Yikes. What's up there, Thimble? Is that spooky, stuffed little fella the least of our worries?

Well, haunted house or not, at least we have beautiful autumn weather and wonderful blogging friends to be thankful for!

We're on the 10th day of our 31 days of Halloween tips. Now, we simply couldn't go this entire Halloween month without mentioning none other than pumpkins! We did very recently mention pumpkins and their benefits and dangers here on our blog, but we'll go ahead and delve a little deeper today. As most of you likely already know, pumpkin can make for a healthy treat for a kitty or pup. Plain, cooked pumpkin can be an excellent source of fiber. This can help to keep the bowels regular, and so could be something to keep in mind for those furbabies with irregular bowel movements. Pumpkin and the fiber it provides can also help move hairballs more easily through those kitty intestinal tracts. Fiber, such as that from pumpkin, can also help a kitty or pup feel full for longer, which means that it can also potentially aid in weight loss. All of these benefits are also on top of the fact that pumpkin is also high in a variety of beneficial nutrients, such as vitamin A and vitamin C.

That all being said, do of course ensure that you only feed your furbaby cooked pumpkin of the plain variety. You can feed your furbaby pumpkin puree from a can, of course ensuring that it contains no spices or other added ingredients. You can also cook up your own pumpkin and feed it to your kitty or pup as a treat. What's more, these days, there are many types of dry and moist foods, as well as treats, that contain pumpkin as an ingredient. These such foods might assist certain furbabies with bowel regularity or weight loss. Of course, if you have any questions or concerns regarding your furbaby's diet and digestion, discuss options such as pumpkin with your veterinarian.
Posted by The Menagerie Mom at 5:12 AM

We love your cute little ghost, Thimble! Hope your home is not haunted!

Thimble, you are too cute today - I love your ghost and hope for the best on the haunting!

I've also been intrigued by Native American culture though I don't know as much about it myself either.

That was a wonderfully cute little poem/story and cute art :)

That really was quite a wonderful poem! Hey Thimble, you are your little pal sure look cute. Thanks for joining the Thankful Thursday Blog Hop!

What a lovely poem. You do these so very well.

Thimble is a good looking kitty.

Thank you for co-hosting the Friendly Fill-ins. I'm all ready for tomorrow.

Uh oh...what do you see, Thimble??? Amazing poem as always.

I love your poem and the drawing too. You did a great job twisting it into Halloween. Thimble is so cute, I love how she is sitting so proper with her little paws together. I look forward to your fill-in answers tomorrow- especially the spooky one :) XO

What a truly wonderful story to tell with the photo prompt this week! We love Indian culture and thought it would be fun to use this photo for poetry day - you "knocked it out of the park" with your story!!

Your story poem is lovely.