After recently sharing some photos of a couple of my parents' cats, and indicating that they have 12 such felines, some of you friends of ours indicated you'd like to see of all of my parents' cats here on our blog. I figured, sure, why not. That's why today we have yet more guest selfies for you, and these star a boy named Trapper. 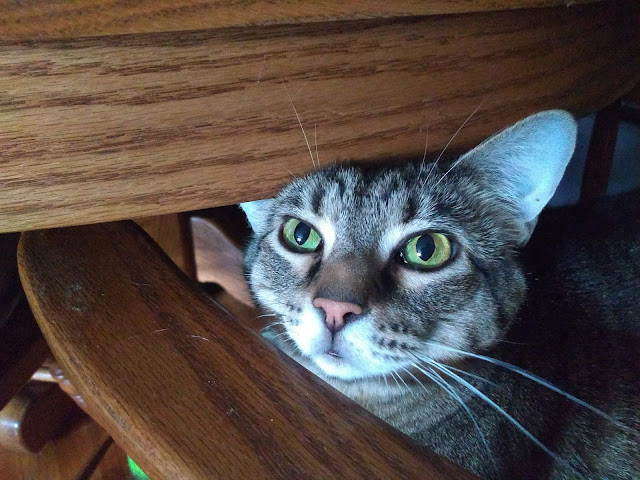 Those of you have visited us at certain points in the past will have met Trapper before. He is one of my girl Thimble's litter mates. The other of their siblings are Toby, who is my sister's cat and lives with us, and Talon, who also lives with my parents and who you'll see soon in the future. Today, though, it's all about Trapper. 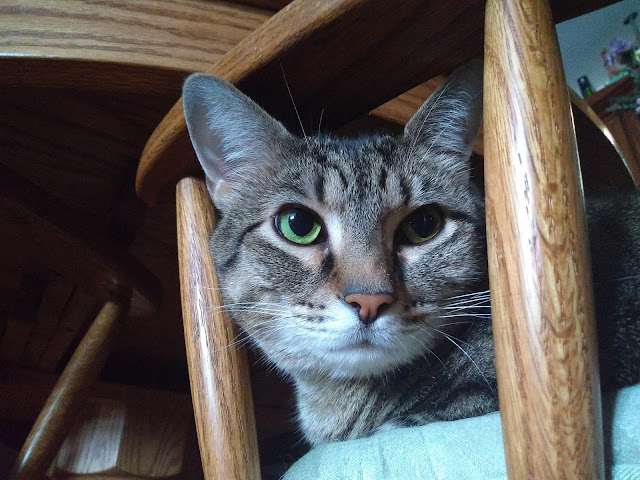 Like Thimble and this entire litter, Trapper made his way into the family when he was about 3 weeks old. This litter of little kitties was found by my grandma's neighbor, my grandma took them in, she brought them to us with the assumption we'd find them good homes, and none of them ever left the family.

Want to know a fun fact? Trapper got his name sort of as a joke. Even way back at 3 weeks of age, Trapper was one handsome little dude, and his adorable face won my dad over in about half a second. Trapper was the first of the litter who earned a name, and, as I just mentioned, my mom chose his name as a jest. She said that he and his handsome face trapped us into keeping a litter of 4 kittens because he won my dad over so quickly. Hence, Trapper. In the end, obviously, my parents kept 2 of the 4 kittens, and my sister and I each took home 1 of the litter. 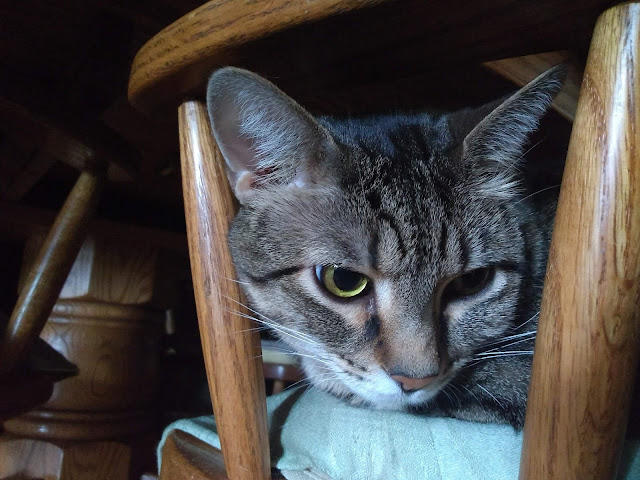 Trapper is by far the biggest cat from his litter. He weighs in at right around 21 lbs. That's exactly twice the size of his sister, my girl Thimble. The next biggest of the litter after Trapper is Toby, who weighs in at 16 lbs.

Trapper is my buddy. Then again, he's everybody's buddy. He is not a shy boy, and he will come out and investigate anyone who visits my parents' house. Trapper also really likes pup Astrid, but if I'm being honest, he also sometimes chases her and kind of freaks her out. When all 4 kitties of this litter first found their way into the family, they all took to Astrid immediately and would follow her around. They all still do this to some degree, but Trapper is probably the most ornery with Astrid and sometimes simply likes to make her run from him.

So there you have it. That's Trapper, one of my parents' 12 kitties. He's a handsome boy, and he's my little (more like really big) buddy. You'll be meeting all of my parents' kitties over the next couple weeks.

***
Halloween Doodle of the Day 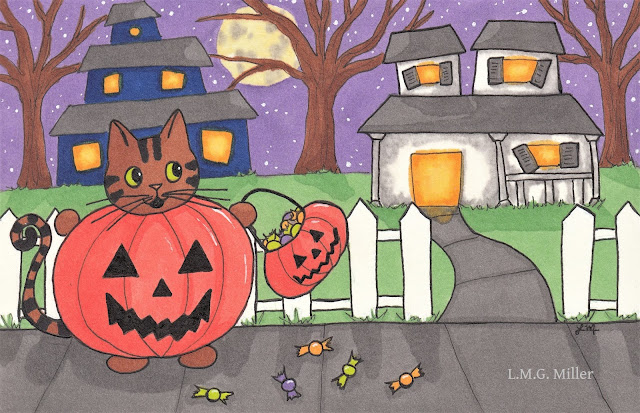 Just yesterday, we gave the tip to avoid walking your pup or kitty on Halloween during trick-or-treat hours, in order to avoid the increased foot and road traffic that could lead to dangerous situations. On the other hand, today's tip involves some ideas for staying safe should you and your furbaby find yourselves out and about on Halloween night. If you're out on a walk on Halloween night, or any night for that matter, be sure to take a flashlight, as well your cell phone in case of emergency. At the same time, though, don't be distracted by using your phone instead of observing your surroundings. What's more, ensure that your furbaby's leash and collar include reflectors, and that you yourself are wearing reflectors in some way, so that both of you can remain seen and safe.

Another important factor if walking with your furbaby on Halloween night is to know where it might be safest to walk. Obviously, dark alleys are not the way to go, but you also want to ensure that you don't end up with a scared furbaby on the busiest trick-or-treating street. So, if you must head out for a stroll with your furbaby during trick-or-treat hours, think ahead about what route you should take. As we previously hinted, it should be a safe, well-lit area, but also one that won't be hustling and bustling with trick-or-treaters. This is especially important if the pup or kitty being walked is skittish or aggressive in any way. All in all, think ahead and make plans for where you can most safely take a walk with your furbaby should you need to go out on Halloween night.

Also, one last note we want to make is to watch your furbaby closely when walking them on Halloween, as well as on the following days. Trick-or-treaters might leave behind candy, candy wrappers, parts of costumes, or other unsafe goods. So, do keep an eye on that furbaby and make sure nothing unsafe makes it to their mouth when walking during the Halloween season, and year round.
Posted by The Menagerie Mom at 2:19 AM

Thanks for sharing Trapper with us today. He sure is a handsome guy, and we can see why he won hearts and found a loving home.
Purrs
ERin

We love the story about how Trapper got his name. 21 lbs.? He's a really big and handsome kitty!

... and he almost looks as tho he's "trapped" in that chair! Great story, great name, great photos of an adorable kitty!

What a handsome boy, I'm so glad that little family stayed with the big family!

I love the Halloween doodle and your tips are spot on as usual, have a wonderful week!

Trapper is most handsome and has beautiful eyes. He's also a BIG GUY like me - I'm always happy to know that I'm not the only "OVER TWENTY POUNDER" out there!

Trapper is a handsome boy. I like the drawing too. And excellent tips, as always.

Trapper is a handsome boy ! Purrs

Hello Trapper you really do a nice Selfie.

Trapper sure is handsome...and we love how he got his name. :)

What a handsome big boy!!!

Trapper is very handsome, and he sounds like he's a lot like The PO'M, with matching tabby stripes, AND attitude! Thank your parents for sharing their kitties with us...we are such voyeurs...

What a cool story about Trapper and his name!