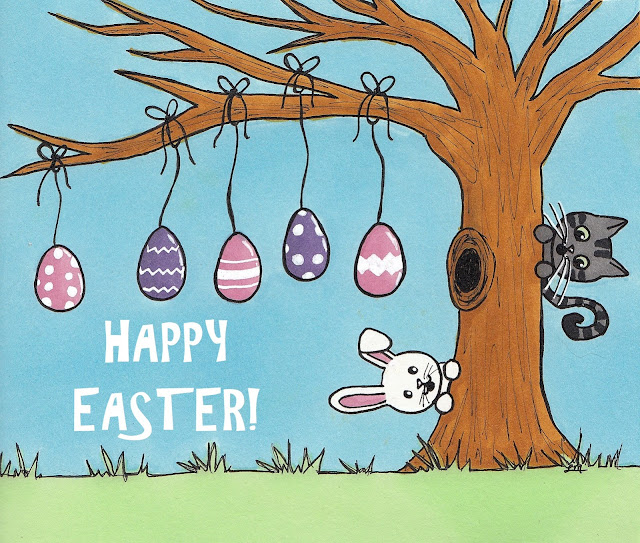 That there is a flashback Easter doodle from 2018. We were perusing our Easter doodles the other day and decided we wanted to share it again as our Easter greeting this year. As it says...


We also have an Easter selfie to share today, and just like our doodle above, it's a flashback. If we're being honest, this is not only a flashback selfie, but it's a flashback selfie we've shared for the past 2 or 3 years. Why? Because this is the only halfway decent Easter shot any of the furbabies have ever allowed me to snap. So, here's our resident pup, none other than Astrid, striking a festive pose. 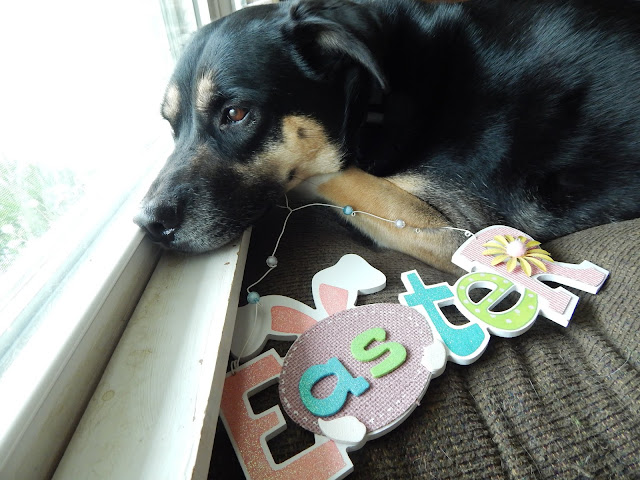 Some Peeps also snapped a group selfie for this Easter Sunday. And no, we're not talking about those human peeps. 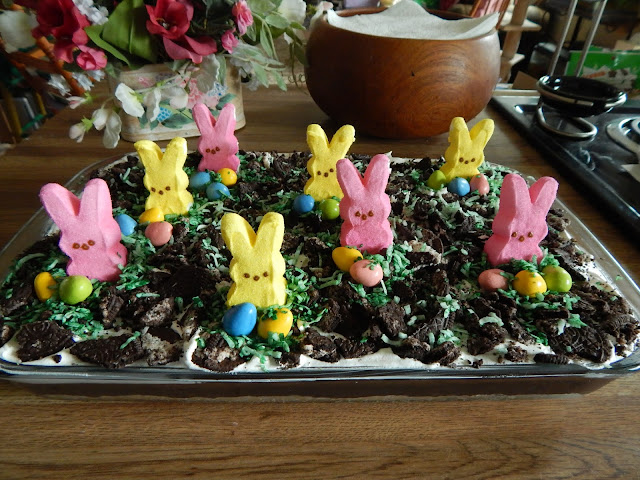 That's the main Easter dessert I make every year. I did not come up with this idea, for the record. I saw an image of this dessert somewhere online years ago, and I've made it every year since then. It's just pie crust on the bottom, chocolate pudding on top of that, and then a layer of whipped cream. The little field of bunnies includes Oreos crumbled up to look like dirt, coconut shreds dyed green to look like grass, pastel peanut M&Ms as Easter eggs, and then of course the bunny Peeps. No one in my family really even likes Peeps, but they're cute and serve their purpose. My sister usually ends up eating all of them.

Even though it's Easter, we're still also going to share our poem for this past week's Thoroughly Poetic Thursday challenge, hosted by Angel Sammy.

We're only sharing these poems on Sundays rather than on Thursdays during the month of April, since the April A to Z Challenge takes place every day except Sunday.

Now, our poetic host always shares a photo prompt to help us along. The prompt for this past week was this enchanting image here:

I definitely used this image as inspiration, but I also took some liberties with it. Longtime and regular visitors to our blog might remember me mentioning my joy for things like fantasy and Halloween. Perhaps that's why the mystical and magical nature of the image above immediately took my mind to a witchy sort of place. I of course had to throw a cat in there, and I even tried to work in a bunny cameo in honor of Easter. If you're interested in reading yet another weird and wacky poem of mine, here it is:

Willa was a witch.
She worked magic like a seamstress worked a stitch.
Willa was not wicked, though.
She most certainly was not, no.

Willa enjoyed her life with magic,
But there was one thing she considered quite tragic.
She had spell books and potions galore,
None of which she found to be a bore.
She even had a happy white rabbit in a magical top hat.
What Willa did not have, though, was a cat.

What is life without a cat?
Every day, Willa wondered just that.
Witches were said to need magical familiars of the feline sort.
In truth, witches served cats like serfs served kings in royal court.
Willa wouldn't mind serving a cat of her own,
And she wished to find one before she was an old crone.

It was said that most witches found their familiar when the time was right.
Willa, though, she decided she would leave that tradition behind.
She wished for the companionship of a cat sooner than later,
And so right then and there she went to her most favorite chamber.

She found herself surrounded by potion bottles and books.
For what she needed, Willa knew exactly where to look.
She pulled from a shelf her clairvoyant crystal ball,
Which could see the darkest of secrets and reveal all.

Placing the crystal ball on a table by the moonlit window,
Willa watched as it began to sparkle and glow.
She said, "Are you awake, crystal ball?
I have a problem I hope you can solve."

The crystal ball replied with a whirling light inside.
"Make it fast. What do you want?" the crystal ball said with a sigh.
Willa smiled and replied, "I want a cat.
I cannot be a happy witch without that."

Tendrils of color spun and spit inside the crystal ball.
It said, "You want to know where to find your cat? Is that all?"
Willa nodded and practically touched her nose to the crystal.
She knew she could trust this item that was so mystical.

The crystal ball became filled with smoke of silver,
Which sparkled as if laced with glitter.
Willa knew exactly what that meant.
Once that smoke cleared, her answer would be present.

Willa sat at the edge of her seat.
She hoped her cat and its location was what she would see.
When the smoke finally began to thin,
Her lips twisted into a giant grin.

In the crystal ball indeed appeared a cat.
Willa was beyond relieved to see that.
It was even a cat with fur of ginger,
Having the same color of hair as her.

"But where are you?" Willa asked the crystal ball cat.
On a hill beneath a full moon in a starlit sky it sat.
Remembering the night sky she had earlier seen outside,
Willa turned to the window to bring the full moon into her sight.

Outside the window, the moon's glow filled the night.
But there was something even better about that sight.
The silhouette of a cat sat on the horizon, basking in the moonlight.
"Does this mean it's true, that a witch's cat will enter her life when the time is right?"

Willa ran from the chamber, to the front door, and into the night.
The smile on her face was, like the moon, big and bright.
The cat, no longer on the horizon, appeared just as happy to see her,
Given that it ran to her in the blink of an eye and a blur.

And just like that, Willa found the best friend she had always wanted.
She was finally a witch with a cat to whom she could feel bonded.
She picked up the cat and hugged its orange fur.
The cat accepted the affection with a meow and a purr.

Willa felt like she'd known the cat for ages,
Like they were old friends and not just familiar faces.
Willa told her furry friend, "You need a good, strong name, that's for certain.
Let me think. Oh, I know! We'll call you Merlin." 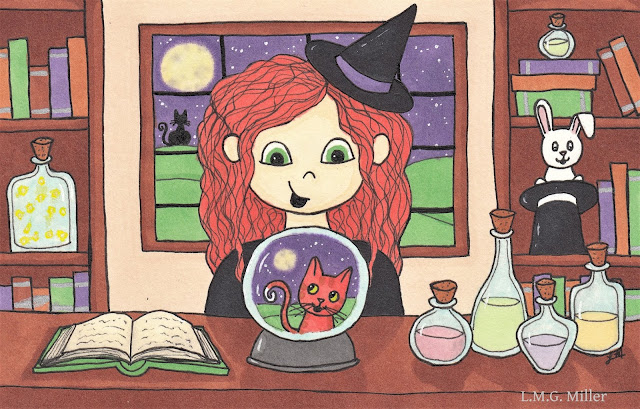 Today's tip is an Easter-inspired one, and it is to always think twice before ever giving anyone an animal as a gift. This could include giving a bunny to a child for Easter, as well as giving a puppy as a Christmas gift, or a kitty as a birthday gift. Caring for any animal will of course take time, effort, knowledge, and preparation. What's more, some animals, such as rabbits, have special dietary or other needs. This is why taking on an animal as a pet should be done with forethought and preparation by the pet's new owner. Giving a child a rabbit for Easter, therefore, could lead to a rabbit ending up in a situation with lack of proper care, and an overwhelmed child or parents. The same goes for giving any animal as a gift, especially if the recipient has not made the proper preparations or does not have the resources to care for a pet. So, never forget that giving an animal a proper home with proper care is something that should always be discussed, researched, and for which the owner should sufficiently be prepared. We have no doubt that all of you reading this already know this.

The above being said, it's worth noting that if a responsible pet owner expresses a desire to receive a pet as a gift, that is a bit of a different story. Someone whom you know well, who is already a proven kind and caring pet owner, and who wants another animal, is someone who could more reasonably receive an animal as a gift. We bet there are plenty of wonderful pet owners out there who have received a best friend in this manner. The important thing is to think such a decision through wisely, and to consider whether an animal will for certain receive the proper care it needs from a potential recipient.
Posted by The Menagerie Mom at 12:36 AM

That dessert looks totally amazing!!! (and we love your doodle too!!) :-)

Happy Easter to everyone! Love that Easter cake you make - looks FUN. Also very much love your poem-story for the fortune teller photo this week. I'm glad Willa got her "familiar", aka kitty and what a perfect name for him too! Thank you so much for being a regular part of our Poetic Thursday fun - your stories are always so much fun.

Happy Easter! Astrid is a cutie pie and that pie/cake/peep dessert looks yummy!

We love your doodle and the throwback Astrid Easter selfie! :)

Your Peep cake is so fun, and looks yummy.

Happy Easter to you and your whole family!

Your dessert is amazing and looks so yummy ! Happy Easter ! Purrs

Love the pictures. That caks does look yummy. Happy Easter.

You are so right about not giving animals as gifts. If you know a person is looking to adopt an animal and you want to buy supplies and/or pay the adoption fee as your gift toward that, fine, but always let the person choose the animal.

That dessert looks yummy, if we can get together for Easter next year, i am making that!

Happy Easter! Can we come over for some dessert? ;)

Hope you guys had a purrfect Easter!

Great poem and drawing to go with it. That dessert is adorable and I bet it was tasty. Nice tips. Happy Easter! XO