It's a rhyming sort of day, isn't it? Thanks to the Thoroughly Poetic Thursday challenge, hosted by Angel Sammy, it's always easy to get poetic.

Our poetry host always helps us along by providing a photo prompt. This week's prompt is this chilly image here: 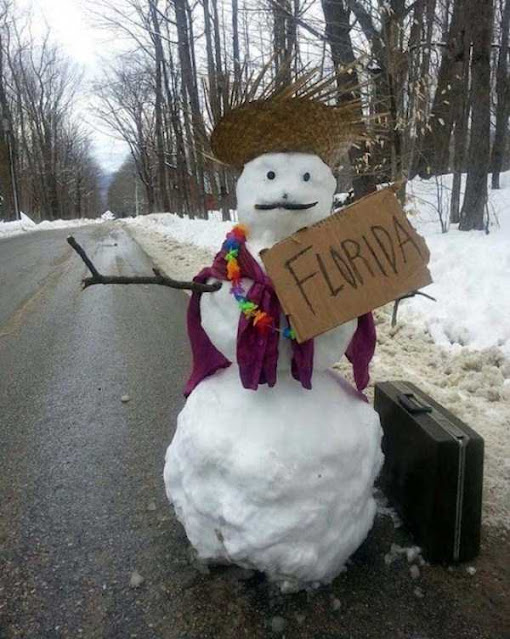 Living in the Midwest, I have a lot of memories of spring arriving, only to then have some snow dumped on it. It even snowed on Easter here a couple years ago. I decided to go with the vague idea of snow in the spring, which left me with this silly little rhyme:

If there was on thing Mr. and Mrs. Cat knew about spring,
It was that the season was none other than a tease.
Despite the fact that they knew all about this,
They still met the arrival of spring with nothing but excitement.

It was sunny and warm on spring's first day,
And Mr. and Mrs. Cat hoped the nice weather had come to stay.
They happily headed out to their garden.
After all, by winter the ground was no longer hardened.

Mr. and Mrs. Cat prepared the garden, pruned the bushes, and watered the lawn.
Then for the evening they went inside with a yawn.
With them they brought bundles of already blooming flowers,
Placing them in vases and with them making the house look far from sour.

Through the kitchen window Mr. and Mrs. Cat admired their work.
They looked at the bushes and flowers outside with a smile and smirk.
Then they brewed some coffee to top off the night,
All still while keeping their colorful spring blooms outside in their sight.

Before long, Mr. and Mrs. Cat began discussing what they would do tomorrow.
Mr. Cat said, "To put the final touches on the garden, Mr. Mutt's tiller we'll need to borrow."
Mrs. Cat suggested, "After that, how about a picnic for lunch?"
With a smile, Mr. Cat said, "I would like that a bunch."

The two discussed what to make for the picnic,
Deciding on sandwiches and salad topped with balsamic.
Mr. Cat returned his gaze to the window, sighed, and said, "Well, shoot.
I guess there's no need to rush, because the point is now moot."

Mrs. Cat asked, "What do you mean?"
Mr. Cat replied, "Look outside and see for yourself the sight quite obscene."
Doing just that, Mrs. Cat saw the snow now falling from the sky.
Around their garden and bushes drifts were already piling high.
Mrs. Cat said, "Well, would you look at that."
A sigh escaped both Mr. and Mrs. Cat

Finally, shrugging, Mr. Cat said, "Well, at least we have coffee to keep us warm.
Until spring decides to truly arrive, we'll weather this storm."
Mrs. Cat nodded and replied, "And once the snow has melted and spring has really sprung,
We'll feast at many a picnic beneath the warm sun.
That said, while I do quite enjoy spring,
I do wish it wasn't such a tease." 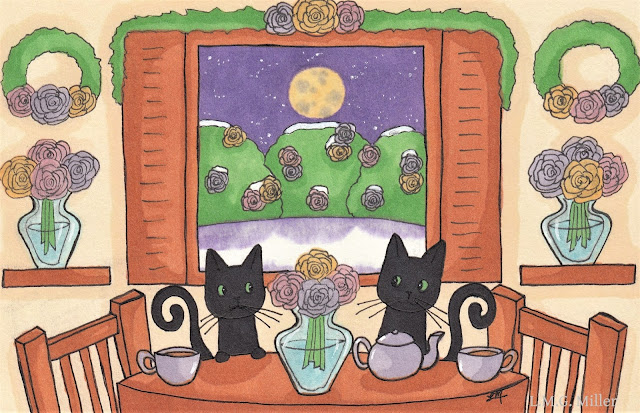 And now it's of course time for Brian's Thankful Thursday Blog Hop.

As always, Thimble is here to share some gratitude. Today, this tabby girl is thankful for springtime sunshine! 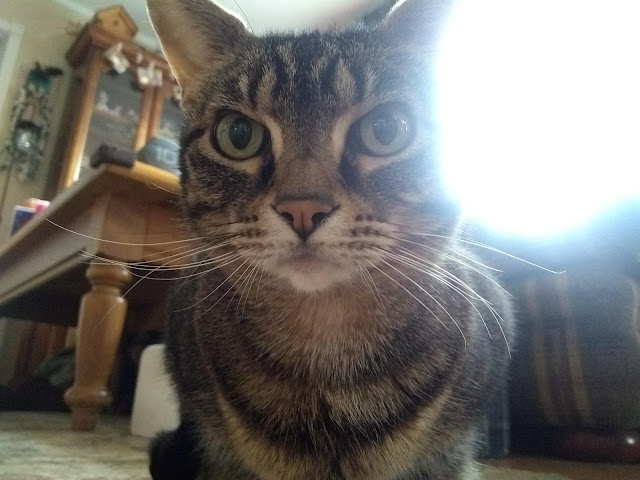 Just look at that bright and shiny orb coming in through the window! Thimble loves it. 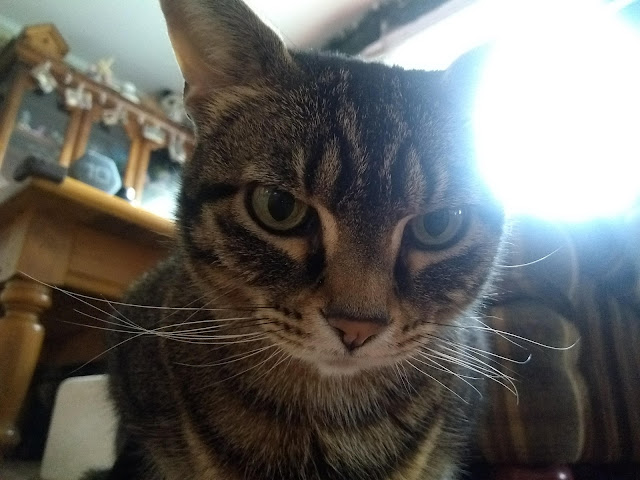 ***
Tip of the Day
As part of National Pet Poison Awareness Month, we're now talking about the risk of poisonous bites your kitty or pup might receive from other critters. Depending on where you live, or where you might be visiting with your furbaby, you might find it necessary to be on the lookout for critters such as snakes and spiders whose bites can have toxic effects. When it comes to snakes, some of the dangerous ones include certain coral snakes and rattlesnakes. As for spiders, as most of you certainly know, black widows and brown recluses are among the most dangerous. Bites from such critters can result in any number of dangerous or life-threatening side effects, including cardiovascular shock, respiratory distress, neurological damage, and tissue damage, among others.
When outdoors, especially in areas where snakes, spiders, or other venomous critters are a known possibility, always monitor your furbaby and keep an eye out for danger. As needed, research the wildlife of areas you will be, so that you know what snakes, spiders, and other critters of which to be cautious. Of course, if your kitty or pup is bitten by a spider or snake, especially a known venomous one, do not hesitate to seek veterinary care. In many such cases, counteracting the venom in a timely manner is crucial.
Posted by The Menagerie Mom at 6:05 AM

Thimble has a fairy light on her head!

Excellent poem and I love the drawing. Thimble is a cutie, that is a lot of light on her. Great tips too.

Fun poem, yes, spring can be a tease.

Sunshine is a beautiful thing for which to be thankful, i wish you much of it.

Cute prompt and poem...and adorable Thimble, of course. I remember when it snowed once on Mother's Day. It was 72 degrees today and Mudpie has acted like it's the only warm day we're going to see all year LOL.

Super cute story about Mr. and Mrs. Cat inspired by this week's poetic challenge photo. We kind of wonder where Spring is except today we will be close to 80 after days in the 50s so maybe it's just a TEASE?

You know, I never really thought about Spring being a tease...but it surely is! Yesterday, I was running around in short sleeves; today, I'm wearing my winter coat and a hat!