On this past Mancat Monday, I showed you how pretty my boy Evan is in pink. Remember? 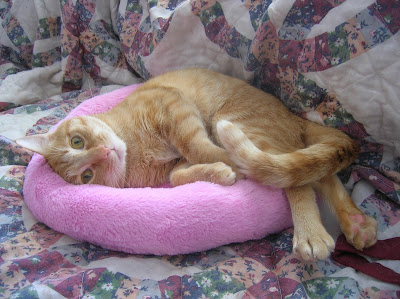 And because I just can't help myself, here are a couple more shots you haven't seen yet from that pink photo shoot: 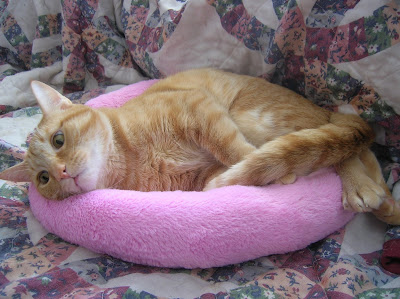 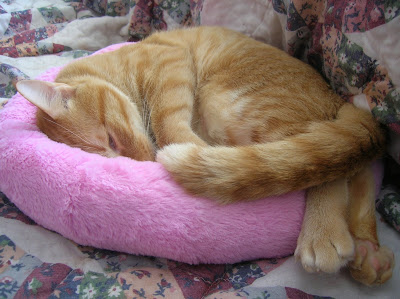 What I didn't show you on Monday, though, was how my boy made his way into that gloriously pink bed. Those of you familiar with Evan's story know that he is paralyzed in his hind legs. That means he can't just jump up onto the couch like any other cat would. But, that pink bed is on the couch, so how did Evan get up there? Well, here's a little hint: 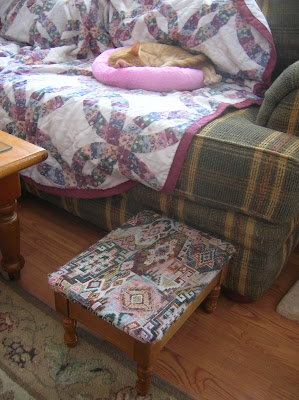 Foot stools in my house are not just foot stools. Rather, they're strategically placed stepping stools for Evan. Evan may not be able to jump, but that doesn't mean he can't climb. His upper body strength is quite impressive, and he can pull himself up onto stools and then onto furniture like a pro.

***EDIT: I had a video here of Evan pulling himself onto a stool beside my bed. The video was only inconsistently working at best, though. Multiple of you mentioned being unable to see it, and ultimately I couldn't view it here at all, no matter what I tried. I had previously mentioned that, if need be, I would jump on the YouTube bandwagon and share videos that way. And so I have. At this exact moment I don't have access to the video I originally shared here. But, until I can get home this evening and post that video through YouTube, here are a couple of other videos of my boy Evan doing his thing:


***EDIT II: Finally, below is the short and simple video I've been trying to share with you all day. It shows Evan pulling himself up onto a stool beside my bed. Evan loves to snuggle with me at night, and this is how he climbs into bed.
(Would you look at that. I joined the 21st century and sort of figured out how to use YouTube. The only thing I need now is an actual video camera so that you all don't have to watch such grainy, low quality videos.)

Well, it's finally Friday, furiends! Are you ready for the weekend?


***
Our Tip of the Day:
Today's tip is simple and has probably already made itself evident in this post...If you have an aging, arthritic, or in some way special needs animal that is unable to jump up onto furniture, provide steps for him or her. This can be done easily by strategically placing stools, boxes, low chairs, or other similarly makeshift steps beside furniture. There are also pet steps and ramps specifically made and sold for this exact purpose. It may take some experimentation, as some animals may have pickier preferences for what types of surfaces they feel safe using as steps. But, with time and patience, you can find a system that works for your aging, arthritic, or special needs animal.
Posted by The Menagerie Mom at 1:57 AM

Well darn, we can't see the video of Evan. We love hearing about him and sure do thank you for taking such good care of him. He looks like such a happy cat.

What a determined boy Evan is climbing up using the foot stool to reach you on the bed.
Luv Hannah and Lucy xx xx

The steps are ALWAYS a good idea and I have used them, even if neither of my cats ever needed them. Just makes things easier. If I were you, I would "jump on the YouTube bandwagon", I couldn't view it at all :(
catchatwithcarenandcody

I am healthy, but my little cat tree placed by my chair is an excellent staircase!

Yippee, Evan! You look so good on pink!

Evan is a little wonder boy, and such a darling!
Last week on the Friday Flashback I had the same problem with a video. I Could see it when I posted it but then it just left a white square. Some could see it and some couldn't, so I think it must be a blogger problem.

He's SO amazing and pink is definitely his color!!!

These pictures are all so adorable of him and I loved seeing him in action in the videos! His upper body strength really is amazing.

Evan is so adorable. And lucky to have such a great Mom that knows what he needs to live a full life.

We think Evan looks good on pink. And we admire him...