My furbabies and I have not yet done much in the way of reviews and giveaways on our blog. However, as someone who has done some entrepreneurial work herself, I very much so understand the importance of word of mouth and online presence. That's why my furbabies and I, when we were recently approached about some review opportunities, decided to accept. Our reviews will be limited to a maximum of a couple of posts per month, and only for products that we find of interest to and beneficial to our readers.

That all being said, Smiling Paws Pets recently reached out to me about reviewing one of their products. 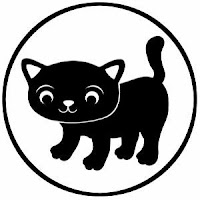 Smiling Paws Pets sells cat litter mats, as well as odor neutralizers. Both sounded like products that my house could benefit from, thanks to certain feline furbabies. In the end, I chose the litter mat. They come in brown, black, or gray, and I chose the brown.

Now, here's where I will give an explanation of the primary litter box area at my house, as it is a special setup due to the special needs of hind limb paralyzed Evan. To aid in this explanation, here is a picture of the bathroom area, prior to us setting up our Smiling Paws Pets cat litter mat: 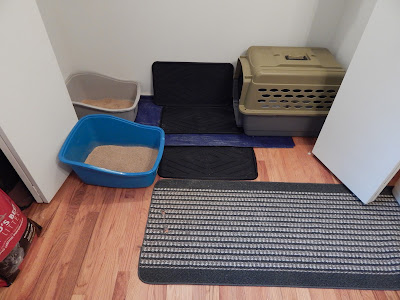 On the left you see two litter boxes, used primarily by Thimble and Toby, as well as sometimes Eddy (who also has a litter box that essentially only she uses, in her favorite room of the house). On the right you see a carrier with its door removed. This carrier is Evan's bathroom. Not only did Evan never take to litter, but, as a paralyzed kitty, he never could quite maneuver a litter box. Instead, he is towel trained. The carrier you see in the photo above always contains a towel for this purpose.

Also in the picture you'll see a blue tarp beneath and in front of Evan's bathroom, as well as three black boot trays. To be completely blunt and honest, these are due to the fact that Evan doesn't always have the best of aim. He requires a low entrance into his bathroom, and sometimes he forgets to turn away from that entrance before relieving himself. This does not happen terribly often, but it happens enough that a tarp and some backup boot trays have been proven necessary.

Prior to receiving our Smiling Paws Pets litter mat, we were using the rug you see in the above picture, to help catch stray litter. The litter-using kitties in the house dig and scatter enough that it lands not only onto the tarp and boot trays, but also well past them. What's more, I've learned that what they don't throw and strew about, my boy Evan drags through and pulls along with him. That was in large part why a rug was placed there, to help remove rogue litter from Evan on his journey out of the room. The rug did that particular job well enough. However, the litter it trapped did not stay trapped for long. Pet and human feet always tended to kick it about, and these same feet also tended to stomp on and crush the corn litter and create a dusty residue on the rug and surrounding floor.

For all such reasons, when I was introduced to the Smiling Paws Pet cat litter mat, I was more than excited to give it a try. 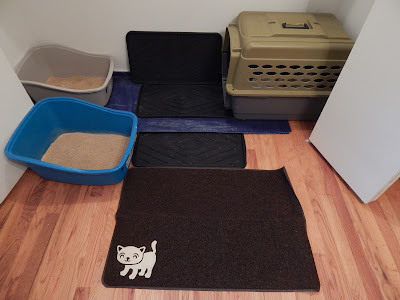 Securely folded and rolled up, the mat arrived in great condition. Its packaging is also why it has the folds and rolls you see in the above picture. However, I was also provided with instructions on how you can remove the folds and rolls. In short, all it takes is some countering of the rolling on top of heat application, such as with a hair dryer or by placing the mat in the sun. I ended up not needing to use the heating technique on mine, as it actually flattened out quite nicely just from my rolling it back into place followed by the high traffic it received.

The Smiling Paws Pets website describes the mat as being a "loofah like material", with the purpose of trapping litter while also being easy on kitty paws. 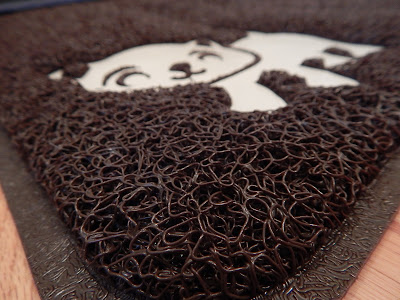 The mat is not very stiff, and instead gives under your feet pretty well when walked upon. Despite the appearance of it, it does not feel very rough or scratchy when touched. One of the main factors I take into account when choosing any sort of rug or mat for my house is the surface and how it feels, as anything rough will scrape and potentially chaff Evan's underside due to his method of ambulation. I didn't have to wait long to find out how Evan liked the mat, though... 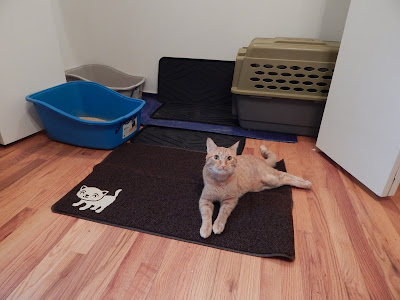 The verdict: Evan loves it! He immediately came over, did a little walk across it, and decided it was comfy enough to serve as a bed. What's more, since putting the mat down days ago, Evan has not developed any scrapes or scratches or rough spots from walking across it.

Another factor that Evan always helps me test out is how skid-proof a rug or mat truly is. Understandably, Evan tends to drag with him anything that is not properly anchored to the floor. But did Evan drag this mat off with him? Nope! The back of the Smiling Paws Pets cat litter mat is, as it says on their website, indeed skid-proof.

With those tests completed, we then needed to determine how well the mat traps litter. Thimble was the first to test this out... 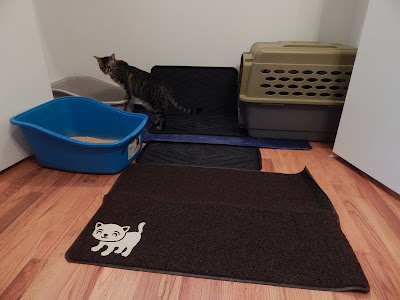 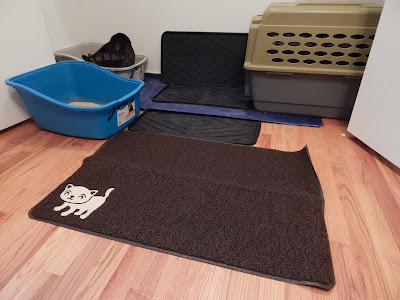 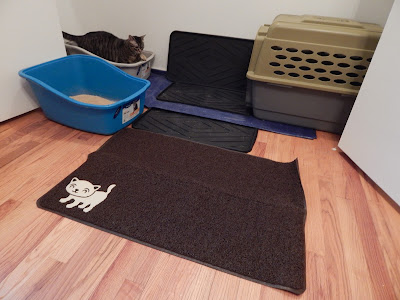 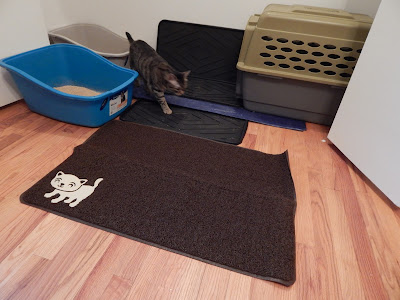 Then Toby wanted to give it a run for its money... 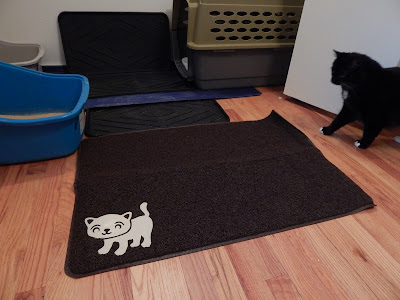 Even just after those two litter box adventures, the mat already had trapped its share of stray litter. 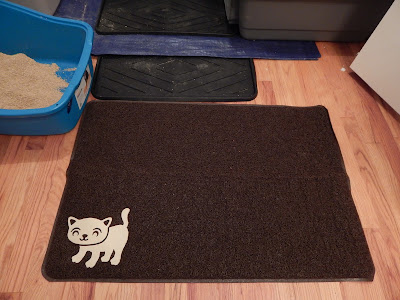 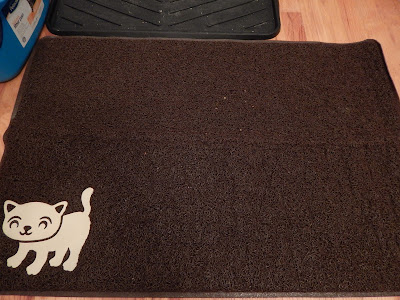 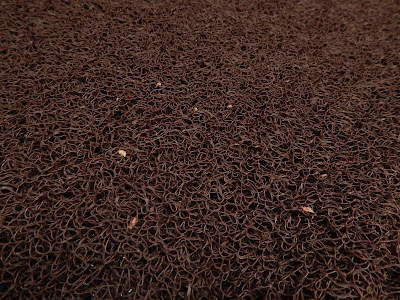 More importantly, days have passed since I put down the mat, and it is still doing great at trapping litter that would otherwise be strewn about the house. I can honestly say that I find far less litter out and about in the litter box room as well as in the house overall now that we are using this mat instead of a regular rug. The litter truly does get trapped in the mat's material, which means it's not getting kicked or dragged or crushed into dust by foot traffic.

The litter mat is doing its job so well that I plan on getting another one to put under Eddy's favorite litter box in another room. She, too, is a devout litter scatterer, and I will be more than glad to have a truly effective mat beneath her box so that I will no longer have to sweep the area every time I turn around.

As a recap, here are some of the primary details about the litter mat, as seen on the Smiling Paws Pets website:
And now, Smiling Paws Pets has granted me a giveaway, so that one of my lucky readers can win a cat litter mat of their own. If you win, you'll get to choose between the brown, black, or gray mat. Simply fill out the Rafflecopter below for your chance to win!

Happy Tuesday to all of our furiends!

Disclaimer: We received product compensation from Smiling Paws Pets in exchange for an honest review. All opinions are our own. We only review products that we believe will be of interest to our readers, and we never recommend a product that we do not believe in.


***
Our Tip of the Day:
Keep in mind that a cat's whiskers are not the only sensitive, sensory tools they possess. A cat's feet, especially their paw pads, are also highly sensitized. Keep this in mind when selecting litter, bedding, rugs, and other items that will touch your kitty's paws. Some cats will avoid the litter box if it contains a type of litter that they do not like the feel of, and some cats will avoid bedding or areas of the floor with bothersome textures. If your kitty seems to be averse to going into a certain area, never rule out the simple possibility that they just don't like the feel of it.
Posted by The Menagerie Mom at 1:29 AM

We track litter a lot. This looks like a great mat that would help with it. Thanks for the review.

It's amazing just how much litter my two cats can drag out of their litter boxes. And, once out of the box it gets scattered all over the place.

That litter mat looks great. Love the fact that Evan thinks it is a great bed. We sure need about six of those. You are just so great to set up so many great things for Evan. He is such a lucky cat.

Great job on your first review. I want to get a mat like that, Prancie does a lot of digging and it sticks in her paws so she will leave a trail for several feet outside the box. I am glad you worked out a way for Evan that works pretty well. Great tip about kitty feet being sensitive, Lucy wouldn't use the box that last 2 years of her life.

Excellent review! It really held our interest and lots of great pictures helped!

Great review. We luv ours too. Mommy says she would luv to have another one as well.

He's not too bad, but it sticks to his feet and he drags that around. So this might help.
Digicats {at} Sbcglobal {dot} Net

Very nice review! We'll be getting ours to review soon, so I hope I like it too!

That's a really helpful and informative review. That mat sounds like something we could use here. :)

They do a little bit.