Goodness, the end of the alphabet sure can throw you for a loop. Today, the A to Z Challenge brings us to the letter U, and I yet again had to beg the internet to give me some options. I'll be honest, I really wanted to draw a unicorn for this. But, since I'm trying to stick to "real" animals (can't unicorns be real?!?), I told myself that was a no-go. There was also the option of an umbrella fish, but I wasn't too keen on that idea. No offense to the umbrella fish, of course.

Don't worry, though, I finally came to a decision when the internet reminded me of the existence of this little critter: 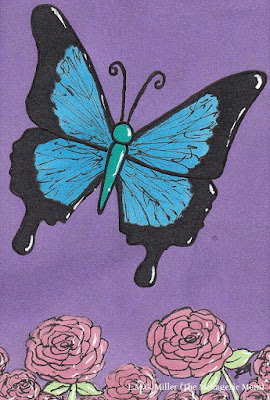 That's a Ulysses butterfly, a large swallowtail native to countries such as Australia. I've always loved swallowtail butterflies, so I was quite grateful that the world wide web was able to help me realize that I could draw one for the ornery letter U.


Now, though, butterflies aside, it's pup Astrid's turn to review some goodies as part of Chewy.com's Blogger Outreach Program. As we've said before, Astrid is a picky pup. She always has a number of small bags of dry food open at a time, as she'll go on a hunger strike if she has to eat only one kind of food for too long. That's probably why when I saw Cesar® dry food on the list of goodies for this month, I was ecstatic. 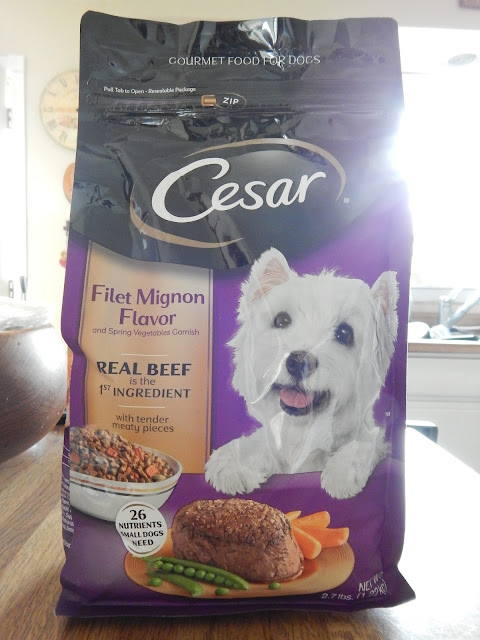 When we started giving hungry Astrid more moist food a while back, to help balance out her hunger strikes on dry food, we learned that she loves Cesar® moist food. Speaking of which, this bag of dry food just so happened to come with a box of 24 trays of their moist food, in 4 of Astrid's favorite flavors. 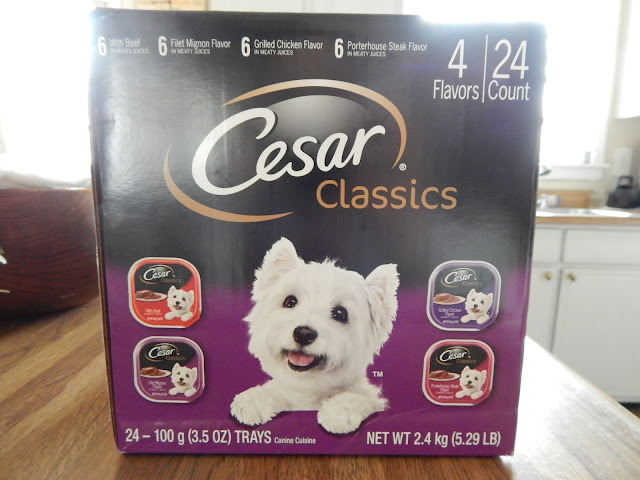 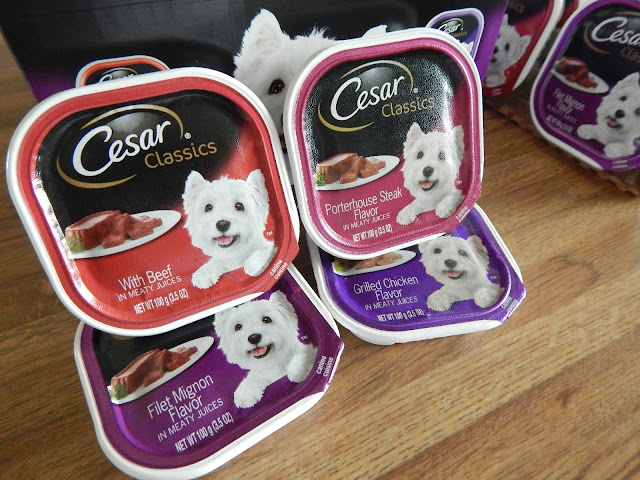 Seriously, how awesome is that? Already knowing that Astrid loves Cesar® moist food (just as long as she doesn't have to eat the same flavor twice in a row), I went right on with testing her out on the dry food for the first time. 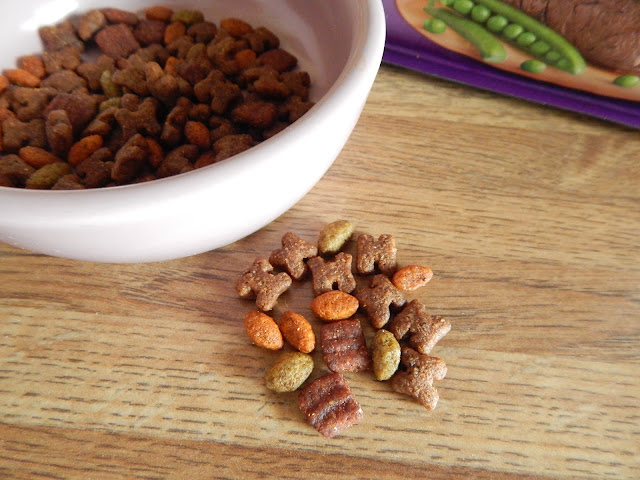 I picked a flavor that she's always loved in the moist variety, that being filet mignon. This dry version also has vegetable garnish, as they call it. The first ingredient is indeed beef, but it does also contain a variety of other ingredients, including by-products and dyes. I'm not the biggest fan of additives such as dyes and the like, but let's be honest, Astrid doesn't really give me the option to be all that picky when selecting a food she might actually eat.

Another pro is that the kibbles are relatively small, which Astrid always prefers. After all, chewing isn't her favorite thing in the world. Right, Astrid? 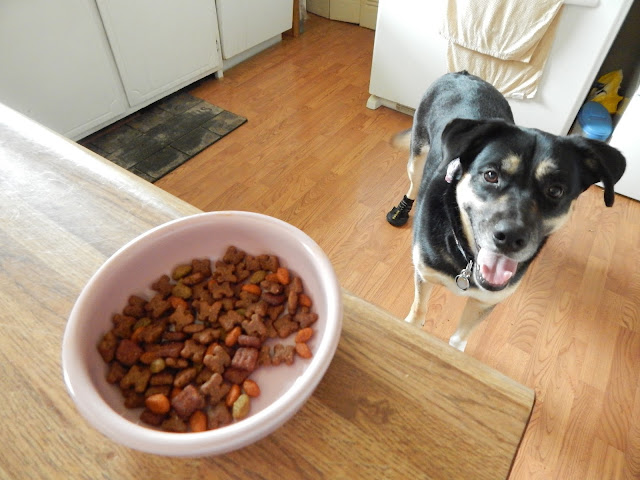 As a completely off topic side note, that there happy face is the one Astrid has plastered on her face at least 90% of the time. So, don't believe all of the pouty puppy poses she always saves for the camera and which get posted here on our blog, because they're all show. She's usually all smiles just like that you see up there!

And, as another side note, we had a reader ask a while back about Astrid's boot you see there in that picture, but we forgot to address it until now. For those who have been following us a while, you might remember that last year Astrid had a benign tumor growing on a paw pad of her right hind leg. It's a type of tumor that will go away on its own over time, and also given the tricky location of it, Astrid's vet and we decided to go that route rather than surgery. It took longer than expected for the tumor to resolve itself, but after roughly a year, it did. That being said, within a month, it came back again. It did not grow as large this time, it does not seem to bother her, and she has no issue wearing a boot on that foot during walks and such, so that's how we're currently handling it. Her vet will be reassessing it in the near future, though, and we'll keep you posted.

Back on track, though, who wants to know if Astrid liked the Cesar® dry food? 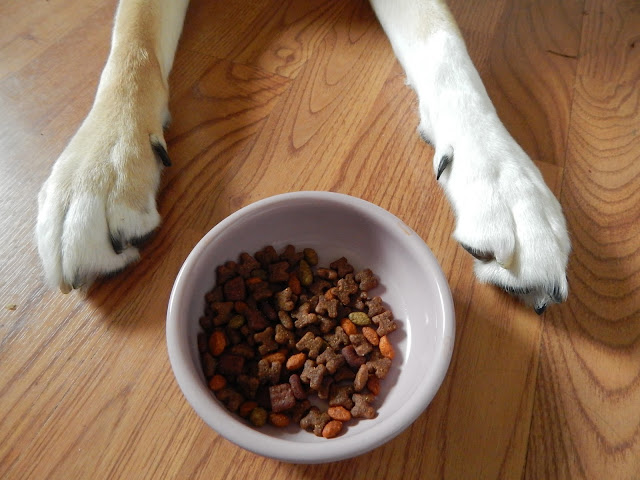 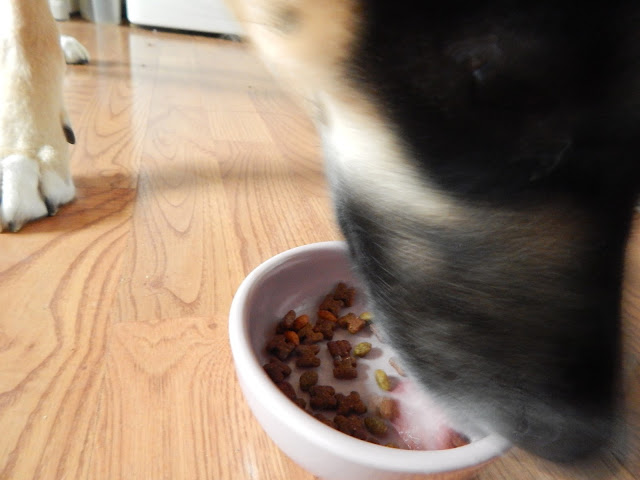 She did! So much so that I couldn't manage any semblance of a decent shot of her scarfing it down. The best part is that when we mix in some of these kibbles with her other bags of food, she'll usually eat the whole bowl then. That's a rarity for her.

Though I didn't get any shots of it, she also loves the moist food, as expected. That's 4 paws up for CesarⓇ food!


(Disclaimer: As members of the Chewy.com Blogger Outreach Program, we received the Cesar® filet mignon dry food and moist food variety pack in exchange for an honest review. All opinions are our own. We only review products that we believe will be of interest to our readers, and we never recommend a product that we do not believe in.)


Whew, that was a long one, wasn't it? If you're still reading, kudos to you!

***
Our Tip of the Day:
Especially this time of year, when the days are hot, be aware of the effects the weather can have on your pup or kitty's food. For example, don't store food out in your garage if it becomes hot out there this time of year. Also, when you order food online, always try to make sure that it won't sit for long out on your porch in the sun and heat. If you are home when ordered food arrives, feel the box and the food containers, to hopefully ensure that they did not reach an elevated temperature on the delivery truck. Of course, this could also potentially occur even with food that was purchased at a store, as even the store's delivery trucks or warehouses could become overheated. This is all important due to the fact that exposure to heat could potentially cause food to spoil, and you might not always realize spoilage immediately upon opening a can or a bag of the food, which means your furbaby could potentially ingest spoiled food before you realize it. What's more, ingestion of spoiled food could have consequences such as vomiting, diarrhea, or even something as severe as pancreatitis. So, long story short, please do not store your furbaby's food in a hot area, and be sure to always do at least a quick examination of your furbaby's food before feeding it. And don't be afraid to do a sniff test, as sometimes spoilage is first evident by odor rather than appearance. And, of course, if you are ever concerned that your furbaby ingested spoiled food or is showing symptoms of such an event, consult a veterinarian.
Posted by The Menagerie Mom at 6:25 AM

Astrid sure enjoyed her food! Looks like it's a winner! And pawsome job on the letter U. We like to call those flutterbees. :)

That is an excellent drawing of a butterfly. There is a butterfly place about an hour away that I have visited, I wonder if that is the kind of blue one I Saw there. I am glad Astrid liked the food. It is nice to see that smile on her face. :) Great tip too. I ordered flea meds from petmeds.com once and my niece gave me a big speech about not knowing where their merchandise comes from and how it could be stored in places that are too hot or too cold. I never ordered from there again.

Dat was a pawsum deal. Glad she liked it. Big hugs

I'd never heard of the Ulysses butterfly before! I love the symbolism of the butterfly (“What the caterpillar calls the end, the rest of the world calls a butterfly.” ― Lao Tzu or "What the caterpillar perceives is the end, to the butterfly is just the beginning.") - it reminds me that we are always growing and changing and mourning "ends" aren't necessary when you consider one is just moving in a different direction. Astrid looks VERY happy ... she sounds as picky as most cats :)

Chewing is *such* a bother!!! Filet mignon...yum! I wouldn't mind that meal myself :)

We think Astrid give that food the paws up! We loved your drawing of the Ulysses butterfly!

That butterfly is incredible. Wish they were in the U.S. Thanks for sharing something so beautiful. XOCK, Lily Olivia, Mauricio, Misty May, Giulietta, Angel Fiona, Astrid, Lisbeth, Calista Jo and Cooper Murphy