It's Thursday, which means we're ready to rhyme. Just like always, we're excited to be participating in Angel Sammy and Teddy's Thoroughly Poetic Thursday challenge. 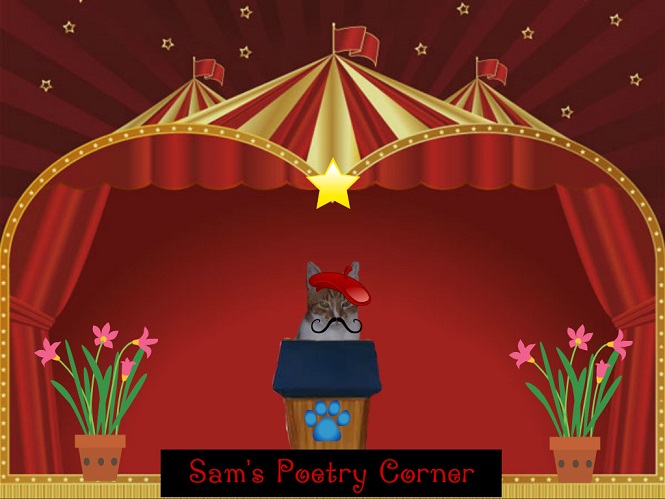 Each week, our hosts share a photo prompt to help guide us on our poetic endeavors. This week's image is this fun one here:

I think I mentioned this last week, but I've sort of made an extra challenge for myself. For the month of October, I am of course using the photo prompts as inspiration for my poems. In addition to this, though, I'm also trying to make all of my poems Halloween-esque. I can't help it. I love Halloween.

There isn't a whole lot more explaining to do than that. So, what happened when I used that pedaling photo prompt up there to attempt to scribble up a Halloween poem? This lengthy, strange thing here happened:

Helga was a young witch.
Two days before Halloween, she found herself in a bit of a pinch.
You see, Helga was not all that good at flying.
Her skills with a broomstick were lacking, there was no denying.

On this particular occasion, she broke her broomstick clean in half.
She had flown right into a tree, and that was that.
She asked for advice from her cats, Poggins and Padge,
Who led her to the little shop called Broomsticks by the Batch.

About her situation, Helga now felt hope.
She entered the store and began to scope.
There was just one little problem, though.
There were no broomsticks in sight, no!

Shelves and shelves lined the shop's walls,
But they were empty and Helga wanted to bawl.
The shop owner then suddenly appeared,
Finding Helga nearly in tears.

"Where are all of the brooms?" Helga asked.
"Mine is broken and I need one for my Halloween tasks.
I have glowing pumpkins and fall flowers to deliver,
And I must fly to the grocer's for eye of newt and werewolf liver.
Oh, and I can't forget that I must dash to my lab to stir up some potions.
Please, I need a broom to get me back in motion!"

The shop owner laughed and put up his hand.
He begged, "Now, wait just one minute, if that you can stand.
You and every other witch in town needs a broom.
That's why off the shelves every single broom already did zoom!"

Helga cried, "There are no broomsticks left all?"
Now she was certain she was going to bawl.
But the shop owner said, "Hold on just one second.
There is one solution, that I do reckon."

The shop owner disappeared through the back door,
And he was gone for ten minutes and more.
Upon his return, he was wheeling a bicycle.
Helga did not deem this solution even a little bit passable.

Helga stepped back and shook her head,
And to the shop owner, this is what she said:
"If I ride a bike, I will fall and hit my head.
I do not want to end up amongst the dead!"

It was then that Helga added, looking the shop owner in the eye,
"I need something that will allow me to fly!"
The shop owner smiled and he then did reply,
"Trust me, this bike right here will soar in the sky."

The shop owner suggested she at least give it a try,
Insisting and insisting that this silly bicycle could fly.
Poggins and Padge even jumped into the bicycle's basket.
Clearly, Helga's cats did not fear ending up in a casket.

Finally, Helga threw her hands up and caved.
After all, no other solution was being raised.
Helga wheeled the bicycle outside,
Though she did not really want to go for a ride.

Helga asked, "So, how do I make this thing fly?"
"Get on and pedal!" was the shop owner's reply.
Helga was nothing if not skeptical.
She hoped this didn't turn into an embarrassing spectacle.

Helga had never before ridden a bike.
The thought of it sort of gave her a fright.
Poggins and Padge waited in the bike's basket, eyes excited and wide.
Helga told the cats, "This is surely going to be a bumpy ride."

Balancing on a bike was nothing like a broomstick,
And Helga did not like it even one little bit.
She could barely even sit on this thing.
How was she supposed to ride it as if it had wings?

The shop owner clapped his hands and said, "Pedal!"
In truth, Helga felt really quite unsettled.
"Take it for a test drive," the shop owner encouraged.
Helga's anxiety on the matter really began to flourish.

Nevertheless, Helga put her feet on the pedals.
If she survived, she would surely deserve a medal.
Struggling to balance, she pedaled with eyes shut tight.
But, believe it or not, the shop owner was right!

With the very first pedal, she hovered above the ground.
The air filled with Poggins and Padge's purring sounds.
Helga herself let out a cheer.
She now felt ready to set aside her fear.

With more pedaling, the bike and its passengers rose above the trees.
Riding this thing was really quite a breeze!
The faster Helga pedaled, the faster the bike flew.
Everything the shop owner said had been true.

Indeed, she took the bicycle for quite a test drive.
This thing made her feel ever so alive!
On the bike, she ran all of her Halloween errands.
She delivered glowing pumpkins made for scaring,
And she delivered flowers with fall colors quite daring.
Then she flew to the grocer's and thereafter to her lab,
And oodles of spare time she even then had.

When she returned to the shop with the bike in tow,
The shop owner asked, "So, how did it go?
Do you think the bike is a good fit?"
In response, Helga declared, "I'll take it!" 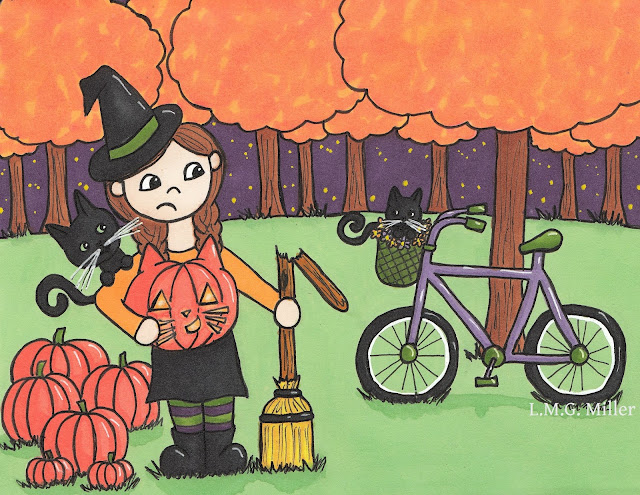 
Does anyone know what's up next? If you guessed Thimble, and of course Brian's Thankful Thursday Blog Hop, you're right! 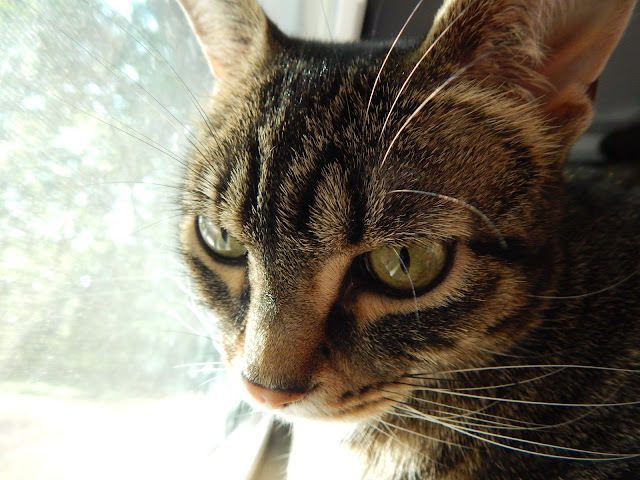 Thimble wanted to show off her whiskers today. 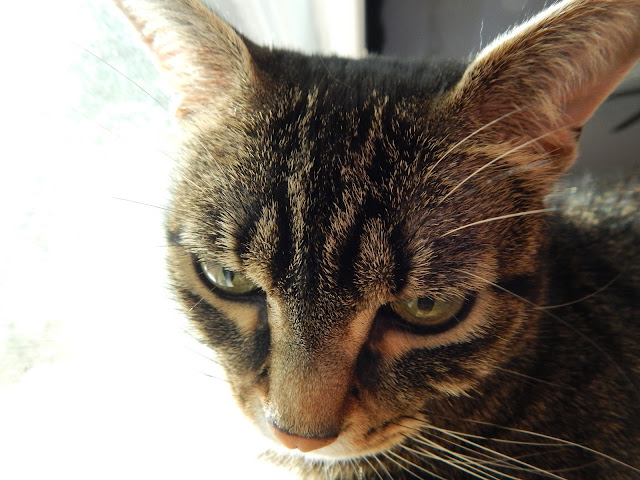 More often than not, it's the whiskers on the cute little cheeks that get all of the attention. So, Thimble decided to change things up today. That's why you're getting a good look at those whiskers above her cute little eyes! 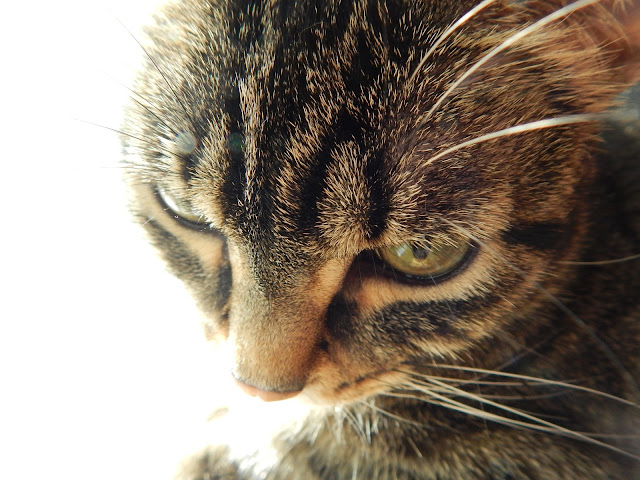 Thimble thinks that long, healthy, adorable whiskers are something for which to be very grateful. That's why she's entering this as her thankful for Brian's Thankful Thursday Blog Hop.

We're sure we sound like a broken record here, but of course we also have to say that we're so very thankful for all of you!


As we do every Thursday, we're here now to share with you all the fill-in statements for tomorrow's Friendly Fill-Ins. Ellen of 15andmeowing came up with the first two, and I came up with the second two.

Yesterday's Halloween tip was about the benefits of feeding pumpkin to your furbabies. Today's tip is related to this, but is about a part of the pumpkin that isn't as often discussed with regard to a furbaby's diet. We're talking about those pumpkin seeds. If fed in a manner that is safe, pumpkin seeds can have health benefits for our furbabies, just as they can for humans. For example, pumpkin seeds contain valuable nutrients, and they can have anti-inflammatory properties. It is also believed by some that pumpkin seeds have some deworming properties as well.

All of the above being said, if you decide to offer pumpkin seeds to your kitty or pup, of course do so safely. First, feed them only as an occasional treat or food topper. In addition, if the seeds are a potential choking hazard, you can cut them into small pieces. Also, of course, ensure that the pumpkin seeds are plain, and that they do not contain any added ingredients, such as onion, garlic, or even salt or sugar. We'll again also add that, should your furbaby have any health concerns, of course first discuss adding anything such as pumpkin seeds to your furbaby's diet with your veterinarian.
Posted by The Menagerie Mom at 1:10 AM

That poem is absolutely fabulous - a wonderful bicycle tale courtesy of Helga the witch who "made do" with a bike instead of a broomstick; a resourceful witch indeed! Love the accompanying doodle too. You know what big fans we are of your poem-stories on Thursdays and this one has that wonderful Halloween "flavor" too! Thanks for including some closeups of those eyebrow whiskers of Thimble's - they are majestic indeed........

Fabulous Whiskers Thimble. And I love the drawing. It's so cute!

Your poem is most wonderful and so are your whiskers sweet Thimble! Thanks for joining the Thankful Thursday Blog Hop!

The poem was terrific as are you whiskers Thimble. Love the black cat in the basket on the bicycle. Have a good day.

Love the flying bicycle! And two week black cats, with white whiskers.
Thimble, your eyebrow whiskers are adorable! My favorite kitty whiskers are the one's on a cats legs...

The poem was absolutely wonderful. We love the kitty in the basket in the doodle. Just love all the Halloween theme doodles that you have been during. Thimble, we are always happy to see those beautiful whiskers. Thanks for the share. Have a great day.
World of Animals

MOL! We've never seen a bike-riding witch before. What a fun poem!

That's a neat poem! Yes, if she can't balance on a broom, a bike she can hold and steer sounds like a fabulous solution.

Your poems are always so very well done.

Your creativity is something to behold!!! (And so is your adorableness, Thimble!)

That was fantastic! And I love the drawing you made to go with it. Thimble does have adorable whiskers and eyes and everything else too. Great tip, we love pumpkin seeds, I just baked some the other day.

Thimble...Have I told you how beautiful you are!
The Poem is great - do think if I wish really hard, Helga will deliver eye of newt and werewolf liver to my house!
I LOVE her doodle!
Purrs
Marv

We are glad Helga found a bike she liked.

We loved the story of Helga. And Thimble, you do have some mighty fine cheek and eyebrow whiskers. Of course, your mom's doodle is a winner. XOCK, angel Lily Olivia, Mauricio, Misty May, Giulietta, angel Fiona, Astrid, Lisbeth, Calista Jo, Cooper Murphy and Sawyer