Our post today is different than our usual Wednesday post. Well, one thing is the way it usually is, and that's your dose of pup Astrid. 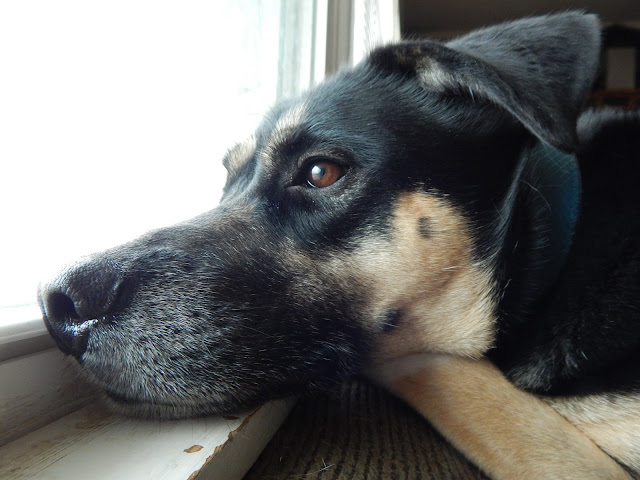 Now, though, we're doing things a little bit differently. Since tomorrow is Thanksgiving here in the US, we're trying to keep tomorrow's post mostly focused on Thanksgiving and giving thanks. So, to keep tomorrow's post as focused on that as possible, we decided to share our usual Thursday poem today instead. That means we're participating in Angel Sammy and Teddy's Thoroughly Poetic Thursday challenge a day early this week. We hope our hosts don't mind.

Each week, our poetic hosts share a photo prompt to help spark our creativity. The photo for this week's poetry is this fun and fantastical one here:

As a fan of all things fantasy and whimsical, I was incredibly excited to see this image that our hosts shared. That being said, my mind was nevertheless also in a holiday mindset as I scribbled up my rhyme. That's how I ended up with this, as always, weird and wacky poem:


Each and every holiday,
Friends and family did invade.
This irked Jack the cat to no end,
And away these guests he wished to send.

This year, one invader brought eggnog,
As well as a bumbling and drooling mutt of a dog.
Jack was nothing if not old, wise, and grey,
So didn't he have the right to tell the invaders they could not stay?

Before he knew it, Jack the cat's home was swarming with folk,
Something which the feline had hoped was nothing but a joke.
Alas, though, guests were traipsing all over the place,
And that mutt of a dog was using the living room to run and race.

The turkey and its aroma were now emerging from the oven,
A fact that Jack the cat would, on most occasions, be loving.
Right now, though, he'd trade that turkey for some peace and quiet.
Instead, the house was turning into a place more fit for a riot.

As Jack moseyed past the turkey and pies and cranberry sauce,
Suddenly at his side appeared that bumbling, drooling dog.
The mutt said, "I have something I need to ask you.
Can you tell where I can go to the loo?"

Jack the cat growled and hissed,
But he didn't want the dog to, well, miss.
A fastidious feline, that's what Jack was,
And so toward the back door he gave the dog a shove.

Jack gazed out at the garden of turnips and mums,
And suddenly a chirruping and purring cat he did become.
"Come on, your loo is out here," he said to the dog,
Who did run and jump and annoyingly hop.

A gnome stood aside the mums, and the dog did cringe at the sight.
"Do you think that there gnome might, well, bite?"
"Unfortunately, no," Jack the cat replied,
As he glared at the gnome with a hiss and a sigh.

"Over there," Jack said as pointed to the turnips.
"Use the loo over there, and make it quicker than quick."
"Really?" the dog asked as it tilted its head and stalled.
"Won't that leave some folks a tad bit appalled?"

Jack waved a paw and told the dog, "Don't worry about that.
Now go do your business, and do it faster than fast."
At least the mutt proved himself obedient,
For he walked amongst the turnips, tiptoeing as he went.

Suddenly, the ground beneath the dog did jolt and roll.
Jack declared, "Oh, look, you've awoken the turnip troll!"
Getting cozy in the garden with a purr and a mew,
Jack said, "Don't make him mad, or he'll most definitely eat you."

"Oh me, oh my! I'm so sorry, Mr. Troll!"
The dog did quaver as behind a tree he hastily strolled.
"Please don't eat me!" the dog did yelp,
As he looked around, likely in search of help.

The troll, however, only let out an earth-shaking laugh.
Above the ground, of his bulbous head you could see only the upper half.
He said, "You're mighty funny, dog, yes, you sure are that!"
"Wait, you're not going to eat me?" the mutt whimpered and asked.
The troll questioned, "And what on earth makes you say that?"

Jack the cat could not help but huff and growl.
"Can't you be a proper old grouch of troll?" he hissed with a scowl.
The troll shifted beneath the ground and did ask,
"And why on earth would I go and do that?"

"If you were a truly trollish troll, you could scare away all these guests."
Jack shook out his fur as he added, "As it is, I'll be getting no rest."
"Oh, there are guests?" the troll did bellow.
The ground shook in a manner not even remotely mellow.
"Why don't they bring the party out here?" the turnip troll suggested.
"Around such festivities I would quite like to be amid."

Grumbling, Jack the cat turned to the gnome by the mums and hissed.
"I take it you don't have a single mean bone in your body either?" he asked, miffed.
The gnome's beady little eyes nearly popped out of its bearded little head.
"Why, of course not!" it declared, more serious than the dead.

"Fine," Jack the cat had no choice but to say.
"Just use whatever loo you must, dog, and don't delay.
If I must put up with all this nonsense at the house in which I reside,
Then I insist on at least getting first dibs of that turkey inside." 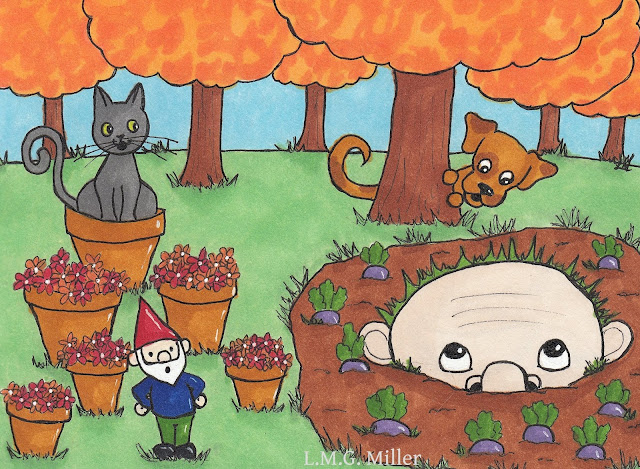 I guess that poem sort of relates to Thanksgiving, but we thought we'd share it a day early nonetheless. So, tomorrow we'll see you for Thanksgiving, on which we'll be participating in the aptly timed Brian's Thankful Thursday Blog Hop. Of course, tomorrow we'll also share the fill-ins statements for this week's Friendly Fill-Ins challenge.

We'll see you tomorrow, friends! Happy Wednesday-before-Thanksgiving to our US friends!

We've been discussing foods that may or may not be safe to share with your furbaby on Thanksgiving. Keep in mind, though, that food safety isn't just related to food preparation and eating. Safety precautions should continue even after you've finished your meal. What are we getting at? We're reminding you to be aware of dishes in the sink and food scraps or wrappers in the trash. If your furbaby licks off of plates in the sink that contain remnants of dangerous foods, or if they find their way into the trashcan where scraps or bones reside, then emergencies can result that way as well. So, be aware and take precautions to keep your pup or kitty safe from dangerous foods even after the feast is over. Immediately rinse or wash plates and keep the sink clear of dangerous food debris. Also take out the trash if it contains dangerous food items, or keep it securely hidden away from your furbaby.
Posted by The Menagerie Mom at 4:56 AM

I love your poem and drawing! This was such a fun photo to work with and you are always so creative. Excellent tips, I bet most people don't think of these things.

What fun! I love the poem and the garden pic, but mostly I love pics of Astrid.

Great story!
Da Boyz like to stretch up, and use their front paws to pull stuff off of the counters, which could include sharp knives or hot stuff! The Hubby is very careful, and we keep those crazy kitties safe!
Happy Thanksgiving!

I love gnomes and trolls, and I'm seeing them in so much Christmas decor this year!

Your poem was so whimsical! And that doodle is so much fun!

And of course, beautiful Astrid always makes us smile.

What a PERFECT poem for the photo this week! And your doodle is likewise perfection. My Mom said she was SURE your poem-story would be EPIC and it is......that photo was just screaming for some amazing stories and fun wasn't it? We hope you have a wonderful Thanksgiving full of love, fun and food. Blessings all around and we are so thankful you are our friends.

Happy Thanksgiving to all of you. Hope you have a wonderful day.

Happy Thanksgiving we are rushing round catching up * paw hugs *