It's Thursday, and that means we're ready to rhyme. After all, it's time for Angel Sammy and Teddy's Thoroughly Poetic Thursday challenge.

As always, our hosts offered a spectacular photo prompt to help guide us on our poetic endeavors.

I honestly adore this image. Ever since childhood, I have loved not only animals, but also fantasy and animals in fantasy stories. You know, animals like that adorable little creature in that there image! So, of course, I decided to try and create a poem that had something to do with that magical little creature in a magical forest. I don't think I did this mesmerizing image any sort of justice, because my rhyme ended up rather random and rambling. But, here it is nonetheless.

The Trouble with Trumble

There once was a girl named Ollie,
Which, by the way, is a name no different than Molly or Polly.
Ollie was a girl with a great many friends,
Even if, amongst them, humanity was not a trend.

Indeed, Ollie's friends were all adorned with feathers and fur.
Most of them were known to let out chirps, growls, and purrs.
Each and every one of Ollie's friends was one-of-a-kind,
And many folk wondered if they were mere figments of Ollie's very own mind.

Even the forest in which her friends did reside seemed surreal.
At least, to the townsfolk who knew Ollie that's how it did feel.
The Enchanted Forest was something quite real to Ollie herself,
Right down to the fairies, floating lights, and even that elf.

Ollie set out on hikes through the Enchanted Forest each and every day,
And it was during one such walk that she heard something dismal and grey.
It was the sound of sniffling and tears being shed.
Ollie changed her path and in that direction did head.

What Ollie found was her good friend Trumble.
He was colorful and fuzzy and was what she called a Mumble,
And he was wiping his tears with a stuffed white bunny named Bumble.
Accompanying Trumble was another of Ollie's friends, named Chitchat.
Chitchat looked very much like a typical cat,
Except she was much, much bigger than that.

Ollie oft found Trumble and Chitchat together,
Something which ended up being quite a bit useful for her.
After all, Trumble could chirp and squeak,
But, unlike Chitchat, he could not speak.

When Ollie found Trumble so very aghast,
She turned to his friend Chitchat and did ask,
"What has Trumble so very sad today?"
Chitchat purred, "His tooth fell out as he ran and played."

Indeed, in Tumble's paw he held something pointy and white.
It was his cute little fang, sparkling in the forest's floating lights.
"Oh, Trumble, that's what has you feeling down?"
Ollie gave him a pat and said, "There's no need to frown!"

"Trumble's so upset he won't even stand.
It sounds like you have some sort of plan?"
The question arose from mammoth Chitchat,
Who stretched and began to preen like any ol' cat.

Ollie smiled and nodded and clapped her hands.
She declared, "There are endless possibilities in this magical land!
Now, you both come along and follow me.
I know exactly where we need to be."

With encouragement from Ollie and nudging from Chitchat,
Trumble finally stood and followed Ollie on her path.
"Where are we going?" asked Chitchat the giant cat.
"You'll see!" was Ollie's only answer to that.

After walking past trees and trees and bumblebees,
And after a great many toadstools and fairy rings they did see,
Ollie finally stopped on a little dirt path.
She said, "See? Look at that!"

Ollie pointed at one of dozens upon dozens of trees,
But there was something special about this one, they could all see.
This tree boasted none other than a door and windows,
Out of which golden light did glisten and glow.

"Yes, this is it! This is where we need to be!"
Ollie's voice was filled with great glee.
"What, exactly, is up with that there tree?"
That was the question that Chitchat did plea.

Pointing at the tree aglow with warm light,
Ollie said, "Don't worry, there is nothing here to cause fright.
You see, this is the home of the one and only Tooth Fairy!
She will help Trumble and make him quite merry."

Chitchat cocked her head,
As she stared at the glowing tree house on the path ahead.
She asked, "The tooth fairy lives in the Enchanted Forest?"
"Yes, of course!" Ollie replied. "And her name is Doris."

The story of course does not end there,
But making this tale any longer would be quite unfair.
Suffice it to say that the Tooth Fairy fixed Trumble right up.
She replaced his tooth and gave him hot cocoa in a cup.
Then, with all of them she did visit and sup.
Yes, indeed, that just about sums it up.

Then again, who knows if this tale is even true?
With such stories, the townsfolk never knew what to do.
Was Ollie a girl who truly went on adventures ever so grand?
Or, was she simply a girl with an imagination that oft got out of hand? 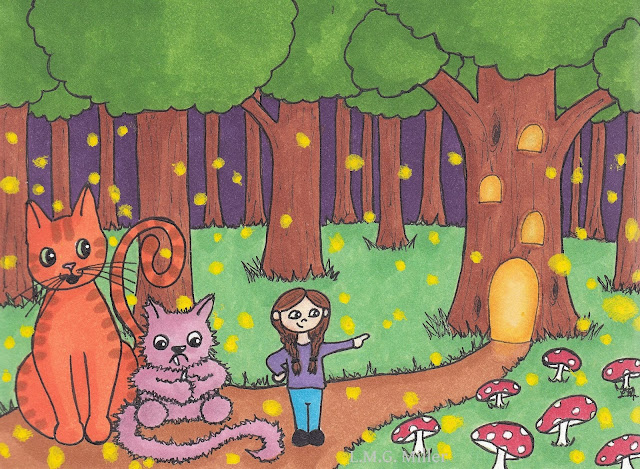 Who's ready for Thimble and her Thankful Thursday gratitudes? You are? Well, good! 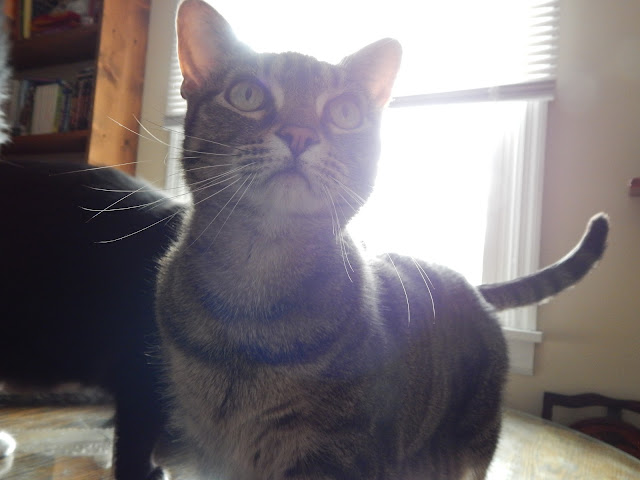 That may look like nothing more than yet another display of my lack of skill in photography lighting, but it actually speaks volumes. For one, Thimble is so incredibly thankful for that sunshine. It's been well below freezing over here in our corner of the world lately, with ice storms and all, so we are grateful for any sun we can get. Also, Thimble is so very grateful for that window. It's one of her favorites from which to snoopervise the neighbors. One of our Christmas trees caused the relocation of that table during the holiday season, and though Thimble loves her some Christmas, she did miss her usual window seat. Now, though, she has it back, with sunshine and all!

As always, today and every day, we are also so very grateful for each and every one of you friends of ours!


Before I share the statements for tomorrow's Friendly Fill-In challenge, I want to extend my most heartfelt thoughts and prayers to my co-host Ellen. Her sweet kitty Tallulah will be gaining her angel wings today. Ellen will not be participating in the Friendly Fill-Ins this week, more than understandably, and she will remain in our prayers and thoughts.

Fly free and high, sweet Tallulah. What a blessed life you lived with your wonderful family, and we know you will be watching over them.

Ellen asked that we continue with the Friendly Fill-Ins challenge like usual. If you would like to participate, I will be sharing the statements now, and tomorrow's Friendly Fill-Ins post and link will be up on my blog at midnight.

We've given a variety of tips regarding today's topic, but we're going to compile them and mention them again today. Today's tip is to keep a close eye on your kitty or pup's water bowl and food bowl during the cold winter months. What do we mean by this? To begin, make sure the water bowl remains full and fresh. To keep warm on cold winter days, we of course run the furnace, or turn on heaters or the fireplace. This is of course crucial for helping our furbabies and ourselves remain warm when it's cold, but this can also lead to increased evaporation of water. This is just one reason to regularly check on your furbaby's water bowl, even on, or especially on, cold winter days. In addition, the furnace and other heat sources can lead to dryness, such as of your kitty or pup's coat and skin. This is another reason why it is crucial to ensure they have sufficient fresh water, as they very well may drink more in order to remain moisturized and comfortable in the dry winter air.

The food bowl might also be affected by the cold weather in the winter. This concept more heavily relates to furbabies who live outdoors or who spend time outdoors in the winter, such as ferals, strays, or those who go outdoors to use the restroom or go on walks. Those who spend time in the cold will often eat more in the winter. This is because when the body breaks down consumed food, it produces energy and heat, which can be crucial for helping a furbaby remain warm in the cold. Therefore, if your furbaby spends time outdoors, keep an eye on their food intake. They may require more food in the winter in order to remain warm and comfortable. Of course, if you have any concerns regarding your furbaby's diet, weight, and overall food and water intake, then do discuss this with your veterinarian.
Posted by The Menagerie Mom at 2:07 AM

Pawsome poem! And glad ya got some sunshine Thimble!

Oh how we just love this poem-story because it captured the magic we ALSO saw in this little creature's "world". We pictured the same scenario about the broken tooth and tooth fairy but you brought it all to life in such a magical way. Thanks so much for participating in Poetic Thursday - we adore your entries every week. We are sad about Miss Ellen's having to help Tallulah to the Bridge but Angel Sammy promised to meet her there.....he's a good "greeter".

We think that little guy is just so cute in his own way. You all have a great day.

A terrific poems indeed, we enjoyed the wee one. We always enjoy seeing the pretty you sweet Thimble. Thanks for joining the Thankful Thursday Blog Hop!

The poem was delightfully, charming, and a whole lot of fun. Why I can even see it used in a children's story with lots of your whimsical illustrations. Have you considered doing this? I understand why Thimble is so thankful to have the sunshine. It's been so cold here, too. We had gray skies yesterday and is expected to be that way for the next several days. Thanks for posting the FF statements. I borrowed them so use tomorrow. Have a TT!

So happy Thimble gets some SUNSHINE today!

Am stunned by Ellen's news about Tallulah...I'm heading over there right now!

I love the poem!

That’s a precious poem, i am so glad Thimble has her favorite window seat back and there’s sun in it, and i am very, very sad about Tallulah.

Your poems are always so wonderful. Thimble looks gorgeous as always. We are thankful for the sunshine too and the warmer weather we had here for just today. Thanks for sharing. Have a wonderful day.
World of Animals

That image is too adorable for words! Mesmerizing for sure, and your poem is just perfect. Enjoy that sunshine, Thimble! Our hearts are breaking for Miss Ellen.