Welcome to another Thursday edition, friends! Our regular visitors might already know what we have in store today. After all, we enjoy the same fun and games every Thursday. To begin, how about some rhyming?

We always enjoy participating in the Thoroughly Poetic Thursday challenge, hosted by Angel Sammy and Teddy. Each week, our hosts give us a photo prompt to guide our poetic adventures. This week's image is this scrumptious one here:

For some reason, even when seeing that colorfully cold dessert, my mind remained stuck in its winter mindset. Even more strangely, I recently heard someone use the term "winter warmth", a phrase I find quite ironic, and I decided to try to let that contradicting concept guide me when writing a rhyme to match that frozen food above. I'm not the biggest fan of my poem for this week, as it ended far more boring and bland that I had hoped. But, here it is nonetheless.

There once were two sisters named Tabby and Cat.
But, the moral of this story is not as simple as that.
You see, Tabby was a bright and lively sort of soul,
Whereas Cat preferred to live a life far more grey and dull.

It was on one cold, windy, winter day,
When Cat hissed that there was nowhere warm to stay.
She and her sister sat in their house,
In which sometimes also resided a sneaky little mouse.

Tabby jumped out of her chair, excited despite the snow.
Her happy voice trilled as she said, "I know somewhere warm we can go!"
"Where?" Cat asked from where she sat hunched up in her chair.
Her mood was just as ruffled as her hair.

"Follow me," was the only reply Tabby had to offer.
Cat sighed, thinking that answer was a bother.
Tabby darted to the door and donned her scarf,
While Cat declared that the thought of the cold was going to make her barf.

Refusing to let Tabby's good mood rub off on her,
Cat asked, "How is going outside going to help? Brrr!"
"I'll show you," Tabby promised as she swung open the door.
The frigid breeze nearly knocked Cat to the floor.

Scarf blowing in the arctic wind,
Cat was certain this sort of weather must surely be a sin.
"I demand to know where we're going," she snapped.
"I'd rather be cold at home, and I forgot my hat."

"Our destination is somewhere really quite grand,"
Tabby practically sang as she hopped and pranced.
Her sister's behavior made Cat feel quick sick.
To Cat, Tabby's good mood made as much sense as arithmetic.

Finally, after what seemed like hours of walking in Antarctica,
Tabby stopped dead in her tracks in that freezing cold tundra.
She pointed ahead, clapped, and did cry,
"See? There's our destination! I see it with my very own two eyes."

Cat squinted across the snowy hills,
And what she saw downright gave her the chills.
"An ice cream parlor?" she did hiss.
Cat was, quite honestly, more than just miffed.

"Ice cream isn't going to keep us warm!" Cat screamed at her sister.
Tabby, however, said, "Yes, it will, or I'm a mister!"
Tabby grabbed her sister and toward the ice cream shop they were careening,
With Cat more or less kicking and screaming.

On that wall over there was a crackling fire beneath a mantle,
Far brighter and warmer than their home's collection of candles.
All around, patrons sat, ate, and did chitter-chatter.
And there was also that noise known as laughter.

Cat put her hands on her hips,
And was about to utter something unsavory from her lips,
When she noticed that Tabby was already giving the workers a tip.
Tabby stood at the counter, making her order.
She said to Cat, "Soon you'll see why this will make you warmer."

Tabby's bowl of freezing cold dessert was already prepared.
It was a heaping bowl of ice cream and berries that left a pleasant smell in the air.
When her sister would not stop commanding her to do so,
Cat scanned the menu and selected a plain and simple ice cream cone.

Despite the fact that her mouth watered,
Cat believed her sister's sanity had truly, finally faltered.
She barely glanced at her ice cream cone when it arrived,
Instead saying, "Ice cream has never kept anyone cold alive."

Tabby guided Cat through the hustling, bustling room,
Greeting this friend and that with laughs and a smile as they did dash and zoom.
They finally sat at a table, with a group of three that Tabby obviously knew.
They chattered and gabbed and giggled as they did lick and chew.

When Tabby noticed Cat sitting back with a frown,
She told her to brighten up and turn that sad thing upside down.
Then Tabby did look at Cat and informed,
"It's not the food or even the temperature that makes a place warm.
You'll very soon learn that it's those around you, and of course the laughs.
Friends and humor are the key to warmth, and that's a fact!" 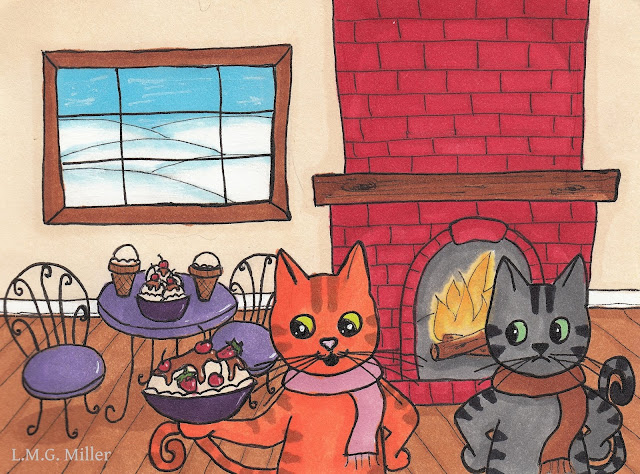 
Just like last week, this week Thimble has continued to be very thankful for her bright and shiny window view from the table. 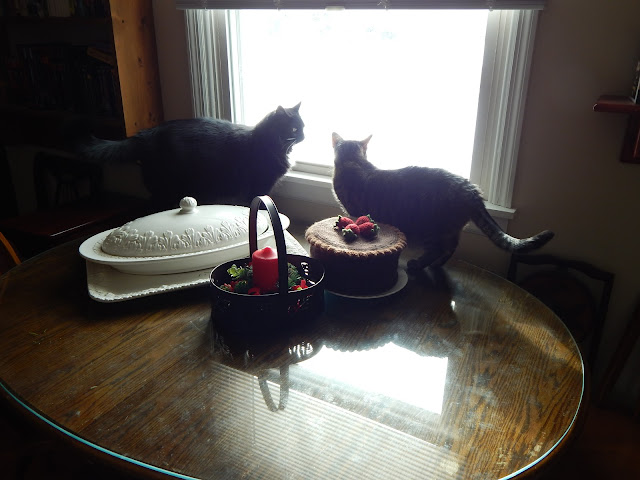 It's been snowy and frigid cold around here lately, and Thimble, as well as Toby and all the kitties, are grateful that they can watch the world from the warmth and safety of a home. We continue to purr and pray for all of those who do not know a loving home, and we hope that all can soon know the warmth of a home.

As always, we are also beyond thankful for this wonderful blogging community, and for all our friends within it. Thank you all for being our friends!

Today is likely our last tip in our winter safety series. For this last tip, we're going to do an overview of winter weather concerns, and remind you of some of the signs to look out for that might indicate a furbaby is struggling with the winter elements. To begin, when outdoors in the cold winter months, closely observe your kitty or pup and watch for shivering, a hunched up position, restlessness, whining, lifting paws off of the ground, redness of the ears, and other signs that the furbaby is becoming too cold. On extremely cold days, frostbite and hypothermia can happen fast, which is why it is not only important to closely monitor a furbaby who might need to venture outdoors even for a short time, but to also reduce time outdoors as much as possible. Also monitor your kitties and pups indoors, and ensure that they are remaining warm with sufficient heating and bedding.

Coldness, frostbite, and hypothermia are not the only issues that can arise in the winter, though. Injury to the paws, for example, is another potential. Pups and kitties who go outdoors can be affected by the cold ground, and by the snow, ice, and ice melts that might cover the ground in the winter. For this reason, be watchful for paw pads that are dry, cracking, bleeding, or otherwise injured, and monitor for lifting of the paws or altered ambulation.

The winter issues don't end there, though, as many more potential concerns can arise from the harsh cold of winter. For example, dryness of winter air and heated homes can lead to dryness of the coat and skin  When it comes to this, be on the lookout for itching, scratching, dander, and a dull coat. Yet another system of the body that can be affected by the winter months is the respiratory system. Dry, cold air can affect asthma and other such ailments, so be on the alert for coughing and other similar signs.

Winter can be a harsh time of the year, as you all certainly know. It can hard on us, and also of course our furbabies. For this reason, always monitor your furbaby, when outdoors but also when indoors. Over the past couple of weeks, we've discussed some of the potential ways to combat the various issues that might arise due to the harsh winter weather. What it comes down to, though, is that it is important to monitor your furbaby, and if you have any concerns regarding their health and comfort, to never hesitate discussing this with your veterinarian in order to keep your kitty or pup as cozy as possible even on those cold winter days.
Posted by The Menagerie Mom at 5:45 AM

That was a wonderfully yummy poem and I could go for some whipped cream about now. Thanks for joining the Thankful Thursday Blog Hop!

Oh I think it's a wonderful poem....with a great message - warmth is where we find it - even in an ice cream parlor with our friends!! Thanks for joining us every week. Thanks too for the reminders about frostbite. Teddy has been very smart - he went on the front porch for about two minutes yesterday and realized he needed to just forget about fresh air until the air is not below zero! Stay cozy.

I have a hot cup of green tea at my side, and I'll make more as the day wears on, just to stave off the soul-crushing cold! Sometimes, we need a wee bit of help seeing the big picture, such as this cold is very hard on warm-blooded things, but it's killing the larvae of some nasty beetles that eat trees around here. There's a downside and upside to everything.

That was excellent. You have such a creative mind, I always enjoy seeing what you come up with. Very cute drawing too. And Thimble is always adorable. Great tips too. My cats are fine, but my hands are cracked and bloody.

Your poem and art are deliciously delightful!

That is such a great poem. We liked that a lot. You all have a good evening.

If someone wants me to eat cold ice cream right now, i had better be allowed to get under the heating pad while doing it.