Happy Thursday! We're all ready to kick off this fine day with a bit of rhyming. After all, it's time for Angel Sammy's Thoroughly Poetic Thursday challenge.

Each week, our hosts offer us a photo prompt to guide our poetic endeavors. This week's image is this mesmerizing one here:

That is one impressive tree! Seeing that image caused a strange series of thoughts and images to run through my head. For some reason, that tree for giants first made me think of some of the scenes in a children's movie I recently watched, and that is Pete's Dragon. In this movie, a little boy finds himself all alone in the woods and is found and essentially raised by a dragon who lives in those woods. My mind then wandered to what it would have been like if that little boy had instead been found by a different giant animal. That's when, for another strange reason I don't know, my mind remember a character my childhood self used to love reading about in a series of books, and that is Clifford the Big Red Dog. I made one little change to that thought, and ended up with the poem below. If you didn't follow that weird train of thought, that's totally fine. I barely even followed it.

Young Kate knew the rules,
And more than just the ones she learned in school.
She lived with her parents beside a forest,
And her mother always told her the same ol' chorus:
"Listen up, Kate, for this is very important.
You are never to wander off into that forest."

Yes, young Kate did know that rule.
Wandering off into the forest would make her a fool.
The problem was that her mind wandered off on its own,
And her legs traveled aimlessly as her mind did roam.

That very thing happened on one fine spring day.
Her mind wandered off while her legs went the other way.
That's how she suddenly found herself deep in the forest.
This realization spurred her stomach to do a flip ever so horrid.

Kate had to admit that the forest was something quite stunning.
Somewhere in the distance, she could hear water running.
All around her, what she saw was green and more green,
Laced into every flower and bush and tree after tree.

Though beauty that did abound and surround,
Kate did not hear a single familiar sound.
She could not hear the sound of her father chopping wood,
Not even when she listened as hard as she could.

Then Kate finally did hear something,
But a chill down her spine it did bring.
It was a stomp stomp stomping sort of sound.
It was like a small earthquake had taken over the ground.

The leaves of the trees and bushes began to rustle.
Had Kate known where to go, she would have hustled.
Instead, she stood frozen in place.
Then she saw the face.

It was big, orange, and fluffy.
In truth, it didn't look the least bit scary or scruffy.
It peaked out from behind a big tree,
So that even its striped tail Kate could now see.

Shock covering her face like a mask,
Kate could not help but ask,
"Who are you? And what are you, if you don't mind?"
"My name is Clifford," the big, orange thing said, no longer shy.
"I'm a Big Red Cat.
I guess there isn't much more explanation than that."

Then it was Clifford's turn for a question.
"You're lost, aren't you?" was his suggestion.
"Yes, I am," Kate did reply.
She could not help but frown and sigh.

"Don't worry," Clifford told the girl.
"I know this forest even better than the squirrels.
I also already know which house is yours,
Because I saw when your family first drove up Route 4."

And so, just like that, Clifford led Kate through the trees.
As they walked, they talked about about everything from geese to cheese.
Before Kate knew it, she could see her house ahead.
"Thank you so very much!" to Clifford she said.

After the Big Red Cat and the girl said their farewells,
Kate could hear her mother ringing the dinner bell.
As the supper bell continued to ding-dong and chime,
Kate ran toward her house, waving to Clifford the whole time.

Kate's mother appeared in front of her daughter.
She said, "Hurry before your father eats all the bread and butter."
As they turned to walk together inside,
A shuffling in the forest could be seen in the corner of the eye.
Kate's mother asked, "What was that?"
"Oh," Kate said with a clap, "that was Clifford the Big Red Cat!"

Kate's mother smiled at her daughter and said,
"Dear, you sure have a wild imagination inside of that head."
Perhaps it was her imagination, and nothing more than that.
Either way, Kate spent many a day with Clifford the Big Red Cat. 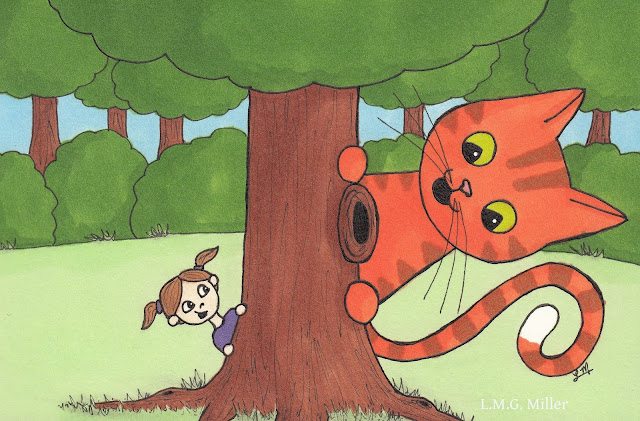 
It's time for the Thimble portion of this Thursday. Thimble has not only her adorable self to show off, but also something which she, and all of us, are so very grateful. 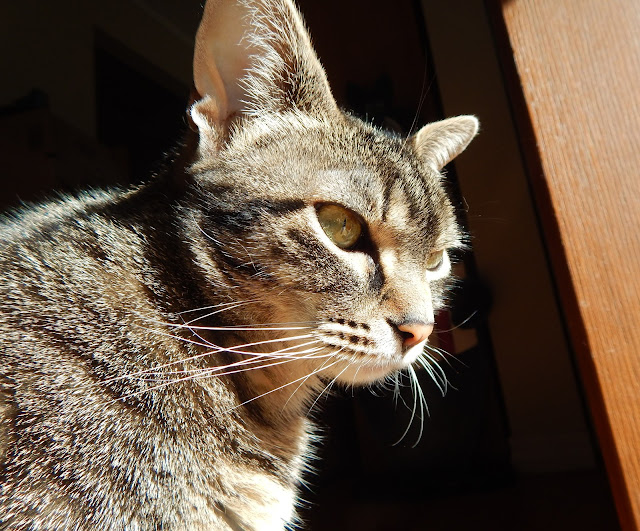 Sunshine! Thimble and every single one of us here are always so happy when the sun decides to shine. It's just so warm and cozy and sun puddles are the best.

Of course, we're also beyond thankful for all of you friends of ours. Our life would be so dull without all of you.

Our second tip relating to heartworms is to know the potential symptoms. Since heartworms can affect the heart and lungs, early symptoms can often resemble those of asthma. Coughing and a lack of desire or an inability to exercise are commonly seen. Other potential signs of heartworm disease include decreased appetite, weight loss, and vomiting. The more severe the heartworm infection, and the longer it is present, the more pronounced the symptoms may be. Severe cases may also involve fluid buildup in the abdomen, as well as acute symptoms of pulmonary or cardiac failure, often due to heartworms causing a blockage. If you have any concerns that your cat or dog might have heartworms, seek veterinary care as soon as possible.
Posted by The Menagerie Mom at 4:54 AM

That poem was very Clifford cool and we enjoyed it. You're sure looking mighty sunny and fine sweet Thimble. Thanks for joining the Thankful Thursday Blog Hop!

We have flooding in our area, but thankfully, not at our place or anyone that we know closely. I love to walk in the woods, but only on paths, since I don't want to run into any poison ivy! I fear that Sweetie may have had heartworms; her sneezing fits frighten me, but the war is between allowing her to live her life as it is, or force her inside and to vet visits. She otherwise seems to be doing very well, so we leave things as they are.

I'm all ready for the friendly fill-ins. Great questions.

Sunshine looks good on you Thimble!

I just can't get over how fun and creative your poems always are!

That was fantastic! I always liked Clifford The Big Red Dog and a cat is even better. Very cute drawing and Thimble is always adorable. Great tips too. I can't wait to see your fill-in answers.

That’s a fun story-poem, Clifford was a favorite around here, too.

What a super story - Clifford the big red cat sounds like ME! I would help a lost little girl too - I really would but I would expect lots of pets in return and maybe a treat. Thanks for playing with Angel Sammy every week for poetry day - we look forward to reading your stories as they always make us smile. Thimble looks like she's enjoying some sun. We all love to see AND feel that sunshine!

We really loved that poem about Clifford. What fun it would be to meet a big big red cat! Thimble enjoy that sun as we have none