The Pup Presents a Poem 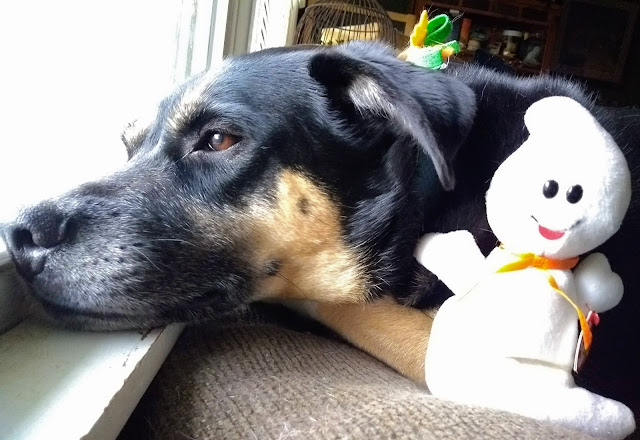 Pup Astrid is still downright annoyed with the ghostly invader haunting our home. She can't even stand to look at him most of the time. 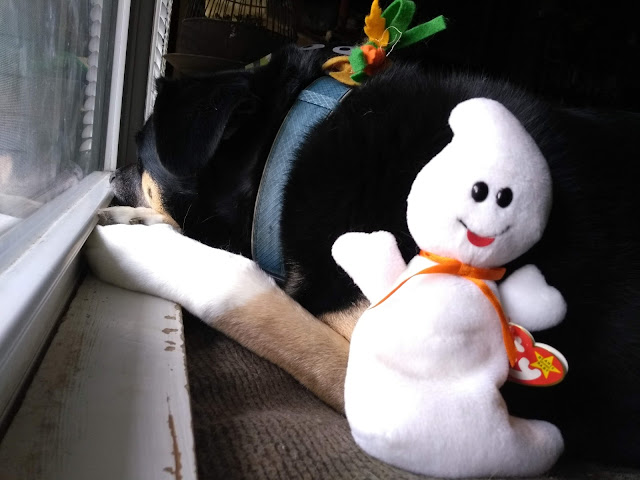 Astrid is at least glad this obnoxious little spooker means Halloween is just around the corner. After all, that means she'll be getting her extra special Halloween cookies in a matter of no time. Since she knows she'll be getting a tasty reward, Astrid actually agreed to share our weekly poem today.

Wait, though. It's not Thursday, is it? No, no it is not. We are indeed sharing our poem one day early. We hope our wonderful host doesn't mind. The reasoning for our schedule change is in large part simply because we'd like to keep our post tomorrow largely focused on the fact that it's Halloween. That's not to say our poem this week isn't a Halloween one, though. We still used this week's photo prompt, seen below, to try to think of something Halloweeny to rhyme up.

It sure took some thinking to sort out a way to work that cute image into a Halloween rhyme. If you'd like to see the insanely long, weird, and wacky result, feel free to read on.

Willa and Wanda knew a spell or two,
Though this was not something they just knew out of the blue.
The two gals had been witches their entire nine decades of life,
Which sometimes caused wonder and other times strife.
With the help of their feline familiars Orange and Black,
Willa and Wanda did all sorts of magical this and that.

Back in their heyday, Willa and Wanda had cast spells galore.
People came to them seven days a week and more.
Those days were in the past now, though,
A fact that made for feelings quite morose.
There was a different sentiment amongst the cats Orange and Black,
Who quite enjoyed retirement and the resulting naps.

As for Willa and Wanda, their hair was grey and their skin no longer supple.
Without glasses, they most often even saw double.
It was Willa who one day did say,
"I cannot take this any longer, nay."

"What are you blabbering on about?" Wanda asked.
She had just awoken from a nap and her voice was full of rasp.
"I don't want to be old and grey."
That was the reply Willa had to say.

Orange and Black both let out meows that revealed they were hard of hearing.
Willa said, "Don't argue, you two, just because you find old age endearing.
Wanda shook her head and threw her hands in the air.
She said, "We've tried everything, Willa. Maybe life's just not fair."
Willa waved a finger and let out a huff.
"I won't admit defeat," she said. "Enough is enough."

Willa disappeared for what might have been hours on end.
Wanda didn't know, because she and the cats took a nap for hours numbering ten.
When Willa came back, she held a dusty old book in her hands.
She said, "You won't believe how far I flew and to what lands.
More importantly, you won't believe what I've come to understand."

Willa plopped the big old book down on the table.
Dust and debris plumed off of it so that the ladies' breathing became unstable.
After coughing and spatting and wiping their nose,
Willa and Wanda were able to again feel more composed.
Orange and Black the cats now sneezed and spluttered.
They slapped at the book with paws that flapped and fluttered.

"Where did you find this dirty old thing?"
Wanda was of course doing the questioning.
"Somewhere," was the answer Willa did manage.
"I went near and far, but it might be Danish."

Then Willa took a step forward and opened the tome.
Through the crinkling old pages she did flip and roam.
"Good grief," she said, "where in tarnation is it?
Oh, there it is! Look! I found the spell that's just the right fit."

Willa pointed to the page on which she settled just then.
Wanda read the page's title: The Spell for Youth and the Prevention of Death.
"Haven't we tried all of these before?" Wanda asked.
Willa said, "Not this one, and I think it's up to the task."

"You know," Wanda said, "I really don't mind getting old.
Something wonderful happens to an aging soul."
Willa said, "Wanda, for goodness sake, look at you.
It's All Hallow's Eve, and in the sky hangs a full moon.
This used to be our time to fly and cast spells all about.
Now you're spending this magical day snoring on the couch."

"So, come on," Willa said with a clap. "Let's give it a try."
In response, Orange and Black hissed, spit, and cried.
Wanda said, "Willa, I think we just need to this matter lie."
"Why?" Willa said. "If we don't at least try, we'll die."
Wanda replied, "Life wouldn't be complete without the goodbyes."

Willa waved a dismissive hand in Wanda's direction.
"Suit yourself," Willa said. "but death is not my intention."
Willa scurried off and began rummaging through the kitchen.
"Where's the eye of newt?" she asked. "This brew requires a smidgen."

Wanda sighed, frowned, and shook her head.
Nevertheless, she told Willa, "It's behind the bread."
Then Willa couldn't find the pumpkin seeds or moldy boot.
Before Wanda knew it, she had her arms filled with the recipe's loot.
Orange and Black did their best to prevent all of this.
They ran between Willa and Wanda's legs, but each time they missed.

"What's the final ingredient?" Willa said, her own arms full.
Wanda juggled her pile and waddled to the table.
There is one final, crucial ingredient, on the page could be read.
It concluded, This ingredient is none other than baby's breath.
This ingredient must be properly measured to ensure freedom from death.
Add baby's breath to the brew in pinches that number seven.

Willa grabbed the baby's breath from the nearest cupboard.
Wanda said, "We'll have to use the big cauldron outside for a brew this absurd."
And so outside they went with their ingredients and spell book.
Only one neighbor was around, and they shot the old women a look.
Orange looked at the neighbor and twitched his tail,
While Black offered a growl, a hiss, and a wail.

Into the cauldron the witches threw in a smidgen of eye of newt,
Followed by a sprinkling of pumpkin seeds and dollop of moldy boot.
When it came to the baby's breath, Willa gave it a long look.
She shook her head and waved a disagreeing hand at the book.
Tilting the baby's breath bottle on its side,
She emptied it all into the brew that now boiled green and bright.

"What are you doing?" Wanda practically yelled.
"That wasn't seven pinches like the recipe instructed in that book of spells."
Willa waved it off and let out a grunt.
She said, "We're witches, Wanda,  we can make magic work how we want.
Baby's breath is sure to be the answer to our youthful desires,
So adding extra is sure to make our chances of success higher."

Willa stirred the brew once, twice, three times more,
Until it was a consistency that could be dipped and poured.
Willa pooled some in a ladle and gave it a taste.
Wanda did the same, not wanting her efforts to go to waste.
Orange and Black the cats leaned over the cauldron and sniffed.
Then they each went in for just a tiny lick.

At first not a single one of them noticed a thing.
"Rats!" Willa said. "Is it really not working?"
Then there was a sudden and strange difference in the world.
Willa wondered, Was the cauldron that big and tall before?

Orange and Black each let out a shriek.
A glance at them revealed they were now young little kitties.
Willa and Wanda then looked at each other,
And realized they looked an age still in need of their mother.

Indeed, Willa and Wanda were no longer old and grey.
They were babies who had to crawl on the ground to move and play.
Wanda tried to shout, "Willa, what have you done?"
Instead, it only came out as babbling, "Goo goo, ga ga, yum yum yum." 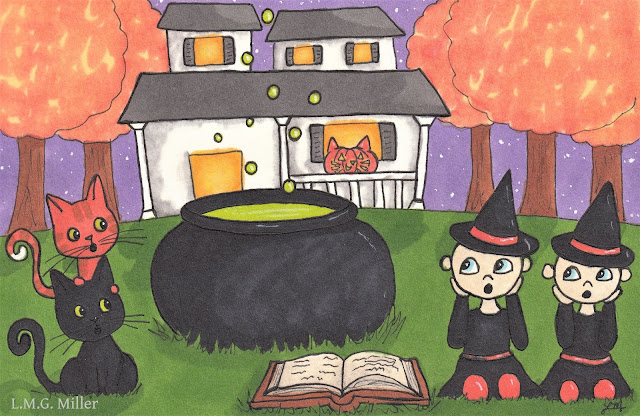 If you enjoy watching horror films or other similar movies for Halloween, keep your furbaby in mind when you adjust the volume. As you all certainly know, cats and dogs have impeccable hearing. A noise that sounds normal and tolerable to us might for them sound far more loud and uncomfortable. So, take into consideration your kitty or pup's heightened sense of hearing when watching movies, especially those with loud music, screams, and so forth. If you are watching a loud movie this Halloween, or any day of the year, be sure that your kitty or pup has a quiet area of the home, away from the television, where they can retreat should they wish to.
Posted by The Menagerie Mom at 5:48 AM

Goes to show, be careful what you wish for! You might want to be young again, but just be specific as to what age!

I don't think there's anything (non animal) cuter than kids dressed up as the elderly. Don't worry, Astrid...your ghostly friend will go away soon!

Astrid is too funny. Excellent poem and drawing to go with it. You are so creative. And great tips too. I always tell my hubby to lower the tv because of the cats. :)

I am with the Eastside cats - be careful which age you wish for. Although I adore the photograph here :-)

Astrid is such a precious pup, and that's a fun poem!

Astrid, we think that ghost will be out of your face pretty soon. Until next year, anyway. What a fun poem *and yes, be careful what you wish for)!

What a GREAT poem you crafted - Willa and Wanda are adorable and very clever! The doodle fits perfectly.........thanks for always making us smile with your Poetic Thursday FUN!