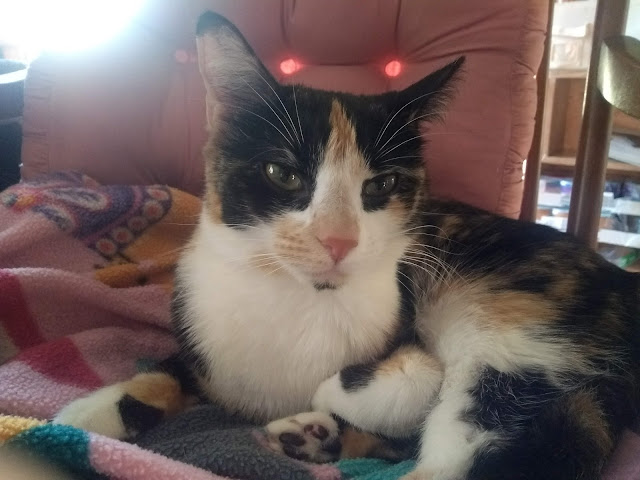 Does Tonks look a tad bit disgruntled here? Yes? That's because she is. I kind of am, too.
Last week I mentioned having some technical difficulties. My WiFi was acting like it didn't know what the 21st century was, and then by the end of the week my scanner was also having trouble working. I indicated that over the weekend I planned on sorting all of that out, and let's just say I didn't fully succeed at that. The WiFi is actually mostly improved now. Mostly. But as for the scanner, which I use to scan and thereby share my art, it's still acting up. Mind you, this scanner is a relatively cheap one that I bought nearly 10 years ago. It's had its fair share of issues over the years, and I'm honestly surprised it's even lasted this long.
Anyway. I've been messing with the scanner for days and thought it was back to its weird but functioning self. As of last night, though, it is definitely not back to its functioning self. I was hoping a good night sleep might sort it out, but it's still not working this morning, so that hope is dashed. Even worse, I didn't get today's A to Z Challenge doodle scanned before I realized that the scanner is really just not okay. After much frustration with the scanner, which was futile and led me nowhere, I'm just going to have to share a different doodle today. Whether my far more tech savvy sister can fix my scanner or whether I go out and buy a new one today, our A to Z Challenge doodles will resume tomorrow, when I'll share the doodles for both today's and tomorrow's respective letters.
Since we always share a doodle of some sort, today's unintended flashback doodle stars angel Rosie and a computer. It seemed fitting, given our technical difficulties. 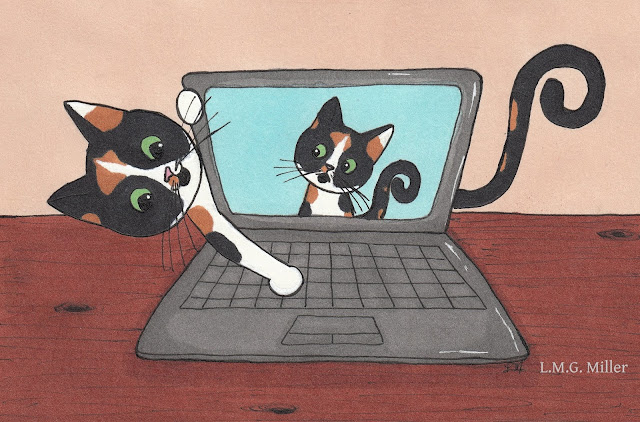 This doodle is actually from the 2019 A to Z Challenge. It looks nothing like the one that's supposed to be shared today, but you'll see that for yourself tomorrow.
Happy Tuesday!
***
Trivia of the Day
Many cats love computers. They love laptops. They love lying our your keyboard when you're trying to use it. Is this the case for you and your kitty? If so, can you guess why your cat is so keen on snoozing on your laptop? There are two very possible reasons, and you can probably guess at least one or both of them. One reason is that computers can get warm when powered up and running, and cats love warmth, so in their minds this warm computer is a great place to snooze. Another very possible reason that cats steal laptops from humans is to get attention. If the computer has your attention and your cat wants your attention instead, then kitty simply must get between you and the computer. A cat's gotta do what a cat's gotta do!
Posted by The Menagerie Mom at 6:29 AM

Tonks, I understand how you feel. Computer problems are no fun! ~Ernie

Tonks, we understand when technology starts giving you problems it can be a pain sometimes. We hope the scanner starts working again or if you have to buy a new one but we are always glad to see any of your doodles. Thanks for sharing. Have a great day and good luck.
World of Animals Rittenhouse

Sorry you are having technical difficulties. The flashback drawing is adorable and so is Tonks. Trouble especially loves sitting on my laptop.

Angel Rosie looks quite techy! Wishing you the best of luck...technology sure can be stressful and frustrating.

To err is human, but to really foul things up requires technology. Good luck with the scanner.

Tech issues are the worst! We don't blame you and Tonks for being disgruntled. :(

We are glad to see your Doodle and the problems with the web and systems can cause a fit. We use Canon Multi Scan print as we send a lot of cards out for Cat Scouts. Works like a charm and you can set things which drives us crazy on some things

As another who has recently been dealing with wifi problems, I understand!
I miss the huge copier/scanners at the office; they are massive, and do all kinds of things without a problem.