Mancat Monday and the Letter V

Evan is a tad bit concerned. 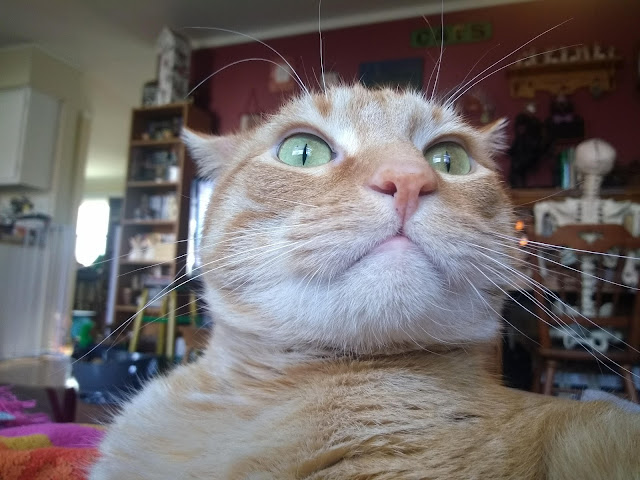 He was just told there's a skeleton sitting at the desk behind him. Do you see that? What kind of nonsense is going on at our house? Evan would sure like to know.
***
Now, of course, we have another installment of the A to Z Challenge.

Our theme is still, strange as it is, halfway to Halloween, or Halfoween. Today's letter is V, and V of course stands for vampire. 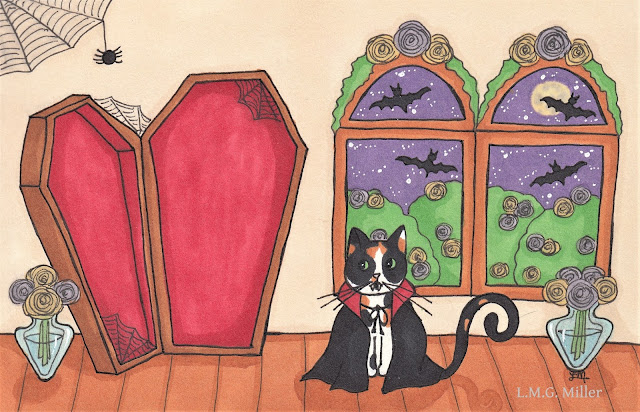 Poor Rosie. Someone turned her into a vampire. How rude.
***
Did you know?
Did you know that cats cannot chew their food in the way humans can? For example, cats cannot grind their food with their teeth. Their teeth more so cut or slice their food. This makes sense when you compare human molars to cat molars. Human molars are flat, which allows us to crush our food. A cat's molars, though, are sharp and pointed, and therefore they cut up their food in their mouth. Cats also cannot chew in the same way humans can because cats' jaws can only move up and down, whereas humans can move their jaws up and down as well as side to side. Since cats cannot move their jaws side to side, they have to tilt their head to move the food around, which is just another way cats cannot chew food the same way humans can.
Posted by The Menagerie Mom at 8:11 AM

Evan is such a cutie. I like the drawing even though I don't like vampires, Rosie is the exception. I did not know that about cats and chewing.

That guy at the desk has been on Zoom for way too long.
Evan - you look just like our Tyler! Such a handsome face.
Midnight & Cocoa
Mini & Fluff
Tyler & Marty
Beeb, Beanie & Bella

What a face, Evan!
I just finished reading "Dracula", and was surprised at how good it was!
The vampires aren't the centerpiece of the story; the characters and storylines were much deeper than I'd anticipated.

MOL what an adorable face!

Looks like the place is haunted all the way around.