Woof Woof Wednesday with the Letters K and L

I think our technical difficulties we've been discussing as of late are coming to an end. I believe I have the WiFi and scanner issues sorted out as of this morning. At least, I hope that's the case. Fingers and paws crossed. Maybe I should rub pup Astrid's nose for good luck? 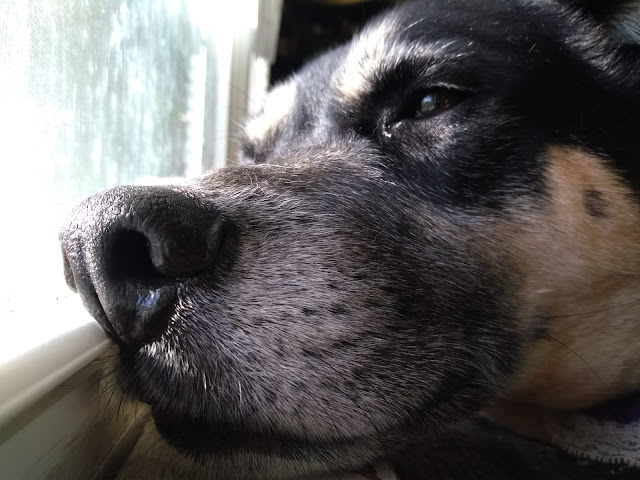 Wait, no, Astrid says phooey to that idea. 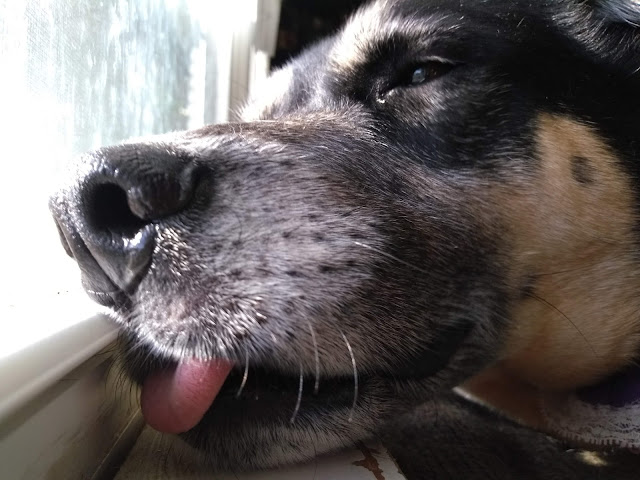 And now that we have a functioning scanner again, how about we share our A to Z Challenge doodles for both yesterday and today?

For anyone who hasn't heard us say this yet, our A to Z theme is Halfoween, because April is halfway to Halloween. Sound weird? Yes? I don't disagree, but I still dig it, so I'm going to keep going with it.

Anyway. Thanks to a malfunctioning scanner, we couldn't share our doodle for the letter K yesterday. So, let's share it first today. What does K stand for? I went with knife, and I did so honestly because it reminded me of the classic, knife-wielding Halloween character Michael Myers. 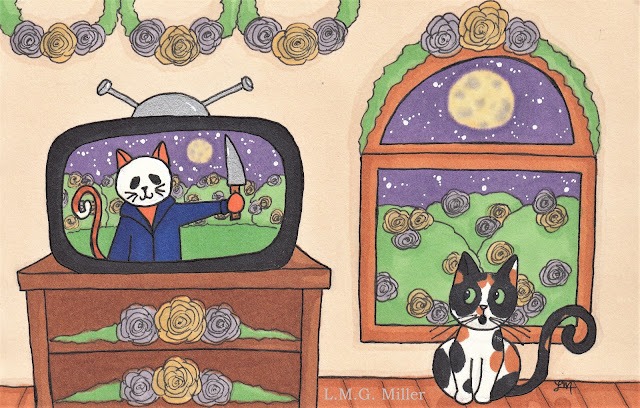 Not only did Rosie have to see that weird scene on the TV during this month of April, but she had to witness something even weirder for today's letter L. I decided to have L stand for Lovecraft. As in H.P. Lovecraft, one of the original, master writers of horror. Lovecraft was largely famous for creating Cthulhu, an octopus-like creature known by many horror fans. Rosie hung back a bit for this one, because who wants to get close to this? 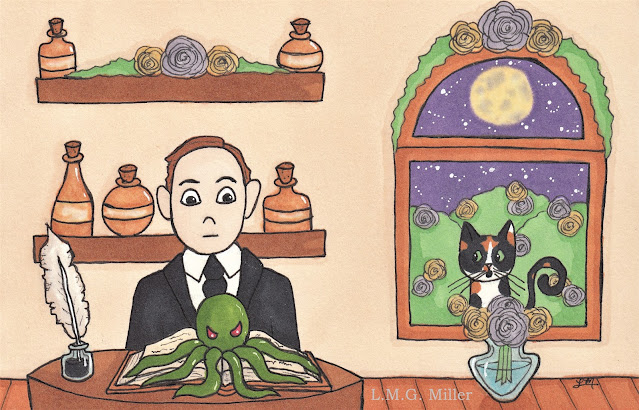 Rosie has no interest in being a friend of Lovecraft's Cthulhu. What do you all think? Does Cthulhu look friendly crawling out of that book there?
Happy Wednesday, friends!

One of our doodles today involves a knife, as you might have noticed. We would give a tip today on keeping knives out of your furbaby's reach, but we've already discussed that topic multiple times, and you all surely already know the importance of that. So, how about we discuss a different sharp object?

Let's talk about needles. Throughout the life of some furbabies, they may require at-home treatments that involve needles. This might mean they're subcutaneously receiving insulin for diabetes, receiving fluids for kidney or other similar diseases, or they even might be receiving vitamins or other similar medications by way of needle. If you do find yourself with used needles at your home as a result of your kitty or pup's care, don't just throw them in the trash. According to the CDC, each year roughly 600,000 people are injured by needles not properly disposed of. And that's just one example as to why disposing of needles with typical trash can be a dangerous thing. When it comes to those needles, it is best they be disposed of in a more proper way. You can discuss with your veterinarian possible options for sharps disposal, as it's often called. Some veterinarians will even allow you to bring the used needles back to their facility and will dispose of them for you. There are also certain pharmacies that might be able to assist you with the disposal of needles. If your veterinary office does not take used needles for disposal, simply familiarize yourself with your community's guidelines and find a pharmacy or other similar business in your area where needle disposal is accommodated. This is for the safety of other people, animals, and even the environment.

Astrid is a cutie. I love both of these drawings- very creative. And great tips too. Some vets charge a lot to take back the needles which I think is wrong.

We hope your problems are all fixed!! Our Fire Department takes needles.

Astrid has no trouble making her opinion known.

Love the doodles, i'm with Rosie i will stay back.

We love the doodle of H.P. Lovecraft at his Cthulhu. But Rosie, we're with you ... we don't think ity would make a good friend.

Whoa those are some scary doodles but we like them a lot! Astrid that tongue has way more luck than your nose, right?